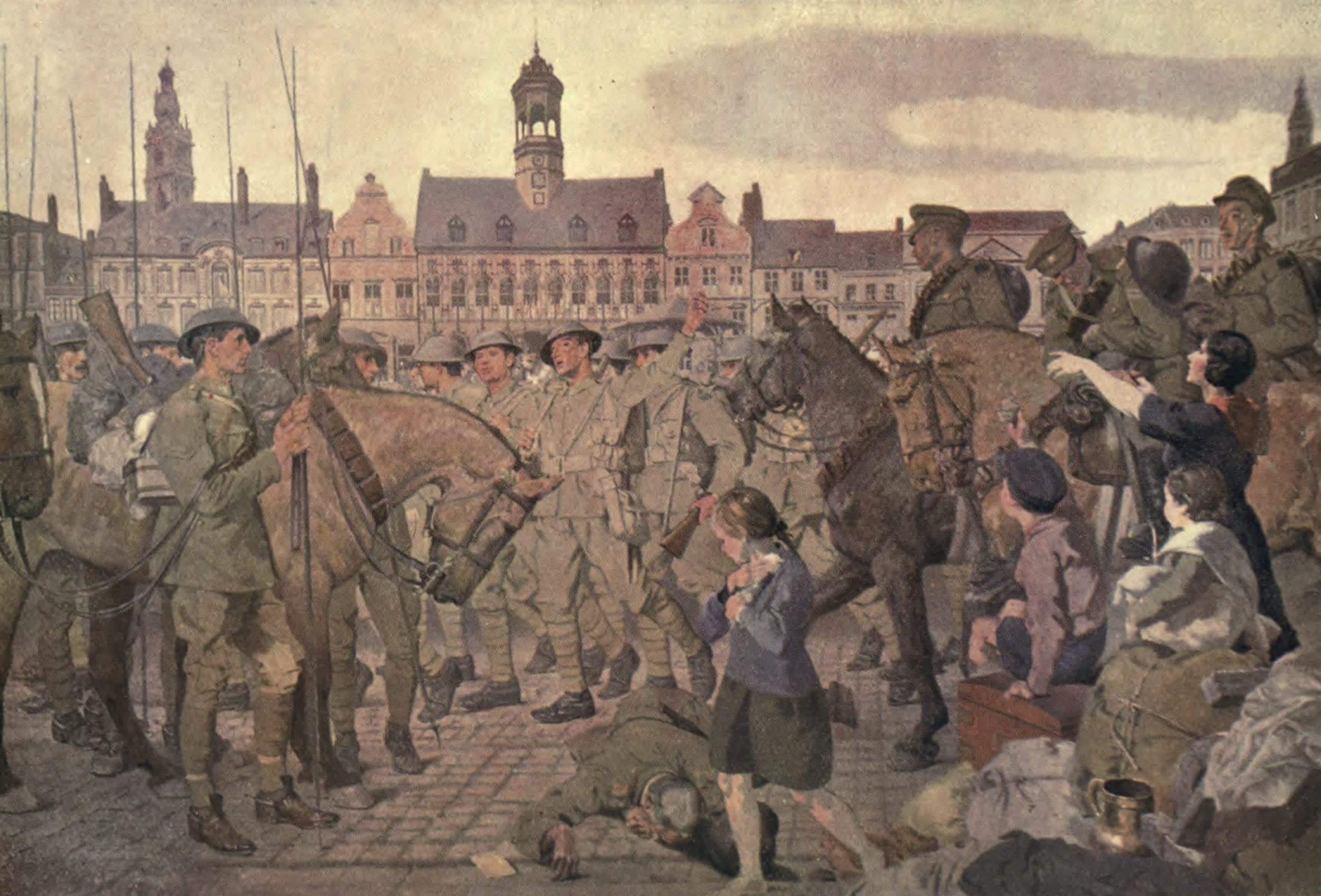 World War I (often abbreviated as WWI or WW1), also known as the First World War or the Great War, was a global war that lasted from 28 July 1914 to 11 November 1918. Contemporaneously described as "the war to end all wars", it led to the mobilisation of more than 70 million military personnel, including 60 million Europeans, making it one of the largest wars in history. It is also one of the deadliest conflicts in history, with an estimated nine million combatant deaths and 13 million civilian deaths as a direct result of the war, while resulting genocides and the related 1918 influenza pandemic caused another 17–100 million deaths worldwide.

On 28 June 1914, Gavrilo Princip, a Bosnian Serb Yugoslav nationalist, assassinated the Austro-Hungarian heir Archduke Franz Ferdinand in Sarajevo, leading to the July Crisis. In response, Austria-Hungary issued an ultimatum to Serbia on 23 July. Serbia's reply failed to satisfy the Austrians, and the two moved to a war footing. A network of interlocking alliances enlarged the crisis from a bilateral issue in the Balkans to one involving most of Europe. By July 1914, the great powers of Europe were divided into two coalitions: the Triple Entente, consisting of France, Russia, and Britain; and the Triple Alliance of Germany, Austria-Hungary, and Italy.

The Triple Alliance was only defensive in nature, allowing Italy to stay out of the war until April 1915, when it joined the Allied Powers after its relations with Austria-Hungary deteriorated. Russia felt it necessary to back Serbia, and approved partial mobilisation after Austria-Hungary shelled the Serbian capital of Belgrade on 28 July. Full Russian mobilisation was announced on the evening of 30 July; the following day, Austria-Hungary and Germany did the same, while Germany demanded Russia demobilise within twelve hours. When Russia failed to comply, Germany declared war on Russia on 1 August in support of Austria-Hungary, the latter following suit on 6 August; France ordered full mobilisation in support of Russia on 2 August.

Germany's strategy for a war on two fronts against France and Russia was to rapidly concentrate the bulk of its army in the West to defeat France within six weeks, then shift forces to the East before Russia could fully mobilise; this was later known as the Schlieffen Plan. On 2 August, Germany demanded free passage through Belgium, an essential element in achieving a quick victory over France. When this was refused, German forces invaded Belgium on 3 August and declared war on France the same day; the Belgian government invoked the 1839 Treaty of London and, in compliance with its obligations under this treaty, Britain declared war on Germany on 4 August.

On 12 August, Britain and France also declared war on Austria-Hungary; on 23 August, Japan sided with Britain, seizing German possessions in China and the Pacific. In November 1914, the Ottoman Empire entered the war on the side of the Central Powers, opening fronts in the Caucasus, Mesopotamia, and the Sinai Peninsula. The war was fought in (and drew upon) each power's colonial empire also, spreading the conflict to Africa and across the globe. The Entente and its allies eventually became known as the Allied Powers, while the grouping of Austria-Hungary, Germany and their allies became known as the Central Powers.

The German advance into France was halted at the Battle of the Marne and by the end of 1914, the Western Front settled into a battle of attrition, marked by a long series of trench lines that changed little until 1917 (the Eastern Front, by contrast, was marked by much greater exchanges of territory). In 1915, Italy joined the Allied Powers and opened a front in the Alps. Bulgaria joined the Central Powers in 1915 and Greece joined the Allies in 1917, expanding the war in the Balkans.

The United States initially remained neutral, though even while neutral it became an important supplier of war materiel to the Allies. Eventually, after the sinking of American merchant ships by German submarines, the declaration by Germany that its navy would resume unrestricted attacks on neutral shipping, and the revelation that Germany was trying to incite Mexico to initiate war against the United States, the U.S. declared war on Germany on 6 April 1917. Trained American forces did not begin arriving at the front in large numbers until mid-1918, but the American Expeditionary Force ultimately reached some two million troops.

Though Serbia was defeated in 1915, and Romania joined the Allied Powers in 1916 only to be defeated in 1917, none of the great powers were knocked out of the war until 1918. The 1917 February Revolution in Russia replaced the Tsarist autocracy with the Provisional Government, but continuing discontent with the cost of the war led to the October Revolution, the creation of the Soviet Socialist Republic, and the signing of the Treaty of Brest-Litovsk by the new government in March 1918, ending Russia's involvement in the war. This allowed the transfer of large numbers of German troops from the Eastern to the Western Front, resulting in the German March 1918 Offensive, which was initially successful but failed to score a decisive victory and exhausted the last of the German reserves.

The Allies rallied and drove the Germans back in their Hundred Days Offensive, a continual series of attacks to which the Germans had no reply. Bulgaria was the first Central Power to sign an armistice—the Armistice of Salonica on 29 September 1918. On 30 October, the Ottoman Empire capitulated, signing the Armistice of Mudros. On 4 November, the Austro-Hungarian empire agreed to the Armistice of Villa Giusti. With its allies defeated, revolution at home, and the military no longer willing to fight, Kaiser Wilhelm abdicated on 9 November and Germany signed an armistice on 11 November 1918, effectively ending the war.

World War I was a significant turning point in the political, cultural, economic, and social climate of the world. The war and its immediate aftermath sparked numerous revolutions and uprisings. The Big Four (Britain, France, the United States, and Italy) imposed their terms on the defeated powers in a series of treaties agreed at the 1919 Paris Peace Conference, the most well known being the German peace treaty: the Treaty of Versailles. Ultimately, as a result of the war the Austro-Hungarian, German, Ottoman, and Russian Empires ceased to exist, with numerous new states created from their remains. However, despite the conclusive Allied victory (and the creation of the League of Nations during the Peace Conference, intended to prevent future wars), a second world war followed just over twenty years later.