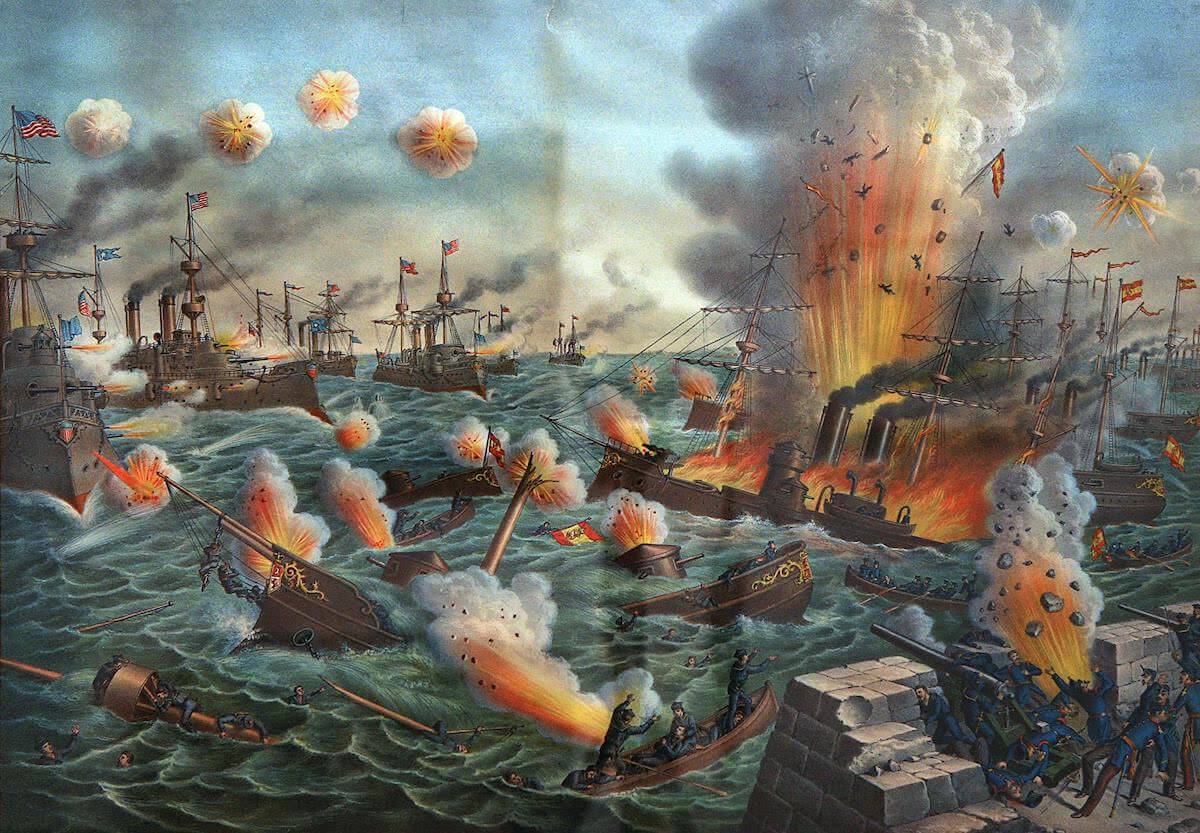 The Spanish-American War was a war between Spain and the United States, which took place in 1898. It arose in large part out of the condition of affairs in Cuba, where Spanish oppression had led to outbreaks for several generations, in some of which American citizens had been involved.

The Cubans had revolted in 1895 and the revolt had been suppressed by the Spanish authorities with much ruthlessness. The severity merely drove discontent under cover and sporadic acts of violence continued with an accompaniment of hardship to the civil population to which the people of the United States could not remain indifferent.

As a result of a decision in the direction of intervention come to by the United States Government, Secretary of State Richard Olney offered on April 6, 1896, the friendly offices of the United States for the purpose of saving Cuba from impoverishment and of ameliorating the condition of foreigners in the country.

The offer was rejected by the Spanish Government and President Cleveland, in his annual message to Congress in December, 1896, referred to the obligations which might devolve on the United States if Spain should show itself incapable of coping with conditions. Shortly after President McKinley was inaugurated things began to come to a head and Congress appropriated $50,000 for Cuban relief. As the relations between the two countries had begun to assume a critical aspect General Weyler, whose severity had earned for him the hatred of the Cuban population, was recalled by the Spanish Government and General Blanco commissioned to take his place.

A period of plain speaking on the part of the United States succeeded and in response to a declaration that the United States could not view with indifference the indefinite prolongation of existing conditions the Spanish Government promised that on the restoration of order it would establish local autonomy in the island. In the meantime an influential element in the United States promoted the feeling in favor of war, and fuel was added to the flame by the publication of a letter written by the Spanish Minister criticizing President McKinley, which had been stolen from the mails.

Explosion of the Maine

Early in 1898, however, the tragic event occurred which had the result of precipitating the conflict, for on the evening of Feb. 15 the United States battleship "Maine" was blown up in Havana harbor, with a loss of 266 men. The responsibility for the act was never fully demonstrated, though investigations were made by boards appointed both by the United States and Spain. The American board reported that a submarine mine was the cause of the explosion, and the general sentiment laid the culpability at the door of the Spanish authorities. As a result of the warlike feeling engendered in the United States, Congress, on March 8, appropriated $50,000,000 for national defense, and on March 11 mobilization of the regular army was begun.

President McKinley had entered into pourparlers with the Spanish Government, but not satisfied by its representations decided to lay the matter before Congress. Meanwhile the Cuban Junta demanded recognition as the lawful government, and on April 19 Congress declared the people of Cuba free and independent, demanded the surrender of Spanish authority over the island, and empowered and directed the President to enforce this resolution by the army and navy. An ultimatum embodying these demands was signed and despatched by the President on April 20, and Spain was given until the 23d to make a satisfactory reply. The Spanish Minister in reply demanded his passports and the American Minister in Madrid was handed his passports. Spain declared war on April 24 and the United States followed suit on April 25.

Naval action followed almost at once. Captain W. T. Sampson bombarding Matanzas on April 27. Meanwhile Commodore Dewey, stationed at Hongkong, received orders to proceed to the Philippine Islands and commence operations at once against the Spanish fleet, capturing or destroying the vessels. The order had been sent on the day of the declaration of war and five days later he approached under cover of darkness Manila harbor, having under his command 9 vessels and 131 guns. The fight that followed in the early morning after his entry was an unequal one.

The battle lasted four hours and resulted in the destruction of the Spanish fleet, consisting of 10 vessels, 120 guns, and 1,796 men, as it lay at anchor in Cavite Bay, and the local fortifications. The loss on the American side included only six wounded. Meanwhile the portion of the Spanish fleet located in Cuban waters was locked up in Santiago Bay by the fleet under Captain Sampson, and worldwide interest was aroused by the attempt of Lieut. R. P. Hobson to make escape impossible by the sinking of the collier "Merrimac" at the harbor mouth. Finally the Spanish fleet under Admiral Cervera put out to sea on July 3. In the conflict that followed, the Spanish ships were either destroyed or driven ashore, with a loss of 350 men killed and 1,700 captured. The loss on the American side was 1 killed and 10 wounded.

The battles on land were less unequal. On June 20 Gen. W. R. Shafter landed at Daiguiri with 815 officers and 16,072 men, the Spaniards withdrawing to their entrenchments near Santiago. At Las Guasimas American troops under General Wheeler dislodged the Spanish troops with a loss of 68 men, killed and wounded, the Spanish losing 28. In July United States troops aided by Cubans attacked the Spanish front at El Caney and San Juan. On July 16, following a siege, Santiago capitulated, under an agreement by which Spanish soldiers were to be taken to Spain. Meanwhile a brief campaign of over two weeks (July 25-Aug. 13), under Gen. Nelson A. Miles in Porto Rico, ended with an armistice.

End of the War

On Aug. 13 the city of Manila surrendered to Admiral Dewey and General Merritt, and 13,000 soldiers surrendered. Then after less than four months of fighting peace preliminaries were begun through the French Ambassador and on Aug. 12 the peace protocol was concluded. The subsequent pourparlers endured till Dec. 10, when the treaty was signed in Paris, under which Spain withdrew from Cuba, Porto Rico, Guam and the Philippines, the United States paying $20,000,000. The political status of the inhabitants of the ceded countries was to be determined between them and the United States Government.