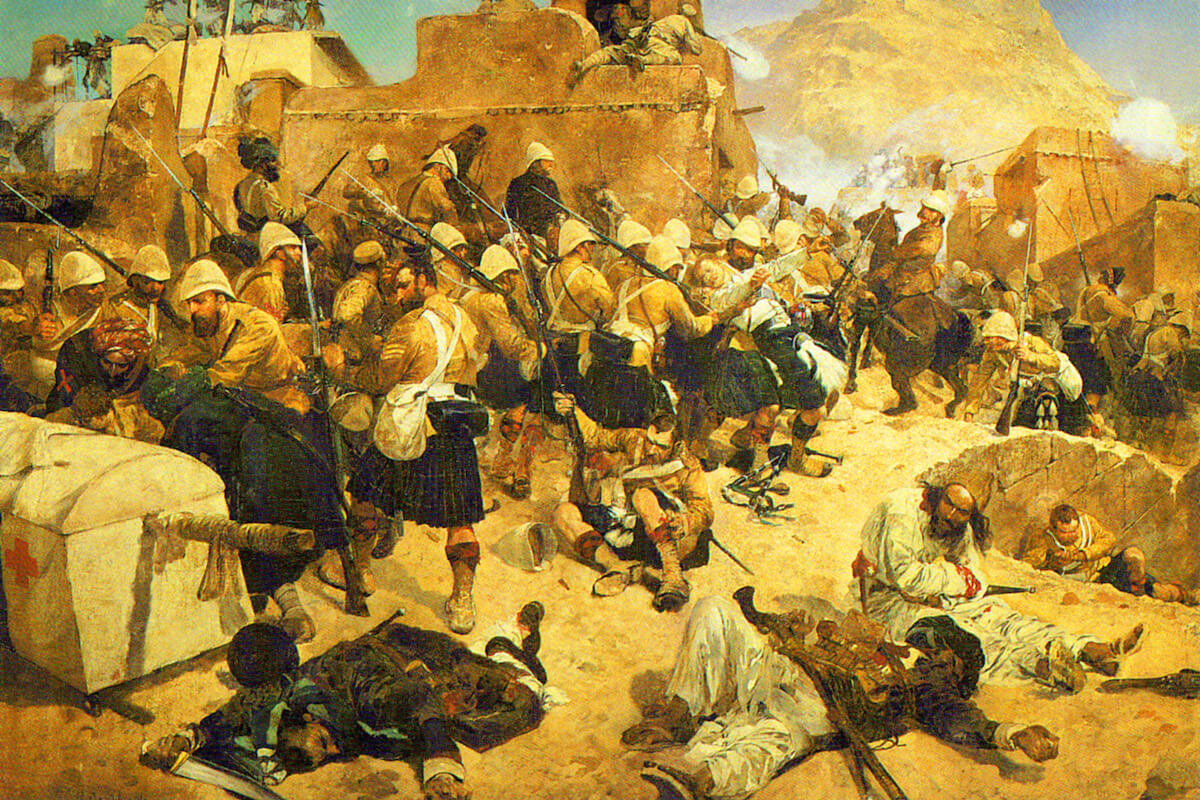 Second Anglo-Afghan War, 1878–80.—In the course of the following year (1878) the Russian government, to counteract the interference of England with their advance upon Constantinople, sent an envoy to Kabul empowered to make a treaty with the amir. It was immediately notified to him from India that a British mission would be deputed to his capital, but he demurred to receiving it; and when the British envoy was turned back on the Afghan frontier hostilities were proclaimed by the Viceroy in November 1878, and the second Afghan War began.

Sir Donald Stewart's force, marching up through Baluchistan by the Bolan Pass, entered Kandahar with little or no resistance; while another army passed through the Khyber Pass and took up positions at Ialalabad and other places on the direct road to Kabul. Another force under Sir Frederick Roberts marched up to the high passes leading out of Kurram into the interior of Afghanistan, defeated the amir's troops at the Peiwar Kotal, and seized the Shutargardan Pass which commands a direct route to Kabul through the Logar valley.

The amir Shere Ali fled from his capital into the northern province, where he died at Mazar-i-Sharif in February 1879. In the course of the next six months there was much desultory skirmishing between the tribes and the British troops, who defeated various attempts to dislodge them from the positions that had been taken up; but the sphere of British military operations was not materially extended. It was seen that the farther they advanced the more difficult would become their eventual retirement; and the problem was to find a successor to Shere Ali who could and would make terms with the British government. In the meantime Yakub Khan, one of Shere Ali's sons, had announced to Major Cavagnari, the political agent at the headquarters of the British army, that he had succeeded his father at Kabul. The negotiations that followed ended in the conclusion of the treaty of Gandamak in May 1879, by which Yakub Khan was recognized as amir; certain outlying tracts of Afghanistan were transferred to the British government; the amir placed in its hands the entire control of his foreign relations, receiving in return a guarantee against foreign aggression; and the establishment of a British envoy at Kabul was at last conceded.

By this convention the complete success of the British political and military operations seemed to have been attained; for whereas Shere Ali had made a treaty of alliance with, and had received an embassy from Russia, his son had now made an exclusive treaty with the British government, and had agreed that a British envoy should reside permanently at his court. Yet it was just this final concession, the chief and original object of British policy, that proved speedily fatal to the whole settlement. For in September the envoy, Sir Louis Cavagnari, with his staff and escort, was massacred at Kabul, and the entire fabric of a friendly alliance went to pieces.

A fresh expedition was instantly dispatched across the Shutargardan Pass under Sir Frederick Roberts, who defeated the Afghans at Charasia near Kabul, and entered the city in October. Yakub Khan, who had surrendered, was sent to India; and the British army remained in military occupation of the district round Kabul until in December (1879) its communications with India were interrupted, and its position at the capital placed in serious jeopardy, by a general rising of the tribes. After they had been repulsed and put down, not without some hard fighting, Sir Donald Stewart, who had not quitted Kandahar, brought a force up by Ghazni to Kabul, overcoming some resistance on his way, and assumed the supreme command.

Nevertheless the political situation was still embarrassing, for as the whole country beyond the range of British effective military control was master less, it was undesirable to withdraw the troops before a government could be reconstructed which could stand without foreign support, and with which diplomatic relations of some kind might be arranged. The general position and prospect of political affairs in Afghanistan bore, indeed, an instructive resemblance to the situation just forty years earlier, in 1840, with the important differences that the Punjab and Sind had since become British, and that communications between Kabul and India were this time secure.

There are no works available for the Second Anglo-Afghan War collection.