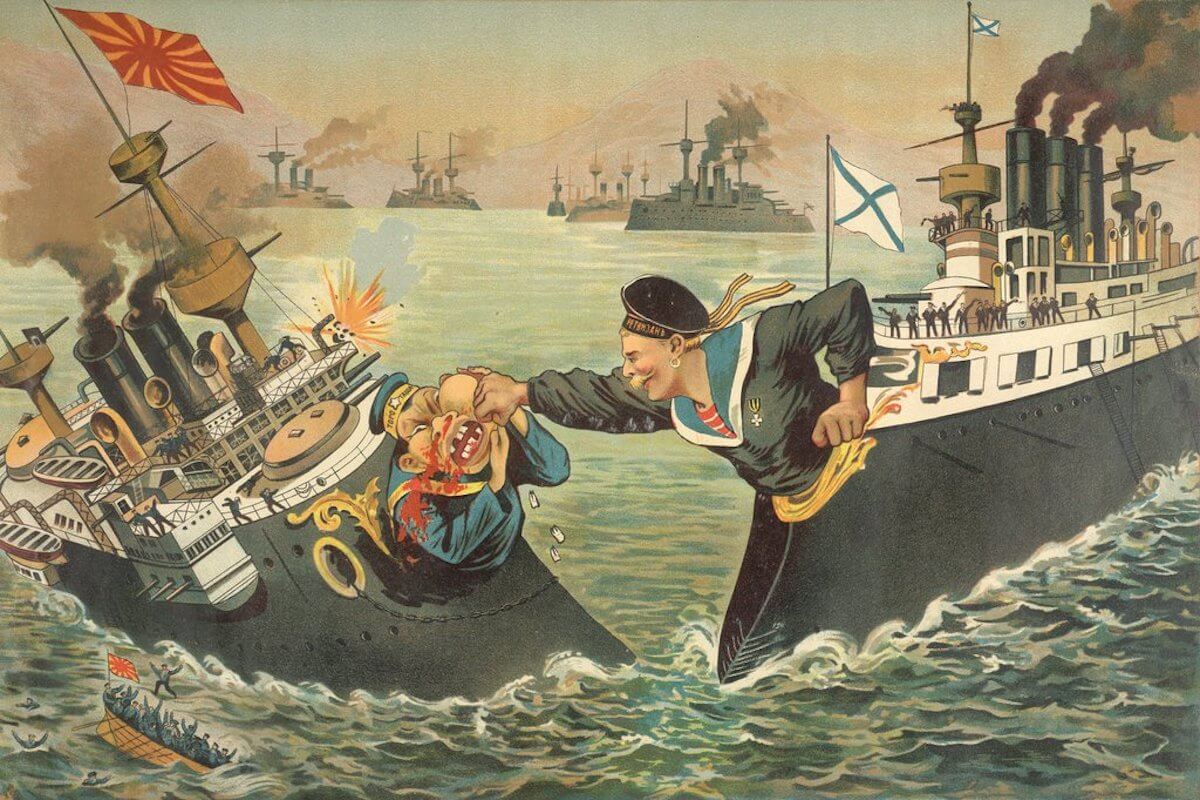 Russo-Japanese War, The, of 1904–1905 has great military interest. It not only tested the strength of two powers, with surprising results, but it tested modern weapons of naval warfare in a unique way. Moreover, it marks a great era in the national life of Japan; and seems to presage general awakening of Asia.

It concerned England very directly by relieving her of anxiety about India, and by the fact that she was Japan’s ally, bound by a treaty of 1902 to assist Japan if a third power should interpose in the hostilities. It affected America vitally, because of the close vicinity both of Japan and Russia to the American shores.

In 1894 Japan had been robbed of the greater part of the fruits of her victory over China by the ultimatum of Germany, France and Russia, which demanded that she should withdraw from the Liaotung Peninsula. Japan submitted; but silently worked until she had prepared a first-class army and navy.

In 1902 Russia agreed to withdraw her troops by instalments from Chinese territory. She violated her agreement. In 1903 Japan made certain proposals for a good understanding with Russia. During the negotiations which followed Russia strengthened her army in Manchuria and her navy in the East. On February 6th, 1904, Japan broke off negotiations and recalled her minister from Russia.

Japan struck the first blow by a torpedo attack upon the Russian squadron which lay in the outer roadstead of Port Arthur (February 8th). This attack was followed by a bombardment at long range by the fleet of Admiral Togo on the 9th. Czar Nicholas proclaimed war on Feb. 10th.

The first Japanese army under Kuroki marched from Chemulpo, Korea, across Yalu River and won a victory over the Russian forces near Antung. Kuroki pursued the Russian troops toward Liaoyang, and meantime three other Japanese armies landed on the Liaotung peninsula under Generals Oku, Nogi and Nodzu. On May 21 Oku fought and won the battle of Nanshan Hill, cutting off Port Arthur from the Russian army under Kuropatkin at Liaoyang.

The Japanese armies were then divided, Nogi with a strong force going south to invest Port Arthur, while the other divisions joined in an advance on Liaoyang. Stakelberg with a Russian force of 35,000 men was sent south to the relief of Port Arthur, but was met and defeated with heavy loss by the Japanese under Oku. Kuropatkin, with 170,000 men and 400 guns, was attacked at Liaoyang by the combined armies of Kuroki, Oku and Nodzu, numbering 200,000 men and 500 guns and under the chief command of Marshal Oyama.

The battle lasted from Aug. 26 until Sept. 4 and resulted in the defeat of the Russians with a loss of more than 22,000 men. Kuropatkin halted at Sha River, and here on Oct. 9–11 he attacked the Japanese and was defeated, losing nearly 70,000 men. The active siege of Port Arthur began about August 1st, 1904, the Japanese force under Nogi numbering more than 100,000. Desperate fighting occurred from time to time until a hill was captured by the Japanese, from which they could see the town and harbor of Port Arthur.

They were thus enabled to get accurate range and shell the town and harbor until the Russian warships in port were sunk and the town in large part destroyed. Port Arthur was surrendered by Stoessel on Jan. 1, 1905, with 32,000 prisoners. Nogi’s army now joined Oyama’s forces and the battle of Mukden was fought, beginning Feb. 24 and continuing until March 12. This proved to be one of the greatest contests in history. Marshal Oyama had nearly 450,000 men and Kuropatkin about 410,000, the total number engaged being estimated at 860,000. The battle resulted in another victory for the Japanese, the Russian loss being nearly 110,000 men, in killed, wounded and prisoners. The loss of the Japanese was estimated at 75,000 men. No serious fighting on land occurred after this battle.

Meantime Russia sent a powerful fleet from the Baltic under the command of Rojestvenski. This fleet, sailing for Vladivostok, was attacked and destroyed in the Sea of Japan on May 27th, by the Japanese fleet under Togo. On the invitation of President Roosevelt of the United States, a peace conference was held at Portsmouth, N. H., opening on Aug. 9, 1905, and here a treaty of peace was signed on the 23rd of August, 1905. By this treaty Russia’s lease of Liaotung Peninsula, including Port Arthur, was assigned to Japan and Russia also ceded to Japan the southern half of the island of Sakhalin.

There are no works available for the Russo-Japanese War collection.