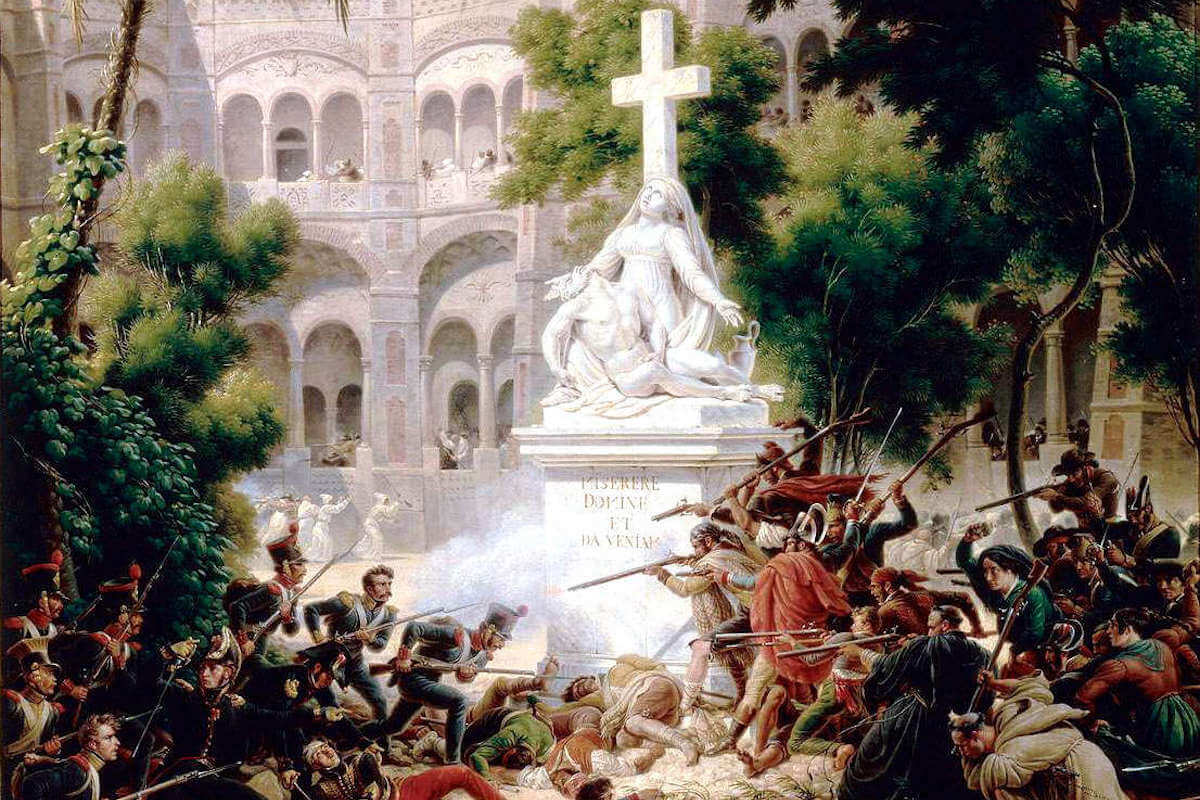 The Peninsular War[d] (1807–1814) was a military conflict fought by Bourbon Spain and Portugal, assisted by Great Britain, against the invading and occupying forces of the First French Empire for control of the Iberian Peninsula during the Napoleonic Wars.

The war began when the French and Spanish armies invaded and occupied Portugal in 1807, and escalated in 1808 after Napoleonic France took over Spain, previously its ally, and installed Joseph Bonaparte on the Spanish throne. The war on the peninsula lasted until the Sixth Coalition defeated Napoleon in 1814.

The Peninsular War overlaps with what the Spanish-speaking world calls the Guerra de la Independencia Española (Spanish War of Independence), which began with the Dos de Mayo Uprising on 2 May 1808 and ended on 17 April 1814. The French occupation destroyed the Spanish administration, which fragmented into quarrelling provincial juntas. The episode remains as the bloodiest event in Spain's modern history, doubling in relative terms the Spanish Civil War.

A reconstituted national government, the Cortes of Cádiz—in effect a government-in-exile—fortified itself in Cádiz in 1810, but could not raise effective armies because it was besieged by 70,000 French troops. British and Portuguese forces eventually secured Portugal, using it as a safe position from which to launch campaigns against the French army and provide whatever supplies they could get to the Spanish, while the Spanish armies and guerrillas tied down vast numbers of Napoleon's troops. These combined regular and irregular allied forces, by restricting French control of territory, prevented Napoleon's marshals from subduing the rebellious Spanish provinces, and the war continued through years of stalemate.

The British Army, under then Lt. Gen. Sir Arthur Wellesley, later the 1st Duke of Wellington, guarded Portugal and campaigned against the French in Spain alongside the reformed Portuguese army. The demoralised Portuguese army was reorganised and refitted under the command of Gen. William Beresford, who had been appointed commander-in-chief of the Portuguese forces by the exiled Portuguese royal family, and fought as part of the combined Anglo-Portuguese Army under Wellesley.

In 1812, when Napoleon set out with a massive army on what proved to be a disastrous French invasion of Russia, a combined allied army under Wellesley pushed into Spain, defeating the French at Salamanca and taking Madrid. In the following year Wellington scored a decisive victory over King Joseph Bonaparte's army in the Battle of Vitoria. Pursued by the armies of Britain, Spain and Portugal, Marshal Jean-de-Dieu Soult, no longer able to get sufficient support from a depleted France, led the exhausted and demoralized French forces in a fighting withdrawal across the Pyrenees during the winter of 1813–1814.

The years of fighting in Spain were a heavy burden on France's Grande Armée. While the French were victorious in battle, they were eventually defeated as their communications and supplies were severely tested and their units were frequently isolated, harassed or overwhelmed by partisans fighting an intense guerrilla war of raids and ambushes. The Spanish armies were repeatedly beaten and driven to the peripheries, but they would regroup and relentlessly hound and demoralize the French troops.

War and revolution against Napoleon's occupation led to the Spanish Constitution of 1812. The burden of war destroyed the social and economic fabric of Portugal and Spain, and ushered in an era of social turbulence, political instability and economic stagnation. Devastating civil wars between liberal and absolutist factions, led by officers trained in the Peninsular War, persisted in Iberia until 1850. The cumulative crises and disruptions of invasion, revolution and restoration led to the independence of most of Spain's American colonies and the independence of Brazil from Portugal.

There are no works available for the Penninsular War collection.