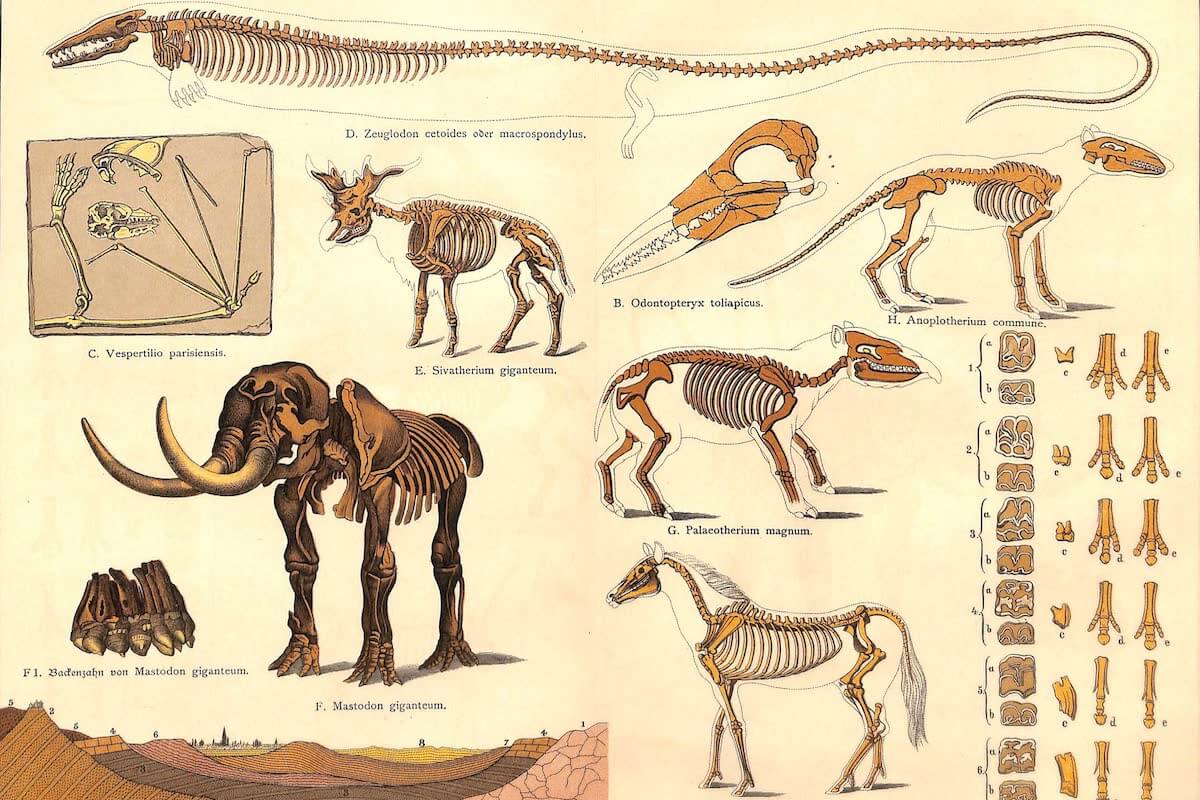 Fossils are the body, the bones, the shells or any part or distinct trace of any animal or plant buried in the earth by natural processes is a fossil. Fossils need not be of great age, and the youngest are of recent origin.

In some cases the bodies of the fossils, plants or animals are preserved. Trees buried by wind-drifted sand become fossils, though the wood is almost completely preserved. The bodies of mammoths have been found in the frozen earths of Siberia, the flesh still undecayed. They likewise are fossils. More commonly only the hard parts of animals, as the bones, teeth, shells etc., are preserved. In many cases even the substance has been replaced by mineral matter of a different sort.

Thus, the lime carbonate of shells may be replaced by iron pyrites or some other substance, and the form of the shell reproduced in the new substance is a fossil. The woody matter of buried trees is sometimes replaced by mineral matter, as silica, and the structure of the wood is reproduced in the mineral substance. Wood which has been thus transformed is petrified. In other cases buried shells are dissolved out of their setting, and there remains only a cavity (mold), having the shape of the shell, to indicate its former presence.

In still other cases the shell may be filled with sand or mud, and this filling may become hardened. The shell may then be dissolved, leaving the filling or cast. This also is a fossil. The tracks of animals made in sand or mud and preserved by burial or the impressions left by leaves buried in the sand or in mud are also fossils. For a long time these petrified remains of animals and plants were not understood.

During the middle ages the most curious ideas were held regarding them. The ones most commonly observed at that time were the shells of animals no longer existing, and they were asserted to be discarded molds of the Creator or abortive creative attempts into which the breath of life was not introduced. Lionardo da Vinci, in the early part of the 16th century, had understood their true nature, declaring them to be the remains of ancient life.

But this was forgotten, and it remained for Cuvier to announce it again at the clqse of the 18th century. Large bones were being exhumed at this time near Paris, and Cuvier, from his extensive knowledge of anatomy, showed that they belonged to animals no longer living. The fossils are of importance in telling the past history of life on the globe. If we gather those from the oldest rocks, we get an idea of the earlier forms, and the others in later-formed rocks, taken all together, show the succession of animal life in geological times.

Many of the fossil forms are entirely extinct. Other forms lived on, underwent modifications and developed into the animals of to-day. Within the past years the knowledge of fossil life has been greatly extended through explorations, and students of animal life are making out the lines of descent of our different modern animals. O. C. Marsh, E. D. Cope and other Americans made extensive and remarkable contributions to our knowledge of fossil life. Much attention is paid to the restoration and reconstruction of fossil forms.

The work in this direction that has been done at the American Museum of Natural History in New York city is noteworthy. Not only have reconstructions of lost parts been made, but picturesque restorations of the entire animals, by the artist, Mr. Knight, under the direction of Professor Osborn. The science of fossils is palaeontology.

There are no works available for the Paleontology collection.