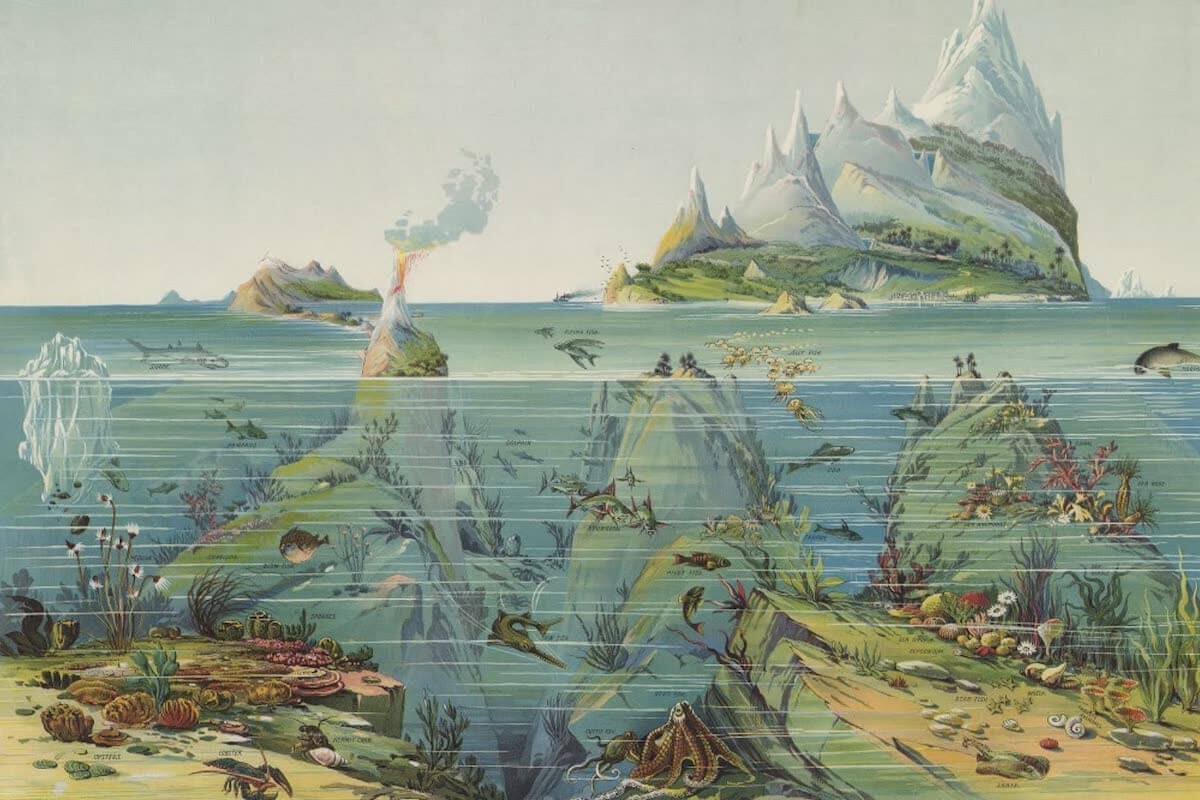 Oceanography is the science which deals with the ocean, and since the ocean forms a large part of the earth's surface oceanography is a large department of geography. The science is termed talassografia by the Italians, and attempts have been made without success to introduce the name “thalassography.” Of recent years the use of “hydrography” as the equivalent of physical oceanography has acquired a certain currency, but as the word is also used with more than one other meaning (see Surveying) it ought not to be used for oceanography.

Methods of Research.—When research in oceanography began, the conditions of the sea were of necessity observed only from the coast and from islands, the information derived from mariners as to the condition of parts of the sea far from land being for the most part mere anecdotes bearing on the marvellous or the frightful. In recent times, especially since the rapid increase in the study of the exact sciences during the 19th century, observations at sea with accurate instruments have become common, and the ships' logs of to-day are provided with headings for entering daily observations of the phenomena of the sea surface.

The contents of the sailors' scientific logs were brought together by the American enthusiast in the study of the sea, Matthew Fontaine Maury (1806-1873), whose methods and plans were discussed and adopted at international congresses held in Brussels in 1853 and in London in 1873. By 1904 more than 6800 of these meteorological logs with 7,000,000 observations had been accumulated by the Meteorological Office in London; 20,000 with 10,600,000 observations by the German Marine Observatory at Hamburg; 4700 with 3,300,000 observations by the Central Institute of the Netherlands at de Bilt near Utrecht.

The Hydrographic Office of the United States had collected 3800 meteorological logs with 3,200,000 entries before 1888; but since that time the logs have contained only one observation daily (at Greenwich noon) and of these 2,380,000 entries had been received by 1904. In the archives of the French Marine in Paris there were 3300 complete logs with 830,000 entries and 11,000 abstract logs from men-of-war. The contents of these logs, it is true, refer more to maritime meteorology than to oceanography properly so-called, as their main purpose is to promote a rational system of navigation especially for sailing ships, and they are supplied by the voluntary co-operation of the sailors themselves.

While the sailors' logs supply the greater part of the scientific evidence available for the study of the surface phenomena of the ocean, they have been supplemented by the records of numerous scientific expeditions and latterly by publications embodying systematic observations on a permanent basis. Valuable observations were made in oceanography during the expeditions of Captain James Cook and the polar explorers, especially those of Sir John Ross in the north and Sir James Ross in the south, but the voyage of H.M.S. “Challenger” in 1872-1876 formed an epoch marking the end of the older order of things and the beginning of modern oceanography as a science of precision.

The telegraph cable companies were quick to apply and to extend the oceanographical methods useful in cable-laying, and to their practical acuteness many of the most important improvements in apparatus are due. A second epoch comparable to that of the “Challenger” and resulting like it in a leap forward in the precision of the methods previously employed was marked by the institution in 1901 of the International Council for the Study of the Sea. This council was nominated by the governments of Norway, Sweden, Denmark, Finland, Russia, Germany, Great Britain, Holland and Belgium, with headquarters in Copenhagen and a central laboratory at Christiania, and its aim was to furnish data for the improvement of the fisheries of the North Sea and surrounding waters.

In the course of investigating this special problem great improvements were made in the methods of observing in the deep sea, and also in the representation and discussion of the data obtained, and a powerful stimulus was given to the study of oceanography in all the countries of Europe. The efforts of individual scientific workers cannot as a rule produce such results in oceanography as in other sciences, but exceptions are found in the very special services rendered by the prince of Monaco, who founded the Oceanographical Institute in Paris and the Oceanographical Museum in Monaco; and by Professor Alexander Agassiz in the investigation of the Pacific.

There are no works available for the Oceanography collection.