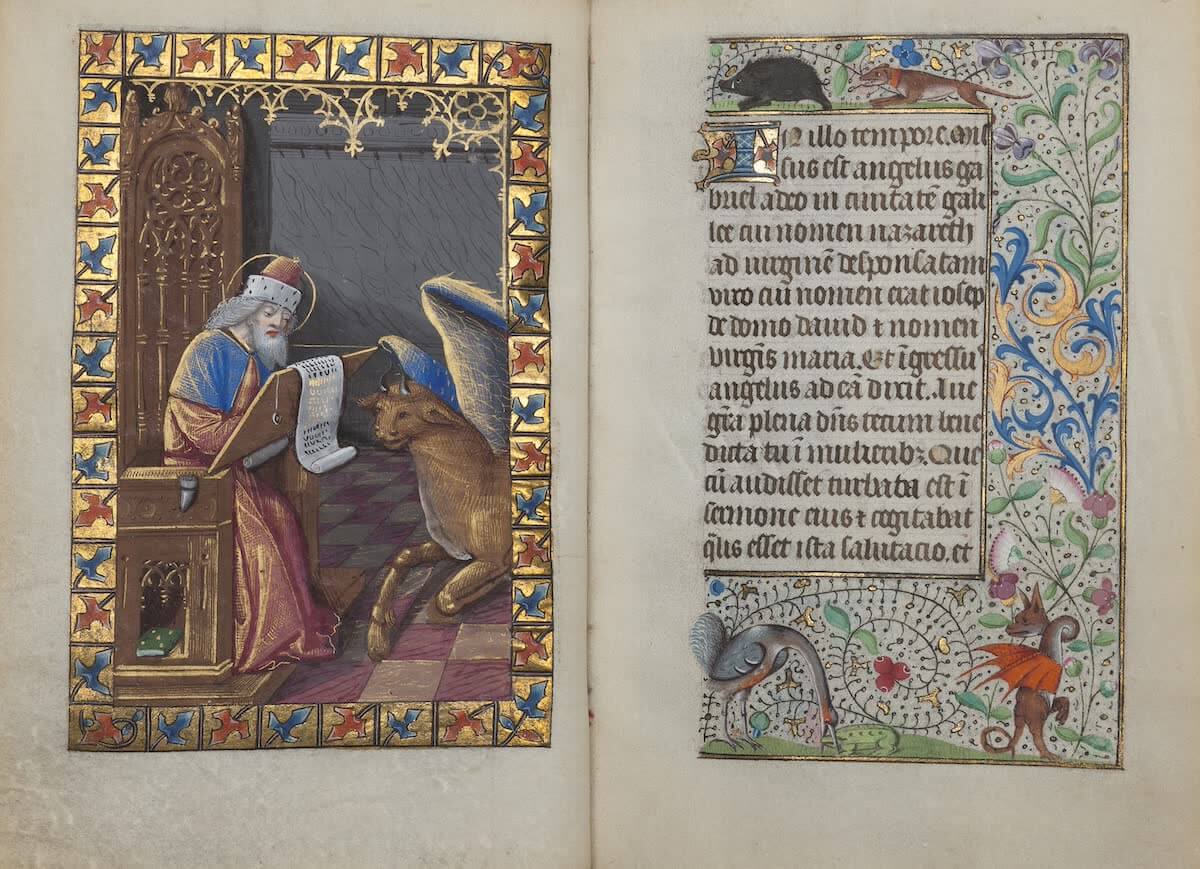 Every book written by hand on flexible material and intended to be placed in a library is called a manuscript. Manuscripts have been composed from the most remote antiquity (Egyptian papyri of the memphite epoch) down to the period of the invention of printing. However, Greek manuscripts were still copied until the end of the sixteenth century, and in the monasteries of the East (Mount Athos, Syria, Mesopotamia, etc.), the copying of manuscripts continued well into the nineteenth century. On the other hand the most recent Western manuscripts date from the last years of the fifteenth century.

Many manuscripts are illustrated with ornaments are called "eluminures", illuminations, or miniatures, a word used since the end of the sixteenth century. At first the "miniator" was charged with tracing in red minium the titles and initials. Despite its limitations, the art of illumination is one of the most charming ever invented featuring:

(1) Initials of chapters or paragraphs, ornamented sometimes very simply, sometimes on the other hand with a great profusion of interlacings, foliage, and flowers; these are developed along the whole length of the page and within are sometimes depicted persons or scenes from everyday life;

(2) Paintings on the margin, in which some scene is carried over several pages;

(3) Borders around the text (interlacing colonnades, etc.), the most remarkable example is that of the evangelistic canons of the Middle Ages; full-page paintings (or such as cover only a part of the page), but forming real pictures, similar to frescoes or easel pictures; these are chiefly found on very ancient or very recent manuscripts (fourteenth and fifteenth centuries);

The principal materials employed in the making of manuscripts have been papyrus, parchment, and paper. In exceptional cases other materials have been used (e.g. the linen books of Etruria and Rome, a specimen of which was found on an Egyptian mummy in the museum of Agram; the silken books of China, etc.). Besides, in ancient time and during the Middle Ages tablets dipped in wax on which characters were traced with a stylus were made us of for fugitive writings, accounts, etc.; these might be folding in two (diptychs), or in three (triptychs), etc. Papyrus (charta aegyptica) was obtained from a long-stemmed plant terminating in a large and elegant umbrella; this was the Cyperus Papyrus, which grew in the marshes of Egypt and Abyssinia. The stem was cut in long strips which were placed one beside the other. On the vertical strips others were placed horizontally; then after they had been wet with the water of the Nile they were submitted to strong pressure, dried in the sun, and rubbed with shells to render them solid.

To make a book the separate pages (selides, paginae) were first written on, then they were put end to end, the left margin of each page being made to adhere to the right margin of the preceding page. A roll (volumen) was thus secured, of which the dimensions were sometimes considerable. Some Egyptian rolls are forty-six feet long by nine or ten inches wide, and the great Harris papyrus (British Museum) is one hundred and forty-one feet long. The end of the last page was fastened to a cylinder of wood or bone (omphalos, umbilicus), which gave more consistency to the roll. The page having been ruled, the writing was done with a sharpened reed on the horizontal portion of the fibres.

From being almost exclusively used in Egypt, the use of papyrus spread to Greece about the fifth century, then to Rome and throughout the West. Its price remained very high; in 407 B.C. a roll of twenty leaves was worth twenty-six drachmas, or about five dollars (Corp. Insc. Attic., I, 324). Pliny the Elder (Hist. Nat., XIII, 11-13) gives a list of its various grades (charta Augusta, Liviana, etc.). Egypt retained the monopoly of the manufacture, which furthermore belonged to the State. Alexandria was the principal market. In the first centuries of the Middle Ages it was exported to the West by the "Syrians", but the conquest of Egypt by the Arabs (640) stopped the trade. However it still continued to be used for diplomas (at Ravenna until the tenth century; in the papal chancery until 1057). The Arabs had attempted to cultivate the plant in Sicily.

Parchment (charta pergamena), made of the skin of sheep, goats, calves (vellum), asses, etc., was used by the Ionians and the Asiatics as early as the sixth century B.C. (Herodotus, V, 58); the anecdote related by Pliny (Hist. Nat., XIII, 11), according to which it was invented at Pergamus, seems legendary; it would seem that its manufacture was simply perfected there. Imported to Rome in ancient times, parchment supplanted papyrus but slowly. It was only at the end of the third century A.D. that it was preferred to papyrus for the making of books. Once prepared, the parchment (membrana) was cut into leaves which were folded in two; four leaves together formed a book of eight folios (quaternio); all the books formed a codex. There was no paging before the fifteenth century; writers merely numbered first the books (signature), then the folios. The dimensions of the leaves varied; the most in use for literary texts was the large quarto.

An Urbino catalogue (fifteenth century) mentions a manuscript so large that it required three men to carry it (Reusens, "Paleographie", 457); and there is preserved at Stockholm a gigantic Bible written on ass-skin, the dimensions of which have won for it the name of "Gigas librorum". The page was ruled in dry point so deeply that the mark was visible on the other side. Parchments were written on both sides (opistographs). As parchment became very rare and costly during the Middle Ages, it became the custom in some monasteries to scratch or wash out the old text in order to replace it with new writing. These erased manuscripts are called palimpsests.

With the aid of reacting chemicals the old writing has been made to reappear and lost texts have been thus discovered (the Codex Vaticanus 5757 contains under a text of St. Augustine the "De Republica" of Cicero; recovered by Cardinal Mai). Manuscripts thus treated have been nearly always incomplete or mutilated; a complete work has never been recovered on a palimpsest. Finally, by sewing strips of parchment together, rolls (rotuli) were made similar to those formed of papyrus (e.g. Hebrew Pentateuch of Brussels, ninth century, on fifty-seven sewn skins, forty yards in length; "rolls of the dead", used by the associations of prayer for the dead in the abbeys; administrative and financial rolls used especially in England to transcribe the decrees of Parliament, etc.)

Paper is said to have been invented in China in A.D. 105 by a certain Tsai-Louen (Chavannes, "Jounr. Asiatique", 1905, 1). Specimens of paper of the fourth century A.D. have been found in Eastern Turkestan (expeditions of Stein and Sven Hedin). It was after the taking of Samarkand (704) that the Arabs learned to make paper, and introduced it to Bagdad (795), and to Damascus (charta damascena). It was known in Europe as early as the end of the eleventh century, and at this early date it was used in the Norman chancery of sicily; in the twelfth century it began to be used for manuscripts. It was sold even then in quires and reams (Arabic, razmah) and in the thirteenth century appeared the filigranes or watermarks.

According to chemical analyses, the paper of the Middle Ages was made of hempen or linen rags. The expression "charta Bombycina" comes from the Arab manufactory of Bombyce, between Antioch and Aleppo. The copyist of the Middle Ages used chiefly black ink, incaustum, composed of a mixture of gall nuts and vitrol. Red ink was reserved from ancients times for titles. Gold and silver ink were used for manuscripts de luxe (see EVANGELIARIA). The method of binding codices has varied little since ancient times. The books were sewn on ox sinews placed in rows of five or six on the back. These sinews (chordae) served to attach to the volume wooden covers, which were covered with parchment or dyed skin. Covers of the manuscripts de luxe were made of ivory or brass, ornamented with carvings, precious stones, cut and uncut.