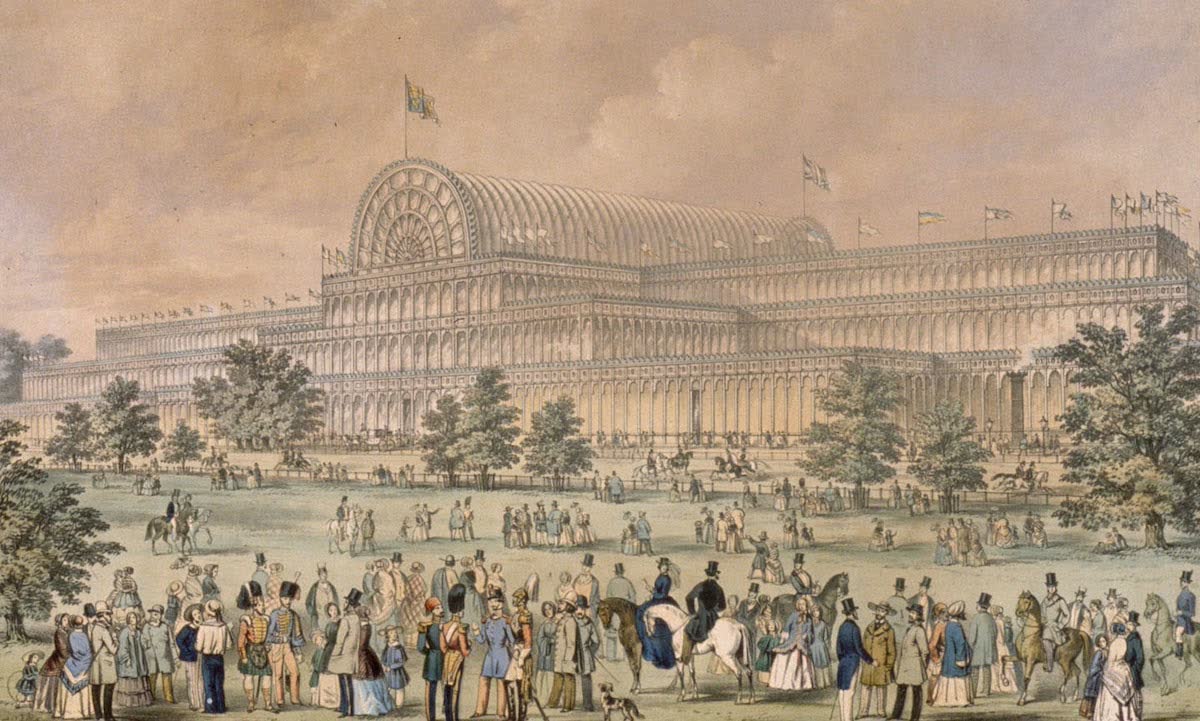 The Great Exhibition of the Works of Industry of All Nations or The Great Exhibition (sometimes referred to as the Crystal Palace Exhibition in reference to the temporary structure in which it was held), an international exhibition, took place in Hyde Park, London, from 1 May to 15 October 1851. It was the first in a series of World's Fairs, exhibitions of culture and industry that became popular in the 19th century.

The Great Exhibition of the Works of Industry of All Nations was organised by Prince Albert, Henry Cole, Francis Henry, George Wallis, Charles Dilke and other members of the Royal Society for the Encouragement of Arts, Manufactures and Commerce as a celebration of modern industrial technology and design. It was arguably a response to the highly effective French Industrial Exposition of 1844: indeed, its prime motive was for Britain to make "clear to the world its role as industrial leader".

Prince Albert, Queen Victoria's consort, was an enthusiastic promoter of the self-financing exhibition; the government was persuaded to form the Royal Commission for the Exhibition of 1851 to establish the viability of hosting such an exhibition. Queen Victoria and her family visited three times. Although the Great Exhibition was a platform on which countries from around the world could display their achievements, Britain sought to prove its own superiority.

The British exhibits at the Great Exhibition "held the lead in almost every field where strength, durability, utility and quality were concerned, whether in iron and steel, machinery or textiles." Britain also sought to provide the world with the hope of a better future. Europe had just struggled through "two difficult decades of political and social upheaval," and now Britain hoped to show that technology, particularly its own, was the key to a better future.

Six million people—equivalent to a third of the entire population of Britain at the time—visited the Great Exhibition. The average daily attendance was 42,831 with a peak attendance of 109,915 on 7 October. The event made a surplus of £186,000 (£18,370,000 in 2015),, which was used to found the Victoria and Albert Museum, the Science Museum and the Natural History Museum. They were all built in the area to the south of the exhibition, nicknamed Albertopolis, alongside the Imperial Institute. The remaining surplus was used to set up an educational trust to provide grants and scholarships for industrial research; it continues to do so today.

The Crystal Palace was a well-known English resort, standing high up in grounds just outside the southern boundary of the county of London, in the neighbourhood of Sydenham. The building, chiefly of iron and glass, is flanked by two towers and is visible high over the metropolis. It measures 1608 ft. in length by 384 ft. across the transcripts, and was opened in its present site in 1854.

The materials, however, were mainly those of the hall set up in Hyde Park for the Great Exhibition of 1851. The designer was Sir Joseph Paxton. In the palace there are various permanent exhibitions, while special exhibitions are held from time to time, also concerts, winter pantomimes and other entertainments. In the extensive grounds there is accommodation for all kinds of games; the final tie of the Association Football Cup and other important football matches are played here, and there are also displays of fireworks and other attractions.

The Crystal Palace was designed by Joseph Paxton with support from structural engineer Charles Fox, the committee overseeing its construction including Isambard Kingdom Brunel, and went from its organisation to the grand opening in just nine months. The building was architecturally adventurous, drawing on Paxton's experience designing greenhouses for the sixth Duke of Devonshire.

It took the form of a massive glass house, 1848 feet long by 454 feet wide (about 563 metres by 138 metres) and was constructed from cast iron-frame components and glass made almost exclusively in Birmingham and Smethwick. From the interior, the building's large size was emphasized with trees and statues; this served, not only to add beauty to the spectacle, but also to demonstrate man's triumph over nature.

The Crystal Palace was an enormous success, considered an architectural marvel, but also an engineering triumph that showed the importance of the Exhibition itself. The building was later moved and re-erected in 1854 in enlarged form at Sydenham Hill in south London, an area that was renamed Crystal Palace. It was destroyed by fire on 30 November 1936.