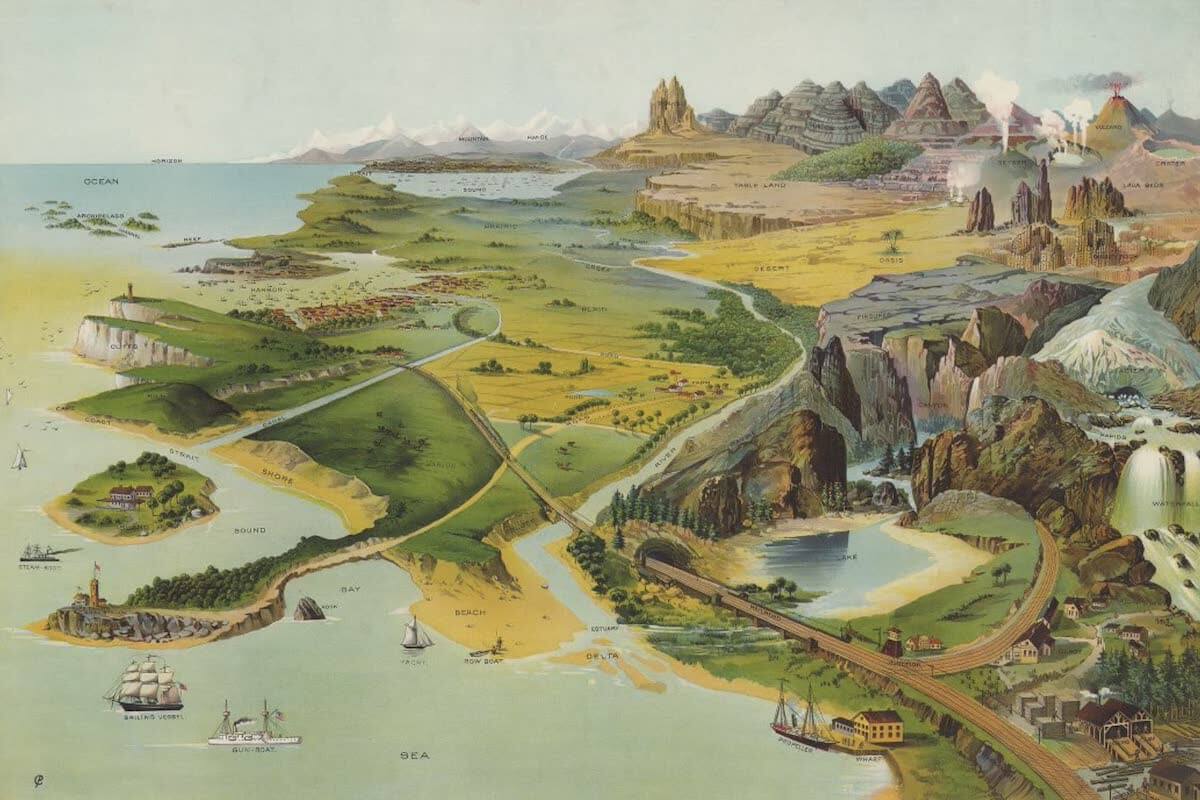 Geography means strictly a description of the earth. As now used, it is that branch of science which treats of the features of the earth's surface, the division into countries and the plants and animals, including man, which cover it.

It may be divided into physical geography, dealing with the form and motions of the earth, the atmosphere or air-covering, the land-surface and the water-covering, the facts that make up climate, the great classes of rocks that make up the surface and the leading classes of plants and animals which cover it; and political geography, giving an account of the different states or communities into which man is divided.

The terms commercial geography, which discusses the products and commerce of the different parts of the world; medical geography, dealing with different places as liable to certain diseases; and oceanography, which investigates the ocean and its inhabitants, are also sometimes used. Thus the study of geography touches in various ways upon many other sciences, as geology, history and astronomy.

The progress of geographical knowledge has depended largely on the progress of discovery. The Phoenicians were the first people who communicated to other nations a knowledge of distant lands. Their voyages before the time of Homer, through the Euxine, the Mediterranean and even into the Atlantic form the first link of the great chain of discovery which, centuries later, was extended by Columbus to the shores of America. Travelers like the Greek historian, Herodotus, whose History gives a complete representation of what was known of the earth's surface in his age, did much for the advancement of geography, as did also the exploring and surveying expeditions of Alexander the Great.

At the same time Pytheas, the Massilian navigator, was following the path of discovery in the north, possibly as far as Iceland, and in 276 B.C. Eratosthenes first used parallels of longitude and latitude and made maps on mathematical principles. By this time the old idea of the earth as a flat, circular shield surrounded by a rim of water had given place to the belief that the earth is a sphere, revolving with the surrounding atmosphere on one and the same axis. The practical genius of the Romans led them to make a study of the resources of the countries they conquered, which did much for geography. Their greatest work was a survey of the whole empire, including a description and measurement of each province, which was made under Caesar and Augustus. In the second century of our era Ptolemy wrote a work on geography, in eight books, which for many centuries was regarded as the most perfect system of the science.

The travels of the Venetian, Marco Polo, in the i4th century opened new fields of inquiry, and the close of the next century was marked by the discovery of the American continent. Within thirty years the whole coast of America, from Greenland to Cape Horn, had been explored; the Pacific Ocean had been navigated by Magellan and the world circumnavigated by his ship; the coasts of eastern Africa, Arabia, Persia and India had been visited; and numerous islands in the Indian Ocean discovered. The attempts to find a northwest passage to India increased the knowledge of the Arctic regions. Captain Cook by his long voyages dispelled the old belief in the existence of a great Antarctic continent, and the Antarctic lands have been visited during the 19th and 20th centuries.

In the 17th century the Dutch made the Australian islands (which the Portuguese had discovered about 1500 or else in 1601) known to the world, but it was not until within a few years that the first successful voyage was made through the northeast passage around Europe and Asia and through the northwest one around America. In America the travels of Humboldt, Lewis and Clarke, Fremont and others and the work of the United States and Canadian surveys have done much to add to our scientific knowledge. Africa, Asia and Australia are pretty well-known, but are still lands of exploration, though great areas in each have been opened in recent years, Commander Peary. U. S. N., who on April 6, 1909, reached the long sought North Pole; and Nansen; and Sven Hedin in Tibet in 1906-8 are but a few of the many who have enormously extended geographical knowledge recently. The work of making geography is still going on, and is constantly becoming more complete and important. Among the most valuable efforts in this direction may be mentioned the deep-sea exploring expeditions.