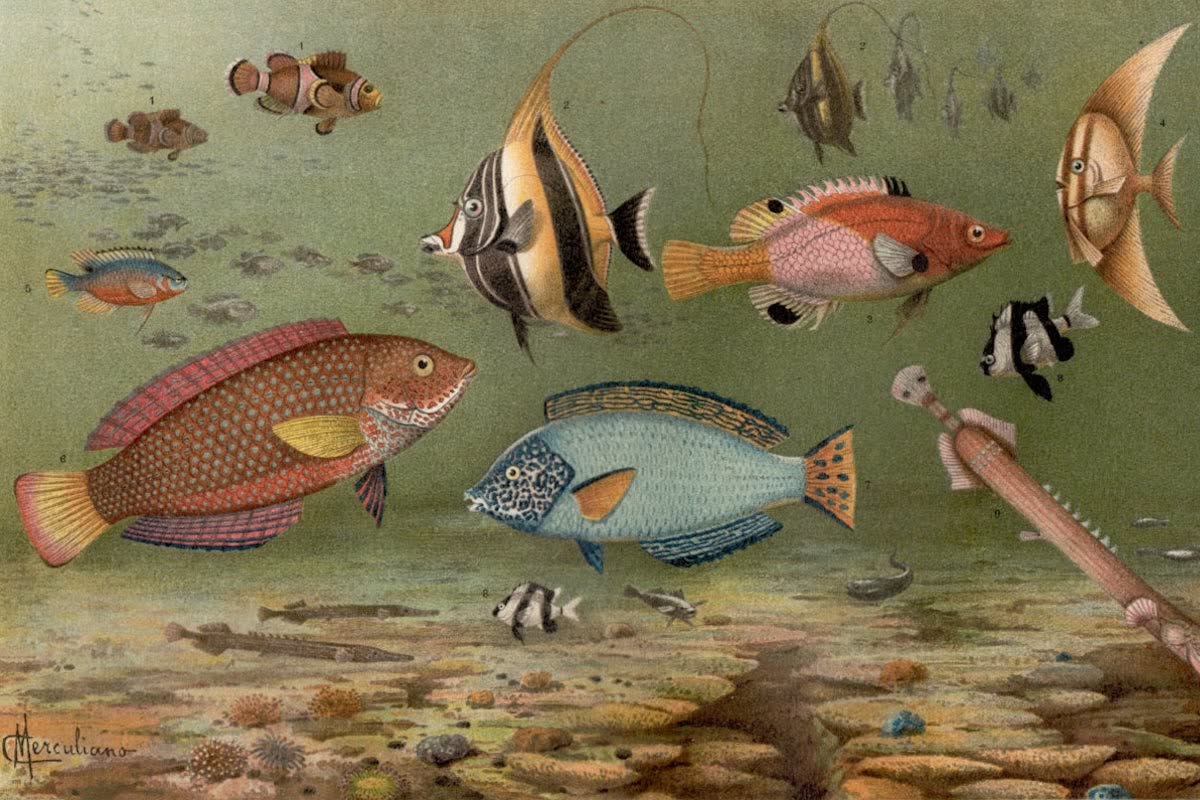 Fishes, aquatic vertebrates, breathing by gills. They are very numerous, and are of interest to the sportsman as game, to people in general as food and to the scientific student.

Fishes make a natural group or class. They have a two-chambered heart, consisting of an auricle and ventricle. They have gills and blood vessels running in the gill-arches that are called aortic arches—usually four or five in number. These run around the pharynx and unite above into the aorta or great artery. The blood is sent out from the heart to the gills; there it takes in oxygen and continues its circulation as arterial blood; and, passing through the capillaries of the body, it returns to the heart as venous blood.

Fish have fins, supported by fin-rays, for swimming. Their colors vary, and often are brighter during the spawning season. Their food is diverse, many of them eating smaller fishes, crustacea and worms, while others feed upon plants; some few swallow mud for the sake of the organic matter contained in it. Their eggs are usually laid in immense numbers; for example, the whitefish or trout lays about 50,000 eggs in one season.

If any common fish be examined, there will be seen a line running on each side about the middle of the body. This is the position of the lateral line. These organs exist also in the tadpole stages of frogs and toads, but disappear when the animals leave the water, and are not present in land animals. Deep-sea explorations have brought to light many strange and curious fishes, some of them having luminous spots, from which light is emitted.

Excluding the lancet and the Cyclostomata as below the true fishes, there are four orders left.

1. Bony or modern fishes (Teleostei). This is far the largest group, including most of the food and game fishes both in fresh and salt water, as cod, bass, perch, pike, trout, mackerel, etc.

2. Ganoid or ancient armored fishes (Ganoidei), including fishes with shiny hard scales, like the garpike, sturgeon, bowfin, etc. Representatives of this order are found as fossils in very ancient rocks, while the first order occurs as fossils only in relatively modern rocks.

3. Mudfishes, or double breathers (Dipnoi), including fishes that possess both gills and lungs, being the lowest vertebrates to have lungs. These first lungs are formed from the air-bladder, which is interesting, as it gives us a clue to the origin of lungs. These fishes live in the waters of Africa and Australia that dry up, and they form for themselves mud cases in which they live till the water returns again. The heart is imperfectly three-chambered, and by this and the possession of lungs they are closely allied to the Amphibia.

4. Cartilaginous fishes (Elasmobranchii), fishes with a cartilaginous skeleton and brain-case, instead of a bony one, including sharks, rays, skates, torpedoes, etc.

See Blindfish, Carp, Cod, Goldfish and others in alphabetical order. See Goode's American Fishes; Baskett's The Story of the Fishes; and Jordon's Fishes (1907)