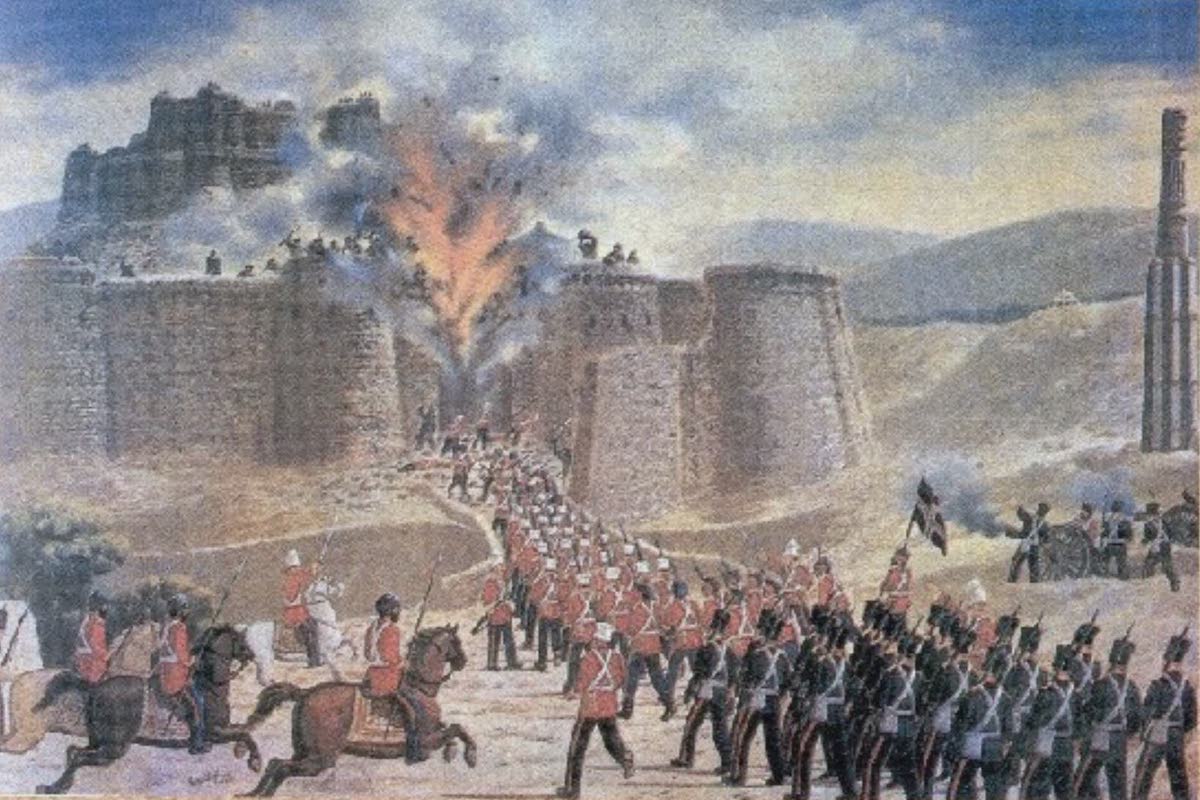 The First Anglo-Afghan War, 1838–42.—In 1809, in consequence of the intrigues of Napoleon in Persia, the Hon. Mountstuart Elphinstone had been sent as envoy to Shah Shuja, then in power, and had been well received by him at Peshawar. This was the first time the Afghans made any acquaintance with Englishmen. Lieut. Alex. Burnes (afterwards Sir Alex. Burnes) visited Kabul on his way to Bokhara in 1832.

In 1837 the Persian siege of Herat and the proceedings of Russia created uneasiness, and Burnes was sent by the governor-general as resident to the amir's court at Kabul. But the terms which the Dost sought were not conceded by the government, and the rash resolution was taken of re-establishing Shah Shuja, long a refugee in British territory. Ranjit Singh, king of the Punjab, bound himself to co-operate, but eventually declined to let the expedition cross his territories.

The war began in March 1838, when the "Army of the Indus," amounting to 21,000 men, assembled in Upper Sind and advanced through the Bolan Pass under the command of Sir John Keane. There was hardship, but scarcely any opposition. Kohandil Khan of Kandahar fled to Persia. That city was occupied in April 1839, and Shah Shuja was crowned in his grandfather's mosque. Ghazni was reached 21st July; a gate of the city was blown open by the engineers (the match was fired by Lieut., afterwards Sir Henry, Durand), and the place was taken by storm. Dost Mahommed, finding his troops deserting, passed the Hindu Kush, and Shah Shuja entered the capital (August 7). The war was thought at an end, and Sir John Keane (made a peer) returned to India with a considerable part of the force, leaving behind 8000 men, besides the Shah's force, with Sir W. Macnaghten as envoy, and Sir A. Burnes as his colleague.

During the two following years Shah Shuja and his allies remained in possession of Kabul and Kandahar. The British outposts extended to Saighan, in the Oxus basin, and to Mullah Khan, in the plain of Seistan. Dost Mahommed surrendered (November 3, 1840) and was sent to India, where he was honourably treated. From the beginning, insurrection against the new government had been rife. The political authorities were overconndent, and neglected warnings. On the 2nd of November 1841 the revolt broke out violently at Kabul, with the massacre of Burnes and other officers.

The position of the British camp, its communications with the citadel and the location of the stores were the worst possible; and the general (Elphinstone) was shattered in constitution. Disaster after disaster occurred, not without misconduct. At a conference (December 23) with the Dost's son, Akbar Khan, who had taken the lead of the Afghans, Sir W. Macnaghten was murdered by that chief's own hand. On the 6th of January 1842, after a convention to evacuate the country had been signed, the British garrison, still numbering 4500 soldiers (of whom 690 were Europeans), with some 12,000 followers, marched out of the camp. The winter was severe, the troops demoralised, the march a mass of confusion and massacre, and the force was finally overwhelmed in the Jagdalak pass between Kabul and Jalalabad.

On the 13th the last survivors mustered at Gandamak only twenty muskets. Of those who left Kabul, only Dr Brydon reached jalalabad, wounded and half dead. Ninety-five prisoners were afterwards recovered. The garrison of Ghazni had already been forced to surrender (December 10). But General Nott held Kandahar with a stern hand, and General Sale, who had reached Jalalabad from Kabul at the beginning of the outbreak, maintained that important point gallantly.

To avenge these disasters and recover the prisoners preparations were made in India on a fitting scale; but it was the 16th of April 1842 before General Pollock could relieve Jalalabad, after forcing the Khyber Pass. After a long halt there he advanced (August 20), and gaining rapid successes, occupied Kabul (September 15), where Nott, after retaking and dismantling Ghazni, joined him two days later. The prisoners were happily recovered from Bamian. The citadel and central bazaar of Kabul were destroyed, and the army finally evacuated Afghanistan, December 1842.

This ill-planned and hazardous enterprise was fraught with the elements of inevitable failure. A ruler imposed upon a free people by foreign arms is always unpopular; he is unable to stand alone; and his foreign auxiliaries soon find themselves obliged to choose between remaining to uphold his power, or retiring with the probability that it will fall after their departure. The leading chiefs of Afghanistan perceived that the maintenance of Shah Shuja's rule by British troops would soon be fatal to their own power and position in the country, and probably to their national independence.

They were insatiable in their demands for office and emolument, and when they discovered that the shah, acting by the advice of the British envoy, was levying from among their tribesmen regiments to be directly under his control, they took care that the plan should fail. Without a regular revenue no effective administration could be organized; but the attempt to raise taxes showed that it might raise the people, so that for both men and money the shah's government was still obliged to rely principally upon British aid. All these circumstances combined to render the new régime weak and unpopular, since there was no force at the ruler's command except foreign troops to put down disorder or to protect those who submitted, while the discontented nobles fomented disaffection and the inbred hatred of strangers in race and religion among the general Afghan population.

There are no works available for the First Anglo-Afghan War collection.