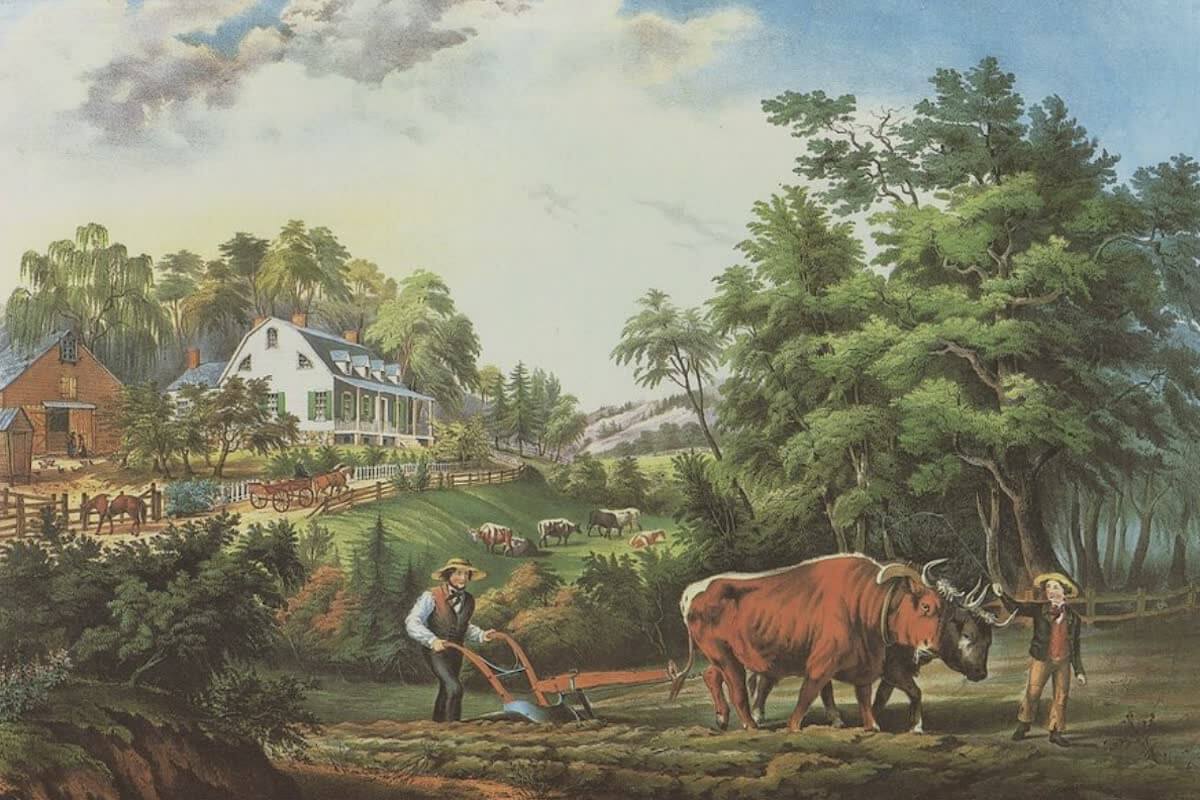 Agriculture or farming comprehends the tillage of the soil, the cultivation and harvesting of crops, the rearing, breeding, feeding and management of the various domesticated animals, and the manufacture of numerous products of the farm into commodities suitable for home use or for commercial purposes. No other of the arts antedates this, which not only feeds and clothes the world but contributes in ways innumerable to its wealth and welfare.

Wherever husbandry has been in highest esteem there has been found a people advanced in civilization. Apart from the present-day advantages of knowledge that centuries of research and investigation have given, and those contributed by agricultural chemistry, new and improved machinery and modern transportation facilities, the husbandmen of some of the nations of antiquity were in many essentials so advanced as to make comparison of their practices with those of to-day appear by no means discreditable.

The ancient Egyptians, we are informed, knew the wisdom of crop rotation, were skilled in their methods of suiting these to soils and seasons, and even the rearing of poultry hatched by artificial incubation was not uncommon. The exceeding care in their execution of deeds of conveyance, minute description of both the seller and realty and exactness of terms warrant the belief that land was held in earliest times at high value as a means of producing wealth. Farming operations were overseen by superintendents, shelter provided for beasts and vehicles, and records kept of accounts. The Scriptures abound in allusions to flocks and herds and the produce of the field.

Palestine afforded an early example of intensive farming, where small holdings were the rule. The limited farms, it is recorded, produced abundantly, and their fertility was maintained by judicious cultivation and management. A mixed husbandry obtained, and the fields were enriched by the application of manures. Ancient Romans were among the foremost of their time in agricultural pursuits, and problems of irrigation, tillage and fertilization were among those which commanded their attention. Cato, Pliny and others expounded doctrines that in the present century are being promulgated by our most learned teachers. They recommend rotation, such, for instance, as having wheat follow legumes, because, as Pliny said, they enriched the ground; also the keeping and feeding of live stock was advocated. To-day it is quite generally recognized that any rational system of farming includes these usages.

During the Middle Ages agriculture in Europe under barbarian conquerors was neglected, and those engaged in it held in contempt; its peaceful pursuits were largely abandoned by the landowners for war and the chase, and every one not of the nobility was regarded as a slave, subject to the will of a master. This resulted in a most deplorable condition of labor, and retarded progress; but the end of the feudal system marked the beginning of a new era, and renewed attention was given to tillage. By the end of the seventeenth century it was probably as skilfully practiced as ever before, and the prestige of the husbandmen had been regained.

The eighteenth century was one notable in its relation to the world's agriculture. Jethro Tull, an Englishman, introduced the method advocated by him of sowing crops in drill rows, which admitted of their cultivation, and a four-crop rotation that has been followed more or less strictly to the present time is credited to Lord Townshend. Robert Bakewell, another Englishman, revealed the methods by which all breeds of farm live stock have since been improved, i.e., by judicious selection, mating and feeding, as illustrated in the Leicester sheep which he developed, and in the cattle known as Longhorns which he improved. By the same methods the brothers Colling produced from the native Teeswater cattle the famous breed now known as the Shorthorn, and Herefords were similarly improved or developed by Benjamin Tomkins. These were the pioneers in this work, Thomas Bates, Thomas Booth and others became famous as improvers of Shorthorns, as did Amos Cruickshank, a Scotchman, later, and through the latter's breeding came some of the greatest Shorthorns of the last quarter of a century.

In the light of present-day knowledge and practices agriculture differs much in our own from that of earlier times. Chemistry, invention of new tools and machinery and improvement of the old, better methods of tillage, and superior educational facilities raising the general plane of intelligence are among the more potent forces that have effected the change. The most far-reaching developments have been accomplished during the past century, and from the multitude of scientists and investigators now delving into the mysteries of the soil and of animal and plant life, much more of value is likely to be evolved. Agricultural implements and machinery were developed and perfected to their present efficiency only in recent times, and there is nothing to suggest that the end in their improvement is near; the rapid extension of railroads and improved methods of travel and transportation are the work of the past few years, and the institutions on every hand for agricultural education are also the products of modern times.