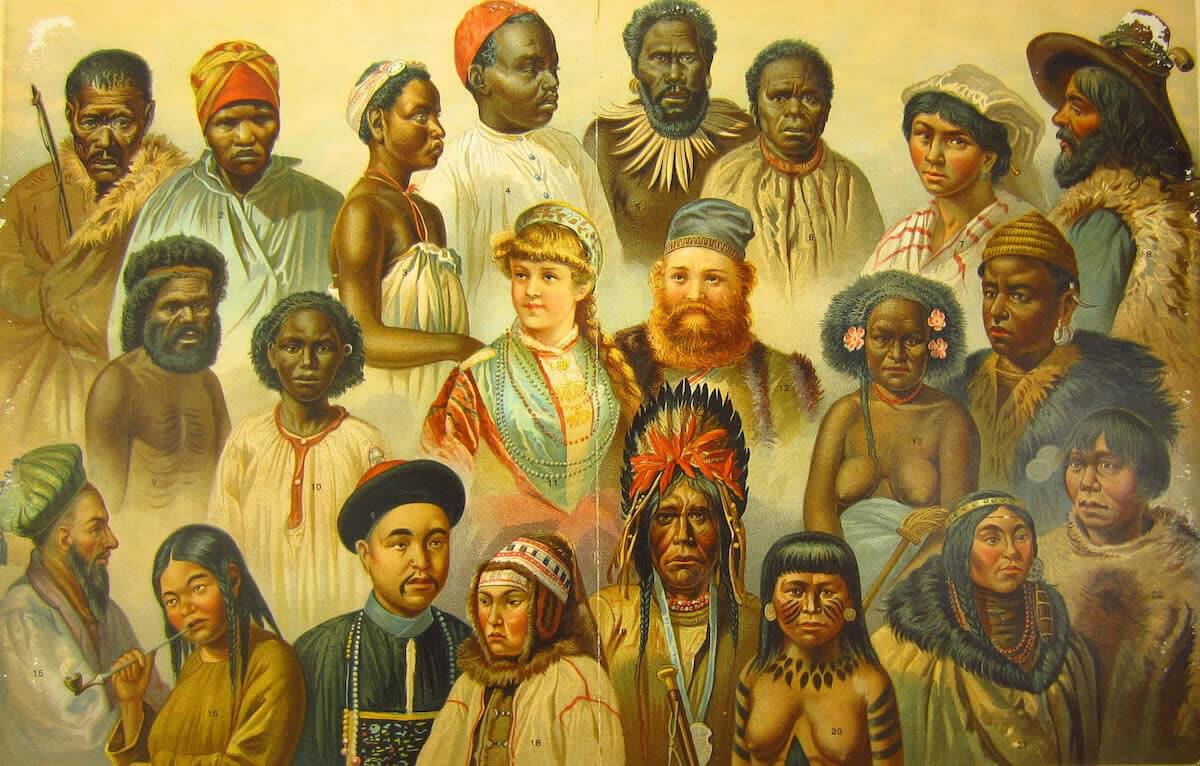 Anthropology is subdivided into several branches, each of which treats of some special phase of man's natural history. There is a difference in the meaning given by students to the names employed to designate the divisions of the study of man. Ethnology, ethnography, and anthropology have been to some extent interchangeable terms. Each of these branches of knowledge has a special meaning given it in different countries. However, there is becoming a more general acceptance of a definite meaning for these topics.

The comprehensive term anthropology is recognized in its general sense to include all others (Keane, Tylor, Mason). The meaning herein given to Ethnology is widely recognized (Keene, Brinton). The use of the term anthropology, to designate societies for the study of man and for sections in national scientific bodies on both sides of the Atlantic, indicates a general tendency to accept the proper meaning of the word.

Ethnology differs from ethnography, which deals chiefly with the collection of facts regarding the families, tribes and races of mankind, in seeking to explain the significance of the information obtained. Ethnography (from a people, to write) is a writing about, a description of, peoples. Ethnology (from , a people, a discourse), attempts to interpret the facts gathered, to explain the causes for the conditions and the relationships of different peoples. Ethnography and ethnology occupy a relation to each other somewhat akin to that of geography and geology. One deals chiefly with existing facts, the other attempts to interpret the history which brought them forth.

The unity of the race is now generally accepted. From the researches of the physiologist, the anatomist, the philologist and the psychologist we obtain the same testimony as to the specific unity of our race. The place of origin or centre of dispersal is not fixed. From the studies of eminent specialists, it would seem that the land about the shores of the Mediterranean, or the region farther eastward toward India, may claim to be the home of primitive man. About the Mediterranean they settled down like frogs about a pond (Plato).

Classification. - For classification, mankind is divided into groups. On account of their distribution, these are sometimes named for geographical divisions. They are also distinguished as families, clans, tribes, nations, peoples and races. In the naming of the latter, family relationships form a prominent factor. It is with both of these lines of classification and the distribution of those discussed under them that ethnology has to do. In these efforts at classification, different schemes have been tried. It is generally accepted that there are two groups of elements of characterization, which are sometimes called criteria. These are physical elements and psychical elements.

The principal physical elements are the bones, the shape of the skull, the facial angle, the color of the skin, color, shape and texture of the hair. Of these, color, probably because the most conspicuous feature, was the first to be considered and formed the basis of all the early classifications. The craniological school founded by the elder Retzius (1796-1860), made the shape of the head the basis of classification, and introduced exact methods into this branch of the subject. This was based on the relative length and breadth of the skull, and accordingly mankind was divided into long-skulled and short, broad-skulled races. Later developments in craniology introduced a third class, representing a mean between the other two. Craniology alone cannot be depended upon to supply sufficient or trustworthy materials for the proper classification of mankind. Nevertheless it has thrown much light upon the subject. Of late years the color, shape and texture of the hair have steadily risen in the estimation of naturalists as a racial test. The hair is now regarded as the most constant of all the physical features and has been made the foundation of their groupings by some of the most eminent anthropologists.

The other physical ethnical elements are of little value separately, but are often useful aids in combination with others. Such are stature; the shape, color and position of the eye; the size and form of the brain; the shape of the nose and mouth; the superciliary and zygomatic arches, and all such other elements as collectively constitute the broad, flat features of the lower, the oval and regular faces of the higher races.

The psychical elements are less conspicuous, and have but recently been taken into account in classification. It has been said that "Love and hunger rule the world." The former relates to the perpetuation of kind, the latter to self-preservation. Around these two may be grouped the other factors of this class. The following are the principal psychical elements:

Food, clothing and shelter are the imperative needs of the human species at all ages and under all conditions. Among the prominent topics considered under the sexual impulse are the position of woman, the marriage relation and the line of descent. Language is the chief of the psychical elements. Some perhaps, with Horatio Hale, would make it the sole test of race. The power of religion, both as a constructive and dispersive force, is the repeated testimony of history. The organization and administration of government, whether in its primitive form or in the more enlightened stage, is of deepest interest. The arts of life find their origin in the rude homes of early man, and have steadily been influential in all human progress. For these have lives been lost, tribes been destroyed, nations been formed, battles been won. They have been the motive power in every effort, the impulse behind every forward movement of mankind from the earliest days to now.