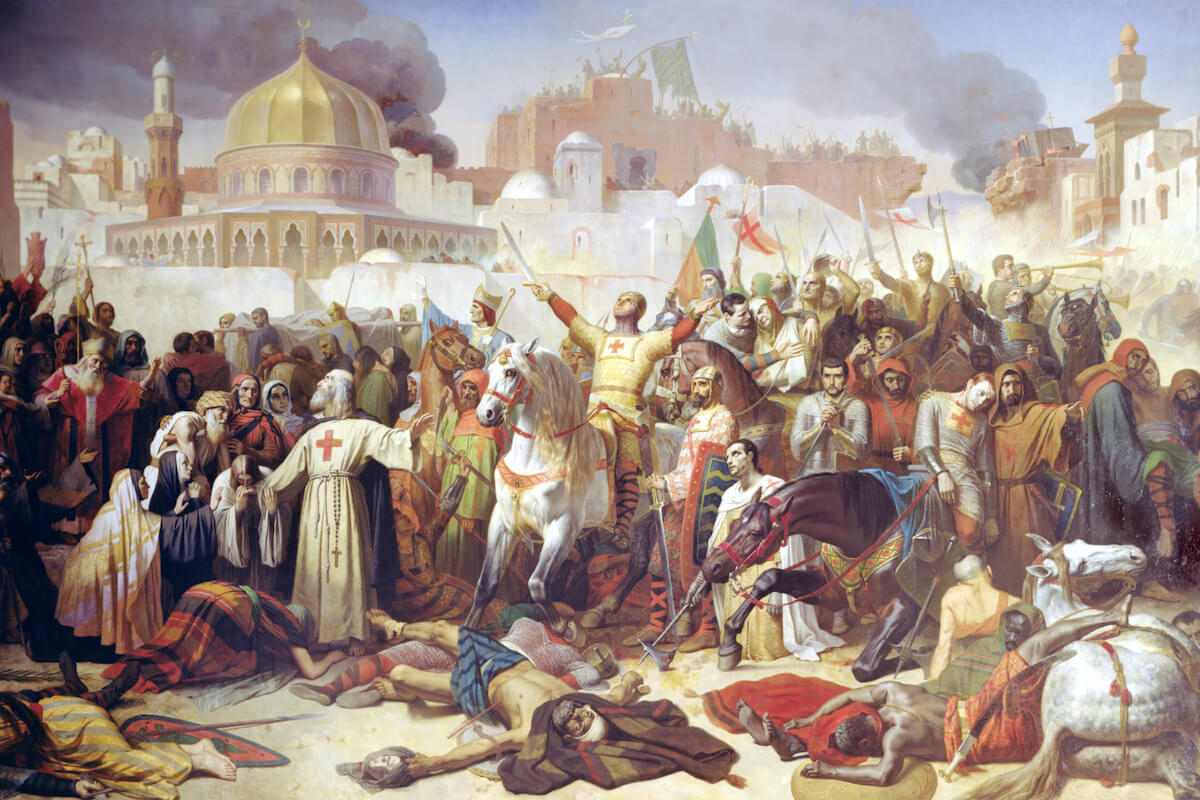 Crusades, The (from Portuguese cru-zado, "marked with the cross"), is the name given to the religious wars carried on during the middle ages between the Christian nations of western Europe and the Mohammedans. The first of the crusades was undertaken (1096-9) to uphold the right of pilgrims to visit the Holy Sepulcher at Jerusalem. The Arabs had generously allowed the pilgrims, who came in thousands, not only to visit the sepulcher but to build a church and hospital in the city. In 1065 the Seljuk Turks conquered the country. At once the pilgrims were molested and treated with cruelty.

Peter the Hermit, a Frenchman, who had himself made a pilgrimage and had witnessed the cruelties of the Turks, with the pope's sanction (1095) wandered over Europe, preaching everywhere to crowds in the open air, telling how Christians were beaten, robbed and murdered. Europe was roused from end to end. At a council, held at Clermont, France, to consider the matter, the pope's speech was interrupted by cries of " God wills it! " This became the war-cry of the enterprise; the badge worn was the cross, from which came the name crusade.

The following, in brief, comprises the annals of the various crusades: First, four rabble hordes went forth, viz., 20,000 under Walter the Penniless, followed by 40,000 under Peter the Hermit, who were badly cut to pieces in Bulgaria and the survivors utterly overthrown by the Turks at Nicaea; then issued 15,000 Germans who were scattered and slaughtered in Hungary, which also proved the grave of 200,000 poor wretches from England, France, Flanders and Lorraine. But soon came six armies of real crusaders under Godfrey of Bouillon, Robert, Duke of Normandy and others, accompanied by Tancred, the hero of the crusade; in all some 600,000.

The sultan's capital, Nicsea, fell in 1097. Next Edessa, and then An-tioch after a fearful siege of seven months, the Christian army melting away from famine, sickness and desertion. Two hundred thousand Seljuks now besieged the westerners. When they were routed, only 400,000 men were left to march on Jerusalem. The city fell; Godfrey of Bouillon was chosen king; soon all Palestine came into his hands; and for 50 years the crusaders held the principalities of Edessa, Antioch and Jerusalem. At Jerusalem were founded the two famous orders of the Knights Hospitalers of St. John and the Knights Templars.

In 1144 Edessa was conquered and the Christians slaughtered. A second crusade, preached by the famous St. Bernard, was led in 1147 by Conrad III of Germany and Louis VII of France. About 1,200,000 soldiers marched under them, only to be defeated, Conrad's army, by the treachery of the Greek emperor, near Iconium, and Louis' army in the Pisidian Mountains.

The deathblow to the kingdom of Jerusalem came from a young Kurdish chief, who had made himself sultan of Egypt and sought to become sovereign of all the Moslems—the famous Saladin. His conquest of Jerusalem (1187) gave rise to the third crusade, led by Philippe Auguste, king of France and Richard the Lion-heart, king of England. Acre was attacked (1190), and 23 months later it surrendered.

But the leaders quarreled, Philippe went back to France, and Richard, after performing prodigies of valor, which excited the admiration of the Saracens, made a treaty with Saladin (1192), by which the people of the west were to be at liberty to make pilgrimages to Jerusalem without being taxed. The fourth crusade (1203) never went near Palestine, but founded the Latin Empire of Constantinople, which lasted 56 years.

One of the strangest happenings in history is the children's crusade, which took place in 1212. An army of French children, 30,000 strong, headed by a peasant-boy named Stephen, set out for the Holy Land by way of Marseilles. A like army of German children, 20,000 strong, led by a boy named Nicholas, crossed the Alps at Mont Cenis. A second army of German children, numbering nearly 20,000, crossed the Alps by a more easterly route, touching the sea at Brindisi. Their idea was that the Mediterranean would open a path for them to Palestine and that Jerusalem would be recovered and the Moslems made Christians by miracles. Some of the children became discouraged and returned to their homes, many stopped by the way, but most of them either perished on the march, or were lost at sea or sold into slavery.

The fifth crusade (1228) made Frederick II 'of Germany and Sicily, king of Jerusalem. In 1244 a new horde of Turks made themselves masters of Jerusalem. A sixth crusade (1249) followed, led by Louis IX of France, against Egypt, now held to be the key to Palestine. Louis was taken prisoner, and had to pay a heavy ransom. The seventh crusade (1270) was led by him and by Prince Edward, afterward Edward I of England. Nothing was accomplished by this adventure, however. Acre, Antioch, and Tripoli were held by the Templars and other knights for some time; but Acre, followed by the others, surrendered in 1291.