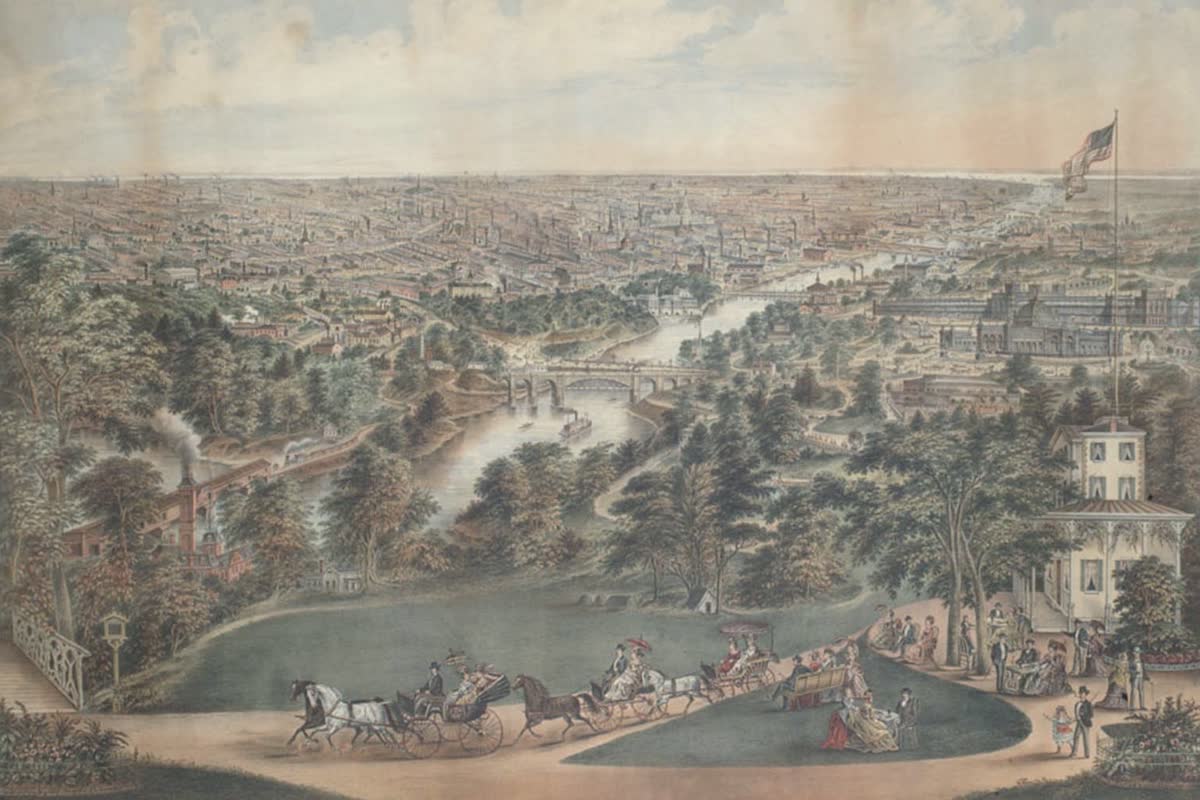 The Centennial International Exhibition of 1876, the first official World's Fair to be held in the United States, was held in Philadelphia, Pennsylvania, from May 10 to November 10, 1876, to celebrate the 100th anniversary of the signing of the Declaration of Independence in Philadelphia. Officially named the International Exhibition of Arts, Manufactures, and Products of the Soil and Mine, it was held in Fairmount Park along the Schuylkill River on fairgrounds designed by Herman J. Schwarzmann. Nearly 10 million visitors attended the exposition, and 37 countries participated in it.

It opened in Fairmount Park to great fanfare on May 10, 1876, and closed with equal flourish six months later. Modeled after the Crystal Palace Great Exhibition in London in 1851, and the first in a long line of major “world’s fairs” in the United States, the Centennial exhibited national pride and belief in the importance of education and progress through industrial innovation. An additional mission of the Centennial grew from a desire to forgive and forget the Civil War.

More than 200 buildings were constructed within the Exposition's grounds, which were surrounded by a fence nearly three miles long. There were five main buildings in the exposition. They were the Main Exhibition Building, Memorial Hall, Machinery Hall, Agricultural Hall, and Horticultural Hall. Apart from these buildings, there were separate buildings for state, federal, foreign, corporate, and public comfort buildings. This strategy of numerous buildings in one exposition set it apart from the previous fairs around the world that had relied exclusively on having one or a few large buildings.

The exposition also featured many well-known products including Alexander Graham Bell's first telephone, set up at opposite ends of Machinery Hall, Thomas Edison's automatic telegraph system, screw-cutting machines that dramatically improved the production of screws and bolts from 8,000 to 100,000 per day, and a universal grinding machine by the Brown & Sharpe Manufacturing Company. Air-powered tools along with a mechanical calculator by George B. Grant were exhibited. John A. Roebling & Sons Company displayed a slice of their 5 ¾ inch diameter cable to be used for the Brooklyn Bridge. New food products such as popcorn and ketchup, along with root beer, were also exhibited.

The right arm and torch of the Statue of Liberty were showcased at the exposition. For a fee of 50 cents, visitors could climb the ladder to the balcony, and the money raised this way was used to fund the pedestal for the statue. Technologies introduced at the fair include the Corliss Steam Engine. Pennsylvania Railroad displayed the John Bull steam locomotive that was originally built in 1831. The Waltham Watch Company displayed the first automatic screw-making machinery and won the Gold Medal in the first international watch precision competition. Until the start of 2004, many of the exposition's exhibits were displayed in the Smithsonian Institution's Arts and Industries Building in Washington, D.C., adjacent to the Castle building.

Still basking in afterglow of its victory in the Franco-Prussian War of 1870-71, the newly founded German Empire foregrounded its arms industry, especially the powerful Krupp guns and heavy cannons that were sold and exported to numerous nations in the following years. By way of contrast, the craftsmanship of France, which had been defeated in the Franco-Prussian War, was represented by the Gothic Revival high altar that Edward Sorin, founder of University of Notre Dame, had commissioned from the workshop of Désiré Froc-Robert & Sons in Paris. After the exposition, the altar was installed at the Basilica of the Sacred Heart on Notre Dame's campus where it remains to this day.

For Mexico, which was emerging from a long period of internal disorder and foreign invasions, the exposition was an opportunity for the Liberal regime of President Sebastián Lerdo de Tejada to garner international recognition of his regime and to counter anti-Mexican public opinion in the United States. Prominent Mexican painters including José María Velasco, José Obregón, and Santiago Rebull exhibited there. Velasco's work was greatly admired, gaining him international recognition and enhancing his standing in Mexico.