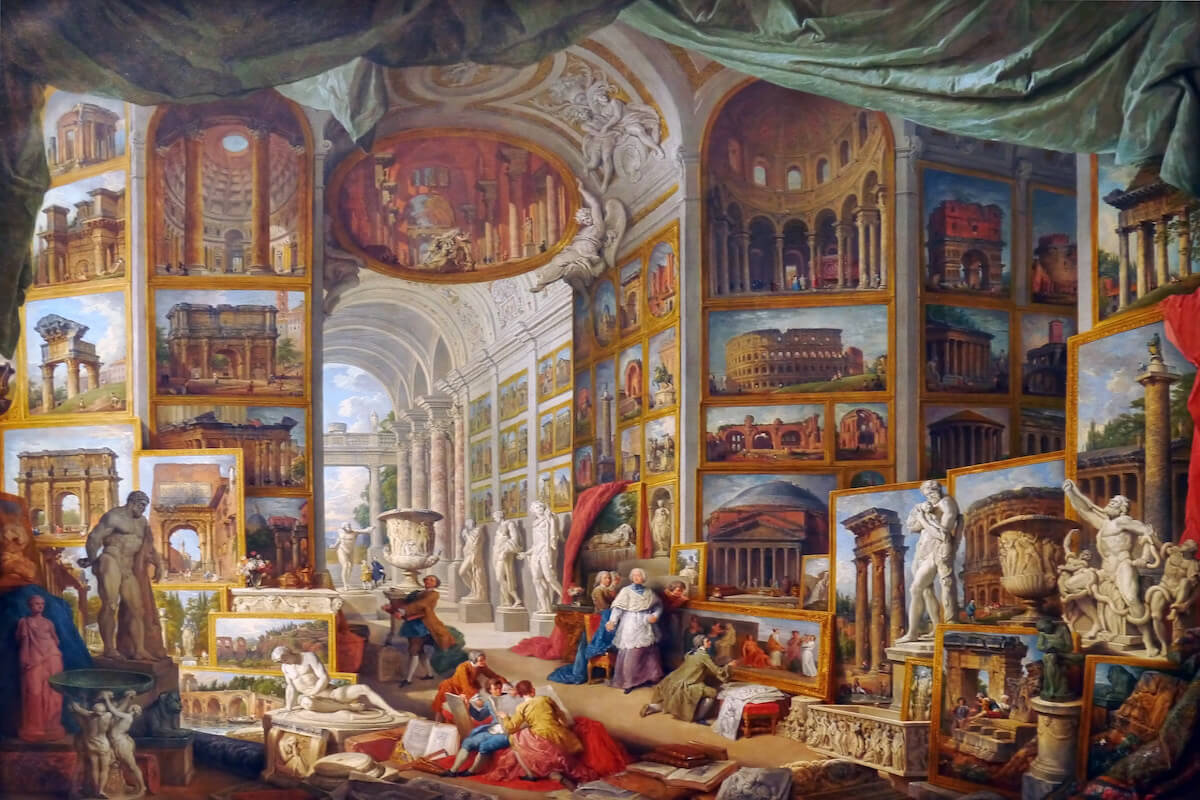 When we think of "all creation," we think of the sky and the earth and all things in and of and around the sky and earth, including, finally, people and the things they have created. To this whole concept we sometimes apply the name of Nature. When we wish to distinguish from the rest of nature the things that human beings have accomplished, we sometimes use the word Art. This word is used in other senses, too, but in its largest sense it includes all those things that have been added by man to nature as he found her. In this light art might be said to begin where nature leaves off—to be, in other words,"all but nature." As a matter of fact, however, we know that nature never does and never will "leave off" so long as man "keeps on," and the art is simply our name for Nature, when she works through man's intention.

The stem A R from which the word art is descended is probably the same stem from which we get such words as articulate, "to fashion," "to join," and arithmetic, fundamentally, "a putting together," as well as artificial and artisan. The word Art signifies a doing, a making, a fashioning or a putting together, and it usually implies that the thing is accomplished by human skill.

Dr. Johnson's definition for art is "The power of doing something which is not taught by nature or by instinct;" for example we say, "the art of making violins." But the word has other applications; we have already seen that it signifies not only the power of doing, but also the doing itself; as, when we speak of "devoting one's life to art," we mean, usually, the production of works of art. Besides this one word may mean the principles which govern the doing; as in the phrase, "a training in art. Lastly, the word is used with reference to the thing done–and we speak of "French art" when we mean the productions of the artists of France.

The various arts are, in our day broadly divided into two classes, ordinarily distinguished as the useful arts and the fine arts. The meaning of the former of these terms is self-evident and it, in turn covers such subdivisions as the liberal arts, industrial arts, manual arts, household arts and others. The second term, the fine arts (see Fine arts), designates those activities which have their root in man's impulsive nature, with beauty in some form as their result.

The word art is nowadays often applied to fine arts alone; thus we sometimes epak of "art-lovers," meaning persons who are interested in the fine arts; and sometimes the significance of the term is narrower still so that it refers simply to sculpture and painting or even the painting only.

When any other activity than the fine arts is specifically referred to as "an art," the idea of excellence is usually implied–either in the end to the attained or in the mode of attaining the end; as, "the art of flying;" "the conjuror's art;" "the art of boiling an egg"

At all times some art or arts have been held in higher esteem than others, this often being due to the fact that some arts demand a more complex use of the faculties than others and sometimes to the circumstances under which the various arts are practiced. Under the feudal system for instance, warfare was regarded as one of the highest and most important of arts. In communities like ancient Rome, where the land was tilled by free cultivators, agriculture was considered one of the highest arts. In Pompeii, where the art of painting was practiced by the slaves exclusively, this came to be regarded as one of the meaner arts. In medieval Italy, where commerce and manufacturing became highly organized, they were ranked among the "greater arts," and the word art (arte) was used to designate the guilds or companies by which these activities were carried on.

There is standing in Florence to this day a beautiful building, erected by the Arte of the Wool Merchants; connected with it is a corn-warehouse decorated with statues of the saints, contributed by the arte or guilds of the city, and executed by the best artists of the time.

We have spoken of the term art as covering all human activity. We have thus far avoided any special reference to that form of human activity which consists in the contemplation and analysis of nature— the subject which we call science. Nevertheless, since science strictly speaking, does not aim to produce things, but only to ascertain truths, it is clearly to be seen that it can be included only in the broadest interpretation of the term we are defining. If we can show what part of the field of human activity belongs to science, we may, by establishing its boundaries, find put just what is the field of art.

With what material does science deal? Our premise was that science deals with existing fact; all facts in nature fall within the scope of science. What is it that science does with these facts? Science observes, records, and in so far as possible explains these facts, shows their relations, one to another, and makes deductions from them. Now, with what does art deal? Art, since it adds to those things which nature has provided, deals with the production or attainment of ends, first assuming the desirability of such ends. Architecture, the art of building, for instance, assumes the need of houses and sets about producing them. Architecture calls in science with its knowledge of the stone, wood and clay which nature has provided and its knowledge of the effects of the elements upon such stone, wood and clay. Having obtained this knowledge from science, architecture acts upon it. To sum up the functions of art and science: "Science is the knowing, art is the doing. Art evolves, science involves."

It is thus seen that art cannot go on without science. Neither can science advance its investigations without the aid of art—that is to say, human activity— in carrying on its experiments and building its hypotheses. Science has been described as in the indicative mood, expressing itself by means of the declarative sentence: "Two and two are four." Art, then, is in the imperative: "Produce four." While science deals with the fundamentals by which ends are to be attained, art deals with the ends themselves, and with the attaining of them.