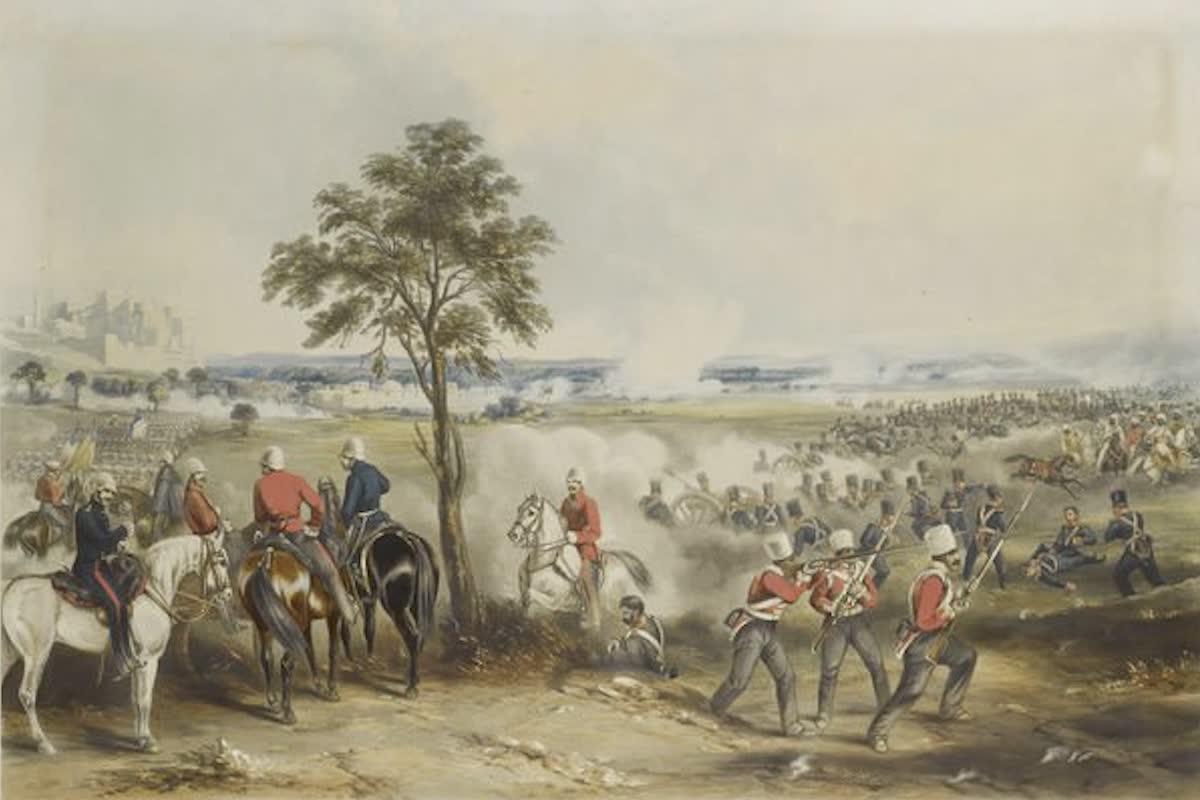 The Anglo-Sikh wars were a series of 1840s conflicts between the British East India Trading Company and the Sikh Empire. These two wars eventually resulted in the conquest and annexation of the Punjab.

There were two Anglo-Sikh wars:

The First Anglo-Sikh War was fought between the Sikh Empire and the East India Company between 1845 and 1846. It resulted in partial subjugation of the Sikh kingdom and cession of Jammu and Kashmir as a separate princely state under British suzerainty. The war was brought about by the insubordination of the Sikh army, which after the death of Ranjit Singh became uncontrollable and on the 11th of December 1845 crossed the Sutlej, and virtually declared war upon the British. The British authorities had foreseen the outbreak, and had massed sufficient troops at Ferozepore, Ludhiana and Umballa to protect the frontier, but not to offer provocation. So complete were the preparations for advance that on the 12th, the day after the Sikhs crossed the Sutlej, Sir Hugh Gough, the commander-in-chief, marched 16 m. with the Umballa force to Rajpura; on the 13th the governor-general, Sir Henry Hardinge, declared war, and by the 18th the whole army had marched 150 m. to Moodkee, in order to protect Ferozepore from the Sikh attack.

Wearied with their long march, the British troops were enjoying a rest, when the news came in that the Sikhs were advancing to battle at four o'clock in the afternoon. The British had some 10,000 men, and the Sikhs are estimated by some authorities as low as 10,000 infantry with 2000 cavalry and 22 guns. The battle opened with an artillery duel, in which the British guns, though inferior in weight, soon silenced the enemy, the 3rd Light Dragoons delivered a brilliant charge, and the infantry drove the enemy from position after position with great slaughter and the loss of seventeen guns. The victory was complete, but the fall of night prevented it from being followed up, and caused some of the native regiments to fire into each other in the confusion.

After the battle of Moodkee Sir Henry Hardinge volunteered to serve as second in command under Sir Hugh Gough, a step which caused some confusion in the ensuing battle.Ferozeshah. At 4 A.M. on the 21st of December the British advanced from Moodkee to attack the Sikh entrenched camp under the command of Lai Singh at Ferozeshah, orders having been sent to Sir John Littler, in command at Ferozepore, to join the main British force. At 11 A.M. the British were in front of the Sikh position, but Sir John Littler, though on his way, had not yet arrived. Sir Hugh Gough wished to attack while there was plenty of daylight; but Sir Henry Hardinge reasserted his civil authority as governor-general, and forbade the attack until the junction with Littler was effected. The army then marched on to meet Littler and the battle did not begin until between 3.30 and 4 P.M.

The engagement opened with an artillery duel, in which the British again failed to gain the mastery over the Sikhs. The infantry, therefore, advanced to the attack; but the Sikh muskets were as good as the British, and fighting behind entrenchments they were a most formidable foe. Sir John Littler's attack was repulsed, the 62nd regiment losing heavily in officers and men, while the sepoys failed to support the European regiments. But the Moodkee force, undaunted, stormed and captured the entrenchment, though the different brigades and regiments lost position and became mixed up together in the darkness. The army then passed the night on the Sikh position, while the Sikhs prowled round keeping up an incessant fire. In the morning the British found that they had captured seventy-three pieces of cannon and were masters of the whole field; but at that moment a fresh Sikh army, under Tej Singh, came up to the assistance of the scattered forces of Lai Singh. The British were exhausted with their sleepless night, the native troops were shaken, and a determined attack by this fresh army might have won the day; but Tej Singh, after a half-hearted attack, which was repulsed, marched away, whether from cowardice, incapacity or treason, and left the British masters of the position.

After the battle of Ferozeshah the Sikhs retired behind the Sutlej, but early in January they again raided across the river near Ludhiana, and Sir Harry Smith was detached to protect that city.Aliwal. On the 21st of January he was approaching Ludhiana when he found the Sikhs under Runjoor Singh in an entrenched position flanking his line of march at Budhowal. Sir Harry Smith passed on without fighting a general action, but suffered considerable loss in men and baggage. After receiving reinforcements Sir Harry again advanced from Ludhiana and attacked the Sikhs at Aliwal on the 28th of January. An attack upon the Sikh left near the village of Aliwal gave Sir Flarry the key of the position, and a brilliant charge by the 16th Lancers, which broke a Sikh square, completed their demoralization. The Sikhs fled in confusion, losing sixty-seven guns, and by this battle were expelled from the south side of the Sutlej.

Ever since Ferozeshah Sir Hugh Gough had been waiting to receive reinforcements, and on the 7th of February his siege train arrived, while on the following day Sir Harry Smith's force returned to camp Sobraon. On the 10th of February Sir Hugh attacked the Sikhs, who occupied a strong entrenched position in a bend of the Sutlej. After two hours' cannonading, the infantry attack commenced at 9 A.M. The advance of the first brigade was not immediately successful, but the second brigade following on carried the entrenchments. The cavalry then charged down the Sikh lines from right to left and completed the victory. The Sikhs, with the river behind them, suffered terrible carnage, and are computed to have lost 10,000 men and 67 guns. The British losses throughout the campaign were considerably heavier than was usual in Indian warfare; but this was partly due to the fact that the Sikhs were the best natural fighters in India, and partly to the lack of energy of the Hindostani sepoys. After the battle of Sobraon the British advanced to Lahore, where the treaty of Lahore was signed on the 11th of March.

For two years after the battle of Sobraon the Punjab remained a British protectorate, with Sir Henry Lawrence as resident; but the Sikhs were unconvinced of their military inferiority, the Rani Jindan and her ministers were constantly intriguing to recover their power, and a further trial of strength was inevitable. The outbreak came at Multan, where on the 20th of April 1848 the troops of the Dewan Mulraj broke out and attacked two British officers, Mr Vans Agnew and Lieutenant Anderson, eventually murdering them. On hearing of the incident, Lieut. Herbert Edwardes, who was Sir Henry Lawrence's assistant in the Derajat, advanced upon Multan with a force of levies drawn from the Pathan tribes of the frontier; but he was not strong enough to do more than keep the enemy in check until Multan was invested by a Bombay column under General Whish.

In the meantime Edwardes wished for an immediate British advance upon Multan; but Lord Gough, as he had now become, decided on a cold season campaign, on the ground that, if the Sikh government at Lahore joined in the rising, the British would require all their available strength to suppress it. Multan was invested on the 18th of August by General Whish in conjunction with the Sikh general Shere Singh; but during the course of the siege Shere Singh deserted and joined the rebels, thus turning the rising into a national war. The siege of Multan was temporarily abandoned, but was resumed in November, when Lord Gough's main advance had begun, and Mulraj surrendered on the 22nd of January. In the meantime Lord Gough had collected his army and stores, and on the 9th of November crossed the Sutlej.

On the 22nd of November there was a cavalry skirmish at Ramnagar, in which General Cureton and Colonel Havelock were killed. For a month after this Lord Gough remained inactive, waiting to be reinforced by General Whish from Multan-Chillianwalla. but at last he decided to advance without General Whish, and fought the battle of Chillianwalla on the 13th of January 1849. Lord Gough had intended to encamp for the night; but the Sikh guns opening fire revealed the fact that their army had advanced out of its entrenchments, and Lord Gough decided to seize the opportunity and attack at once. An hour's artillery duel showed that the Sikhs had the advantage both in position and guns, and the infantry advance commenced at three o'clock in the afternoon.

The battle resulted in great loss to the European regiments, the 24th losing all its officers in a few minutes, while the total loss in killed and wounded amounted to 2338; but when darkness fell the British were in possession of the whole of the Sikh line. Lord Gough subsequently retired to the village of Chillianwalla, and the Sikhs returned and carried off their guns. After the battle Lord Gough received an ovation from his troops, but his losses were thought excessive by the public in England and the directors of the East India Company, and Sir Charles Napier was appointed to supersede him. Before, however, the latter had time to reach India, the crowning victory of Gujrat had been fought and won.

After the fall of Multan General Whish marched to join Lord Gough, and the junction of the two armies was effected on the 18th of February. In the meantime the Sikhs had withdrawn from their strong entrenchments at Russool, owing to want of provisions, Gujrat. and marched to Gujrat, which Lord Gough considered a favorable position for attacking them. By a series of short marches he prepared the way for his "last and best battle."

In this engagement, for the first time in either of the Sikh wars, the British had the superiority in artillery, in addition to a picked force of 24,000 men. The battle began on the morning of the 21st of February with two and a half hours' artillery fire, which was overwhelmingly in favor of the British. At 11.30 A.M. Lord Gough ordered a general advance covered by the artillery; and an hour and a half later the British were in possession of the town of Gujrat, of the Sikh camp, and of the enemy's artillery and baggage, and the cavalry were in full pursuit on both flanks. In this battle the British only lost 96 killed and 700 wounded, while the Sikh loss was enormous, in addition to 67 guns.

The decisive victory at the Battle of Gujarat ended the Second Anglo-Sikh War. On the 12th of March the Sikh leaders surrendered at discretion, and the Punjab was annexed to British India.