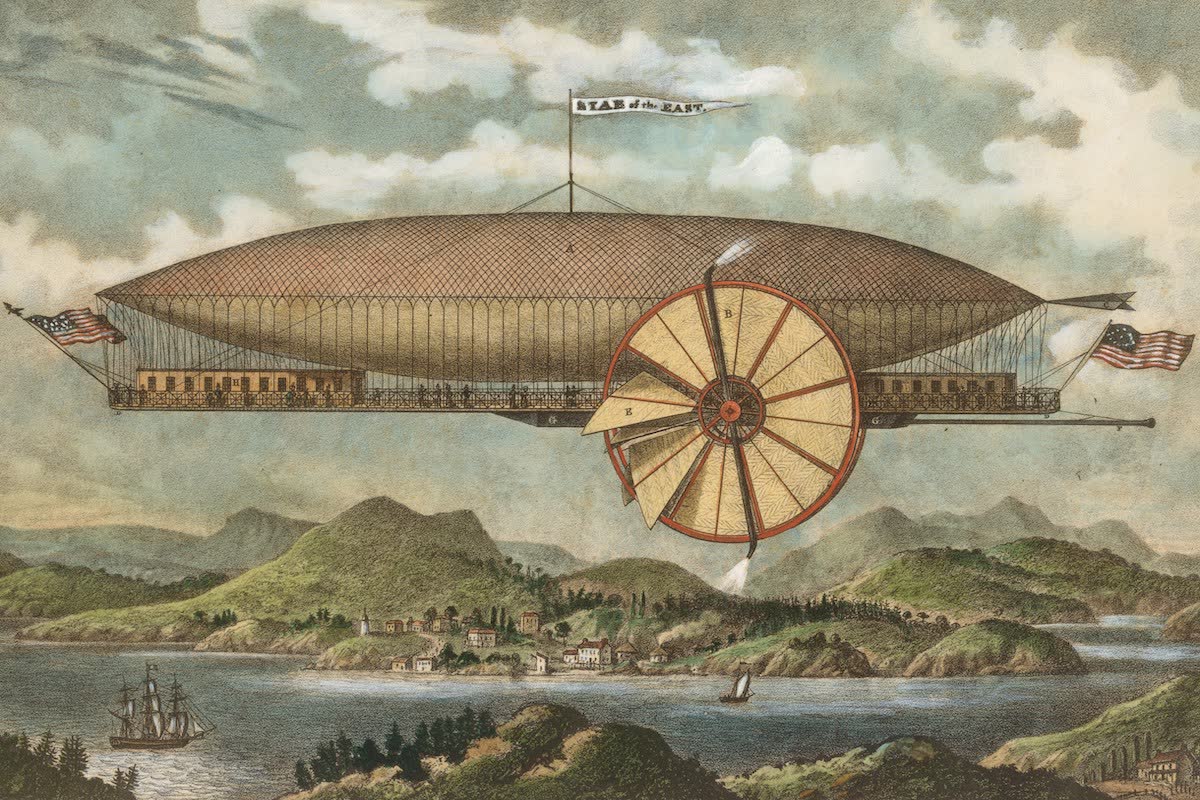 All three types have four principal parts: a cigar-shaped bag, or balloon, that is filled with a lighter-than-air gas; a car or gondola that is slung beneath the balloon and holds the crew and passengers; engines that drive propellers; and horizontal and vertical rudders to steer the craft. Nonrigids are simply balloons with cars attached by cables; if the gas escapes, the balloon collapses.

Semirigids likewise depend on the internal gas to maintain the balloon’s shape, but they also have a structural metal keel that extends longitudinally along the balloon’s base and supports the car. Rigids consist of a light framework of aluminum-alloy girders that is covered with fabric but is not airtight. Inside this framework are a number of gas-filled balloons, each of which can be filled or emptied separately; rigids keep their shape whether they are filled with gas or not.

The usual gases used for lifting airships are hydrogen and helium. Hydrogen is the lightest known gas and thus has great lifting capacity, but it is also highly flammable and has caused many fatal airship disasters. Helium is not as buoyant but is far safer than hydrogen because it does not burn. The gas-containing envelopes of early airships used cotton fabric impregnated with rubber, a combination that was eventually superseded by synthetic fabrics such as neoprene and Dacron.

The first successful airship was constructed by Henri Giffard of France in 1852. Giffard built a 160-kilogram (350-pound) steam engine capable of developing 3 horsepower, sufficient to turn a large propeller at 110 revolutions per minute. To carry the engine weight, he filled a bag 44 metres (144 feet) long with hydrogen and, ascending from the Paris Hippodrome, flew at a speed of 10 km (6 miles) per hour to cover a distance of about 30 km (20 miles).

In 1872 a German engineer, Paul Haenlein, first used an internal-combustion engine for flight in an airship that used lifting gas from the bag as fuel. In 1883 Albert and Gaston Tissandier of France became the first to successfully power an airship using an electric motor. The first rigid airship, with a hull of aluminum sheeting, was built in Germany in 1897. Alberto Santos-Dumont, a Brazilian living in Paris, set a number of records in a series of 14 nonrigid gasoline-powered airships that he built from 1898 to 1905.

The most-successful operator of rigid airships was Ferdinand, count von Zeppelin, of Germany, who completed his first airship, the LZ-1, in 1900. This technically sophisticated craft, 128 metres (420 feet) long and 11.6 metres (38 feet) in diameter, had an aluminum frame of 24 longitudinal girders set within 16 transverse rings and was powered by two 16-horsepower engines; it attained speeds approaching 32 km (20 miles) per hour. Zeppelin continued improving his designs through World War I, when many of his airships (called zeppelins) were used to bomb Paris and London. Airships were also used by the Allies during the war, chiefly for antisubmarine patrol.

In the 1920s and ’30s, airship construction continued in Europe and the United States. A British dirigible, the R-34, made a round-trip transatlantic crossing in July 1919. In 1926 an Italian semirigid airship was successfully used by Roald Amundsen, Lincoln Ellsworth, and General Umberto Nobile to explore the North Pole. In 1928 the Graf Zeppelin was completed by Zeppelin’s successor, Hugo Eckener, in Germany. Before it was decommissioned nine years later, it made 590 flights, including 144 ocean crossings. In 1936 Germany inaugurated a regular transatlantic passenger service with the dirigible Hindenburg.

Despite these achievements, airships were virtually abandoned in the late 1930s because of their cost, their slow speed, and their intrinsic vulnerability to stormy weather. In addition, a succession of disasters—the best known probably being the explosion of the hydrogen-filled Hindenburg in 1937—coupled with advances in heavier-than-air craft in the 1930s and ’40s made dirigibles commercially obsolete for most applications.

There are no works available for the Airships collection.