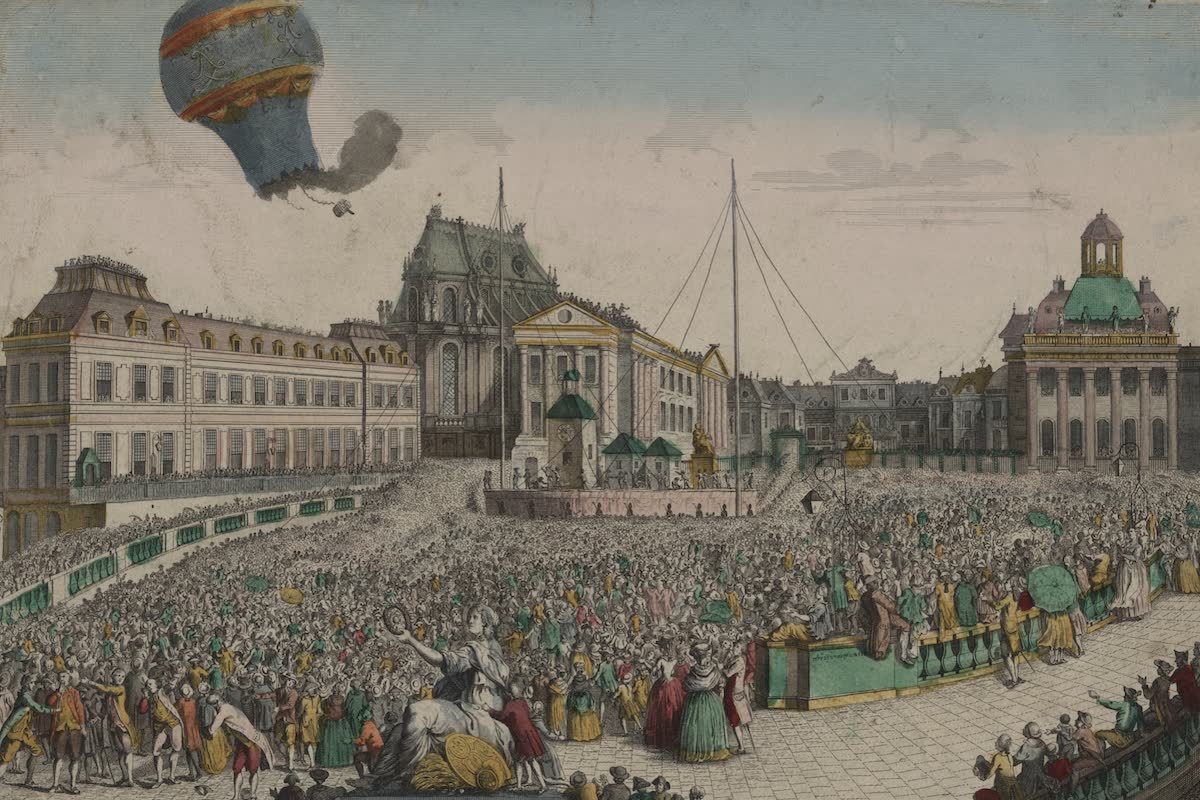 Aeronautics is the science or art involved with the study, design, and manufacturing of air flight capable machines, and the techniques of operating aircraft and rockets within the atmosphere. Attempts to fly without any real aeronautical understanding have been made from the earliest times, typically by constructing wings and jumping from a tower with crippling or lethal results.

The modern era of lighter-than-air flight began early in the 17th century with Galileo's experiments in which he showed that air has weight. Around 1650 Cyrano de Bergerac wrote some fantasy novels in which he described the principle of ascent using a substance (dew) he supposed to be lighter than air, and descending by releasing a controlled amount of the substance.

Francesco Lana de Terzi measured the pressure of air at sea level and in 1670 proposed the first scientifically credible lifting medium in the form of hollow metal spheres from which all the air had been pumped out. These would be lighter than the displaced air and able to lift an airship. His proposed methods of controlling height are still in use today; by carrying ballast which may be dropped overboard to gain height, and by venting the lifting containers to lose height. In practice de Terzi's spheres would have collapsed under air pressure, and further developments had to wait for more practicable lifting gases.

From the mid-18th century the Montgolfier brothers in France began experimenting with balloons. Their balloons were made of paper, and early experiments using steam as the lifting gas were short-lived due to its effect on the paper as it condensed. Mistaking smoke for a kind of steam, they began filling their balloons with hot smoky air which they called "electric smoke" and, despite not fully understanding the principles at work, made some successful launches and in 1783 were invited to give a demonstration to the French Academie des Sciences.

Meanwhile, the discovery of hydrogen led Joseph Black in c. 1780 to propose its use as a lifting gas, though practical demonstration awaited a gas tight balloon material. On hearing of the Montgolfier Brothers' invitation, the French Academy member Jacques Charles offered a similar demonstration of a hydrogen balloon. Charles and two craftsmen, the Robert brothers, developed a gas tight material of rubberized silk for the envelope. The hydrogen gas was to be generated by chemical reaction during the filling process.

The Montgolfier designs had several shortcomings, not least the need for dry weather and a tendency for sparks from the fire to set light to the paper balloon. The manned design had a gallery around the base of the balloon rather than the hanging basket of the first, unmanned design, which brought the paper closer to the fire. On their free flight, De Rozier and d'Arlandes took buckets of water and sponges to douse these fires as they arose. On the other hand, the manned design of Charles was essentially modern. As a result of these exploits, the hot-air balloon became known as the Montgolfiere type and the hydrogen balloon the Charliere.

Charles and the Robert brothers' next balloon, La Caroline, was a Charliere that followed Jean Baptiste Meusnier's proposals for an elongated dirigible balloon, and was notable for having an outer envelope with the gas contained in a second, inner ballonet. On 19 September 1784, it completed the first flight of over 100 km, between Paris and Beuvry, despite the man-powered propulsive devices proving useless.

In an attempt the next year to provide both endurance and controllability, de Rozier developed a balloon having both hot air and hydrogen gas bags, a design which was soon named after him as the Roziere. The principle was to use the hydrogen section for constant lift and to navigate vertically by heating and allowing to cool the hot air section, in order to catch the most favorable wind at whatever altitude it was blowing. The balloon envelope was made of goldbeater's skin. The first flight ended in disaster and the approach has seldom been used since.

Sir George Cayley (1773-1857) is widely acknowledged as the founder of modern aeronautics. He was first called the "father of the aeroplane" in 1846 and Henson called him the "father of aerial navigation." He was the first true scientific aerial investigator to publish his work, which included for the first time the underlying principles and forces of flight.

In 1809 he began the publication of a landmark three-part treatise titled "On Aerial Navigation" (1809-1810). In it he wrote the first scientific statement of the problem, "The whole problem is confined within these limits, viz. to make a surface support a given weight by the application of power to the resistance of air." He identified the four vector forces that influence an aircraft: thrust, lift, drag and weight and distinguished stability and control in his designs.

He developed the modern conventional form of the fixed-wing aeroplane having a stabilizing tail with both horizontal and vertical surfaces, flying gliders both unmanned and manned. He also introduced the use of the whirling arm test rig to investigate the aerodynamics of flight, using it to discover the benefits of the curved or cambered aerofoil over the flat wing he had used for his first glider.

He also identified and described the importance of dihedral, diagonal bracing and drag reduction, and contributed to the understanding and design of ornithopters and parachutes. Another significant invention was the tension-spoked wheel, which he devised in order to create a light, strong wheel for aircraft undercarriage.

There are no works available for the Aeronautics collection.