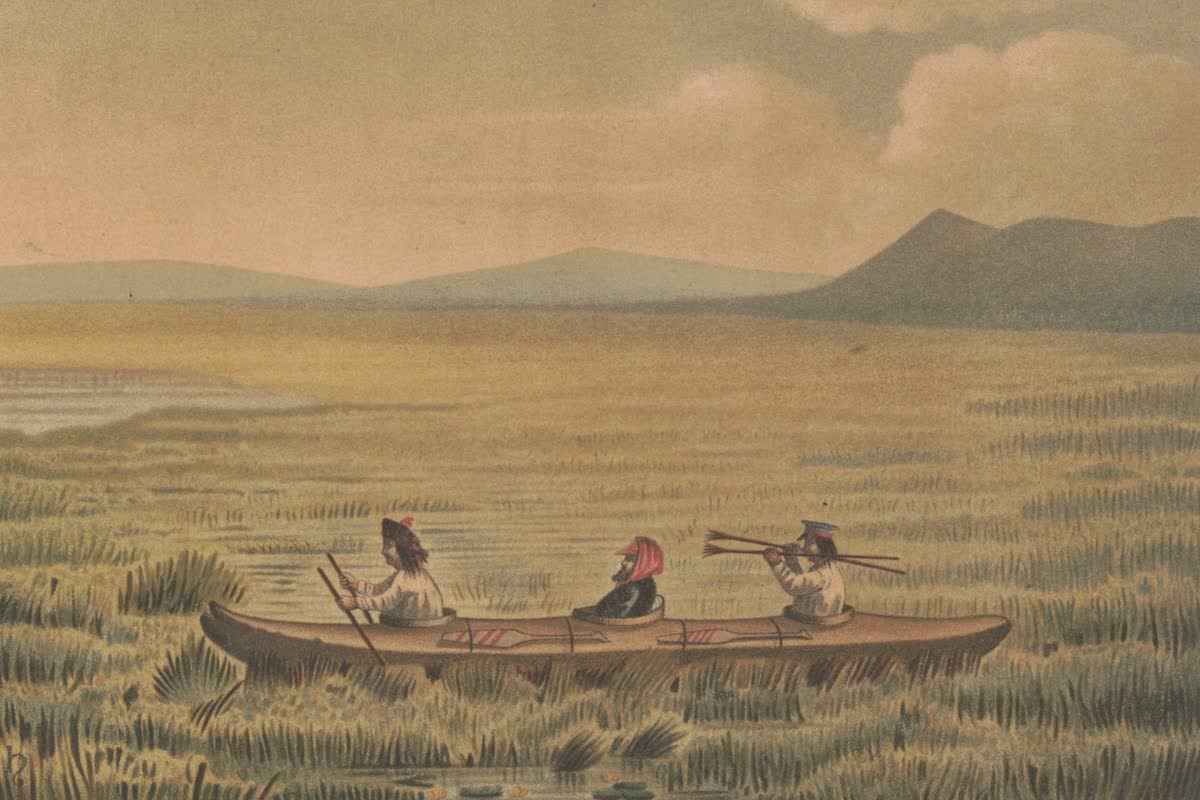 The Yukon is the largest river in Alaska, and the fifth largest in N. America. With its longest tributaries not in Alaska, the Lewes and the Teslin (or Hootalinqua), its length is about 2300 m., in the form of a great arc, beginning in the Yukon District of British Columbia, near the Pacific Ocean, and ending at the Bering Sea coast. Its catchment area is about 330,000 sq. m., more than one-half of which lies in Canada.

The Lewes river rises in Lake Bennet (Yukon District) on the N. slope of the Coast Range, about 25 m. inland from the Lynn Canal (at the head of Chatham Strait), and flows N. through a chain of lakes, its confluence with the Pelly river, at Selkirk, Yukon District, about 120 m. due E. of the Alaskan-Canadian boundary, forming the headwaters of the Yukon. Flowing thence N.W., the Yukon turns abruptly to the S.W. near Fort Yukon, Alaska, on the Arctic Circle, and continues nearly at right angles to its former course to a point S. of the head of Norton Sound, where it turns again and flows in a N.W. direction, emptying into the Sound from its S. shore. The length of the river, from its headwaters to its mouth, is about 1500 m.

The Yukon Valley comprises four sub-provinces, or physiographic divisions; in their order from the headwaters of the river these divisions have been called the "Upper Yukon," "Yukon Flats," "Rampart Region" and "Lower Yukon." The "Upper Yukon" Valley is about 450 m. long and from 1 to 3 m. broad, and is flanked by walls rising to the plateau level from 1500 to 3000 ft. above the stream. In this part of its course the Yukon receives from the S. the Selwyn river (about 40 m. below the junction of the Lewes and Pelly rivers); from the W. the White river (about 60 m. below the Selwyn); from the N. the Stewart river (about 10 m. below the White), one of the largest tributaries of the Yukon; from the E. the Klondike river (near 64° N.); from the W. Fortymile Creek (about 40 m. above the Alaskan-Canadian boundary line), and many other smaller streams.

The "Yukon Flats" flank the river for about 200 m. and are from 40 to 100 m. wide. Here the stream varies in width from 10 to nearly 20 m., and involves a confused network of constantly changing channels. Here, too, the river makes its great bend to the S.W., and its channels are constantly changing. The "Flats" are monotonous areas of sand bars and low islands, thickly wooded with spruce. The principal tributaries here are the Porcupine river (an important affluent, which enters the main stream at the great bend about 3 m. N. of the Arctic Circle); the Chandlar river, also confluent at the great bend, from the N., and, near the W. edge of the Flats, the Dali river, also from the N.

The "Rampart Region" begins near 66° N., where the "Flats" end abruptly, and includes about 110 m. of the valley, from 1 to 3 m. wide, and extending to the mouth of the Tanana. No large tributaries are received in this part of the river. The Lower Yukon includes that portion between the Ramparts and the sea, a stretch of about 800 m. At the mouth of the Tanana (which enters the main stream from the S.) the gorge opens into a lowland from 15 to 20 m. wide. Along the N.W. boundary of the valley are low mountains whose base the Yukon skirts, and it continues to press upon its N. bank until the delta is reached. The valley is never less than 2 or 3 m., and the river has many channels and numerous islands; it has walls nearly to the head of the delta, though about 100 m. above the delta the S. wall merges into the lowland coastal plain; the relief is about 1000 ft.

At the W. edge of the Ramparts the Yukon receives the Tanana river, its longest tributary lying wholly within Alaska. The Tanana Valley is about 400 m. long, nearly parallel to the Yukon from about due W. of its headwaters to the great bend, and drains about 25,000 sq. m. Its sources are chiefly glaciers in the Alaskan Range and it receives many tributaries. The Yukon delta begins near 63° N. Here the main stream branches into several channels which follow N. or N.W. courses to Norton Sound. The northernmost of these channels is the Apoon Pass, and the most southerly is Kwikluak Pass; their outlets are about 75 m. apart on the coast, and from 40 to 50 m. from the head of the delta. Between them is a labyrinth of waterways, most of the intervening land being not more than 10 ft. above low tide. The stream is mud-laden throughout its course, and though the sediment is heavier above the "Flats" than below them (where the slower current permits the settling of much of the silt), so much of it is carried to the river's mouth that the delta is being steadily extended. Immediately S. of the Yukon delta proper is that of the Kushkowim, into which undoubtedly the Yukon's waters once found their way.

The Yukon is navigable from May till September, and steamers ply on several of its larger tributaries, making the aggregate navigable waters about 3500 m., about three-fourths of which are in Alaska. The nearest harbour for ocean-going vessels is a poor one at St Michaels Island, about 60 m. N.E. of the delta; here freight and passengers are transferred to flat-bottomed river steamers. These enter the delta and the river by the Apoon Pass, which is about 4 ft. deep at mean low water, the current varying from 1 1/2 to 4 m. an hour.

The Lewes (about 400 m. long) is navigable (with some difficulty, during low water, at Lake Lebarge) as far as White Horse Rapids, which, with Miles Canyon, obstruct the river for a few miles; above them the stream is again navigable to its source, about 100 m. beyond. The Pacific & Arctic railway from Skagway to White Horse (111 m.) overcomes these obstructions, however, for traffic and travel; and even the dangerous White Horse Rapids may be run by a skilful pilot in a small boat, as was done repeatedly by the gold-seekers in 1896-97. The Stewart river, seldom less than 150 yds. wide, is navigable by light-draught steamers to Frazer Falls, a distance of nearly 200 m. The Porcupine is navigable, in high water, to about the Alaska-Yukon boundary line (c. 90 m.); the Chandlar for a few miles; the Tanana (which is about 500 m. long) for about 225 m. to the Chena river (which is navigable for about 100 m.); and the Tolovana, another affluent of the Tanana, is also navigable for about 100 m.

In 1842-43 the Yukon was explored by the Russian Lieutenant Zagoskin, who built a trading post at Nulato, ascended the river (which he called the Kwikpak) as far as the Tanana, made a track survey of the stream to that point and reported that it was not navigable beyond there. In 1861 Robert Kennicott made his way overland by the Hudson Bay route from the Mackenzie river down the Yukon to Fort Yukon, and in 1865 he and Captain Charles S. Bulkley led the expedition sent out by the Western Union Telegraph Company to survey a route for a land telegraph line to Europe by way of Alaska and Siberia. Kennicott died at Nulato in 1866, and the expedition was abandoned in that year, but explorations were continued by other members, notably Dr William H. Dall,[1] with the result that valuable surveys were made and the Yukon identified as the Kwikpak of the earlier Russian surveys. Captain C. W. Raymond made a reconnaissance of the Yukon in 1869; the Indian route by the Lewes to the headwaters of the Yukon was used by gold prospectors as early as 1881, while in 1883 Lieutenant Frederick Schwatka (1849-1892) crossed the Chilkoot Pass (which he called "Perrier Pass"), descended the Lewes to Fort Selkirk, and down the river to the sea. Charles W. Homan, who accompanied Schwatka, made the first sketch survey of the great system; since then it has been frequently explored, but much of the region has not been mapped.

See Alfred H. Brooks, The Geography and Geology of Alaska U.S. Geol. Survey, Document No. 201 (Washington, 1906); also G. M. Dawson, Yukon District and British Columbia, Annual Report of the Geol. and Natural History Survey of Canada, vol. 3, pt. 1 (1889); William Ogilvie, The Klondike Official Guide (Buffalo, N.Y., 1898); C. W. Haynes, "An Expedition through the Yukon District," Nat. Geog. Mag. vol. 4 (1892); R. G. McConnell, Salmon River Gold Fields, Summary of Report of Geol. Survey of Canada (1901); idem, The Macmillan River, Yukon District, Summary of Report of the Geological Survey of Canada for 1902; A. H. Brooks, A Reconnaissance in the Tanana and White River Basins in 1898, Twentieth Annual Report, U.S. Geol. Survey (Washington, 1900); and A Reconnaissance from Pyramid Harbor to Eagle City, Alaska, Twenty-first Annual Report, ibid. (Washington, 1900), and other sources cited by Brooks in the first-named work. ? William Healey Dall (1845-?), American naturalist, was born in Boston, Massachusetts, served with the United States Coast Survey of Alaska from 1871 to 1884, became honorary curator of the United States National Museum in 1880, and in 1893 was appointed professor of invertebrate palaeontology at the Wagner Institute of Science, Philadelphia. He was palaeontologist to the United States Geological Survey in 1884-1909. The white mountain sheep, or Dall's sheep (Ovis dalli), discovered in 1884, was named in his honour.

There are no works available for the Yukon collection.