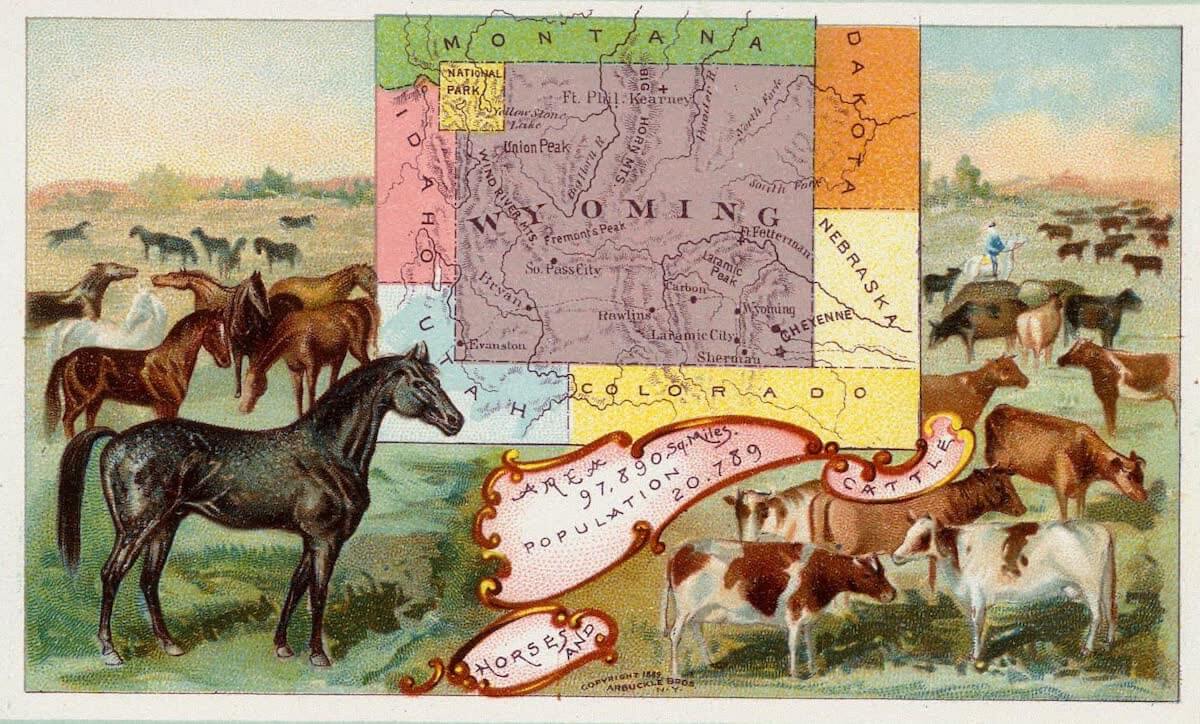 Wyoming is a western and central state of the Union, occupies the northwestern portion of the Rocky Mountains in the United States. The state is bounded on the north by Montana, on the east by Nebraska and South Dakota, on the west by Montana, Idaho and Utah and on the south by Utah and Colorado. The capital is Cheyenne (population 11,320). The other chief towns are Laramie (8,237) and Rock Spring (5,778). Population of the state around 1914 was 145,965.

Though Wyoming (a part originally of the Louisiana Purchase of 1803) was by Congressional Act erected into a territory in 1868, the region in early days was visited by hunters and fur-traders; while explorers, as Verandrye in 1743-4, are known to have gone over the district in pioneering expeditions and in search of game and furs even before the middle of the 18th century.

Early in the 19th century trappers from Montana are also known to have visited the Yellowstone region and gone as far inland as Laramie Fork of Platte River, where a fort was built in 1834, which in the following year was acquired by the American Fur Co. and later sold to the Federal government. Captain Bonneville and General Frémont, moreover, were among those familiar with the region in the thirties and forties. Settlement, however, was slow. Indeed it did not begin to be made until the passing through of the Mormons on their way to Utah and the subsequent finding of gold in the valley of Sweetwater River, aided by the construction of the Union Pacific.

In 1867 Cheyenne began to be settled, in 1868 Wyoming became a territory, and in 1869 Cheyenne became the capital. Before this there had been trouble with the Sioux, who resented the coming of white settlers. Subsequently the Indian difficulties were settled, reservations were assigned to the tribes, and about one and a half million acres were bought from the Shoshones and other natives and thrown open to settlement. Forest-reserves were also set apart in Yellowstone Park and othersections, and a chain of forts was erected by the government for the security of the region and the protection of the incomers and settlers.

The population having grown, especially in the south the movement originated to form a constitution and apply for statehood. This occurred in 1889, and on July 10, 1890, Wyoming became a state. Wyoming sends a single member to the lower House of Congress. Its chief executive officers besides the governor include a secretary of state, a treasurer and a superintendent of public instruction.

Wyoming is broken into a number of spurs or ranges, including the Snow and the Shoshone Mountains in the northeast, within which is the famed Yellowstone Park, with magnificent canyons and geysers. Southwestward lie Salt River, Teton and Gros Ventre Ranges, Wind River Range, Sweet water Mountains and Laramie Range; while south and southwest are Medicine Bow Mountains and Quien Hornet Mountain; in the northern section of the state are Big Horn Mountains and east of them Bear-Lodge Mountains.

Other elevations embrace Rattlesnake Range, the Green Mountains, the Powder River Range, the Bearspaw and Little Belt Mountains, each with its notable peaks, soaring here and there throughout the state from its 4,000 to 7,000 average elevations to a height of from 13,000 to close upon 14,000 feet. The slopes of these elevations are clad with forests, the timbered area being estimated at 12,500 square miles. The area of the state exceeds that of Oregon, being 97,890 square miles, with a length of 275 and an extreme breadth of 365 miles.

With its high average elevation, extensive mountain-ranges and its extremes of temperature in winter and summer and with insufficient rainfall, Wyoming is not well-adapted for agricultural operations. The climate, though dry and bracing, has extremes of temperature ranging from 120° F. in summer to 44° F. below zero in winter. In the north the mean average in January is 18°, and in the south it is 25°, with about 67° for both regions in summer. Though thus unsuited in large part for farming, the state nevertheless has extensive pasture-lands available for stock-grazing on the plains, though not a few are arid, with sandy soil, responding indifferently or not at all to irrigation.

Ranching perhaps is best suited to the prevailing conditions, though coal-mining, oil-production and lumbering are the chief industries. Wyoming is further handicapped by indifferent railway facilities and by lack of navigable rivers. Its chief streams, except those that have their outlet into the northern fork of Platte River, drain for the most part into rivers lying outside the state, as the Yellowstone in Montana, the Missouri in South Dakota and the Colorado in Utah. In the north the region is drained by the Yellowstone, with its tributaries of Big Horn, Tongue and Powder Rivers; in the south and east central region the drainage is effected by the northern fork of the Platte, with its tributaries of the Laramie, the Sweet-water and the Cheyenne; and in the southwestern section the principal stream is Green River, which drains into the Colorado. The chief lakes are the Yellowstone, lying within the park, and the Jackson, which is traversed by Snake River.

Besides private banks Wyoming had 29 national banks in 1911, with an aggregate capital of close upon 1¾ millions and individual deposits amounting to over $11,500,000. The state banks (49), with $1,157,000 of capital, had deposits amounting to $4,681,000. The receipts of the state approximated $600,000, while the expenditures were within $100,000 of the total income. The gross debt amounts to $120,000. The railway mileage is 1,644 miles. The Union Pacific traverses the southern part of the state, while the Chicago, Burlington and Quincy traverses its northeast corner. The Chicago and North-Western railroad, entering from the east, taps the center of Wyoming; while a junction is effected with this road from the south by the Colorado and Southern railroad.

Wyoming makes a poor showing as a manufacturing state, the number of industrial establishments in 1909 being only 268, with an aggregate capital amounting only to $6,195,000; 2,867 wage-earners; and total products of the value of $6,249,000. The principal industries embrace flour and grist mills, printing and publishing establishments and railroad repair-shops.

With a school population sparsely scattered over the state and not over 33,000 in number, there were 24,584 pupils enrolled in the public schools in 1910-11, while the average daily attendance was limited to 16,673, with 1109 teachers. There were also 1442 students enrolled in the high schools the same year. Higher education is represented by the University of Wyoming at Laramie, with 40 instructors and 300 students. The institution, besides a normal school department, has schools of agriculture, mining, commerce, mechanical engineering and music. Of penal and charitable institutions the state maintains a hospital at Rock Spring, with an auxiliary branch at Sheridan, an insane asylum at Evanston and a penitentiary at Rawlins.

There are no works available for the Wyoming collection.