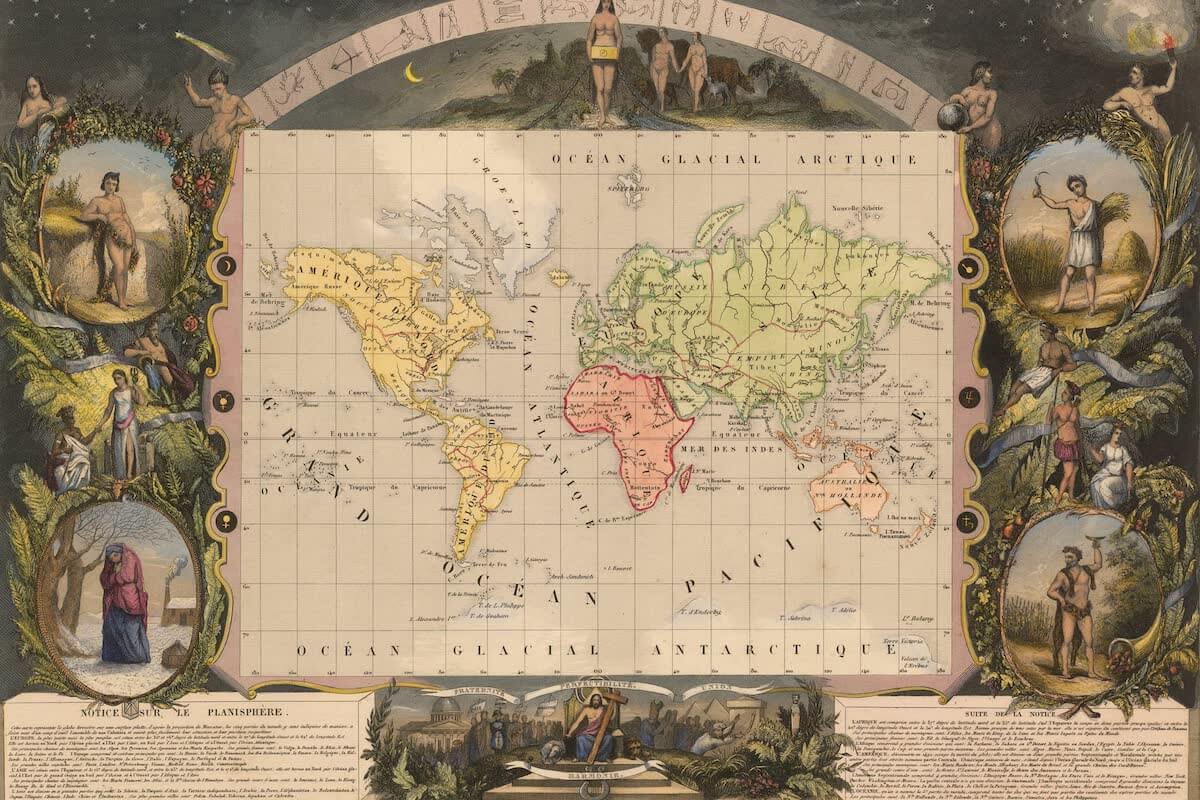 This collection is composed of works that include circumnavigations as well as visits to many different continents. Prior to the development of air travel these voyages were undertaken by sail or steam over the course of many months or even years and stopped as many common ports and places along the way. The word circumnavigation comes from the Latin word circumnavigare, from circum (around) and navigare (to sail) and means a voyage that encircles the world.

The first circumnavigation of Earth was the Magellan-Elcano expedition, which sailed from Seville, Spain in 1519 and returned in 1522, after crossing the Atlantic, Pacific, and Indian oceans. Many of the earliest circumnavigations as well as later ones which include brilliant illustrations are contained in this collection and form valuable historical material about many different cultures and locations around the globe.

For the wealthy, long voyages around the world, such as was done by Ulysses S. Grant, became possible in the 19th century, and the two World Wars moved vast numbers of troops around the planet. However, it was later improvements in technology and rising incomes that made such trips relatively common. Prior to this circumnavigations were completed with the backing of states with explorers like James Cook being outfitted with the best ships and equipment. Many colonial empires such as the British, French, Dutch, Russians all sent explorers to encircle the globe for achievements sake and many published works are the result of these voyages.

The first single voyage of global circumnavigation was that of the ship Victoria, between 1519 and 1522, known as the Magellan–Elcano expedition. It was a Castilian (Spanish) voyage of discovery, led initially by the Portuguese Ferdinand Magellan between 1519 and 1521, and then by the Spanish Juan Sebastián Elcano from 1521 to 1522. The voyage started in Seville, crossed the Atlantic Ocean, and after several stopovers rounded the southern tip of South America where the expedition discovered the Strait of Magellan, named after the fleet's captain.

It then continued across the Pacific discovering a number of islands on its way, including Guam before arriving in the Philippines. After Magellan's death in the Philippines in 1521, Elcano took command of the expedition and continued the journey across the Indian Ocean, round the Cape of Good Hope, north along the Atlantic Ocean, and back to Spain in 1522. Elcano and a small group of 18 men were actually the only members of the expedition to make the full circumnavigation.

In 1577, Elizabeth I sent Francis Drake to start an expedition against the Spanish along the Pacific coast of the Americas. Drake set out from Plymouth, England in November 1577, aboard Pelican, which Drake renamed Golden Hind mid-voyage. In September 1578, he passed through the southern tip of South America, named Drake Passage, which connects the southwestern part of the Atlantic Ocean with the southeastern part of the Pacific Ocean. In June 1579, Drake landed somewhere north of Spain's northern-most claim in Alta California, which is known as Drakes Bay, California. Drake completed the second circumnavigation of the world in September 1580, becoming the first commander to lead an entire circumnavigation.