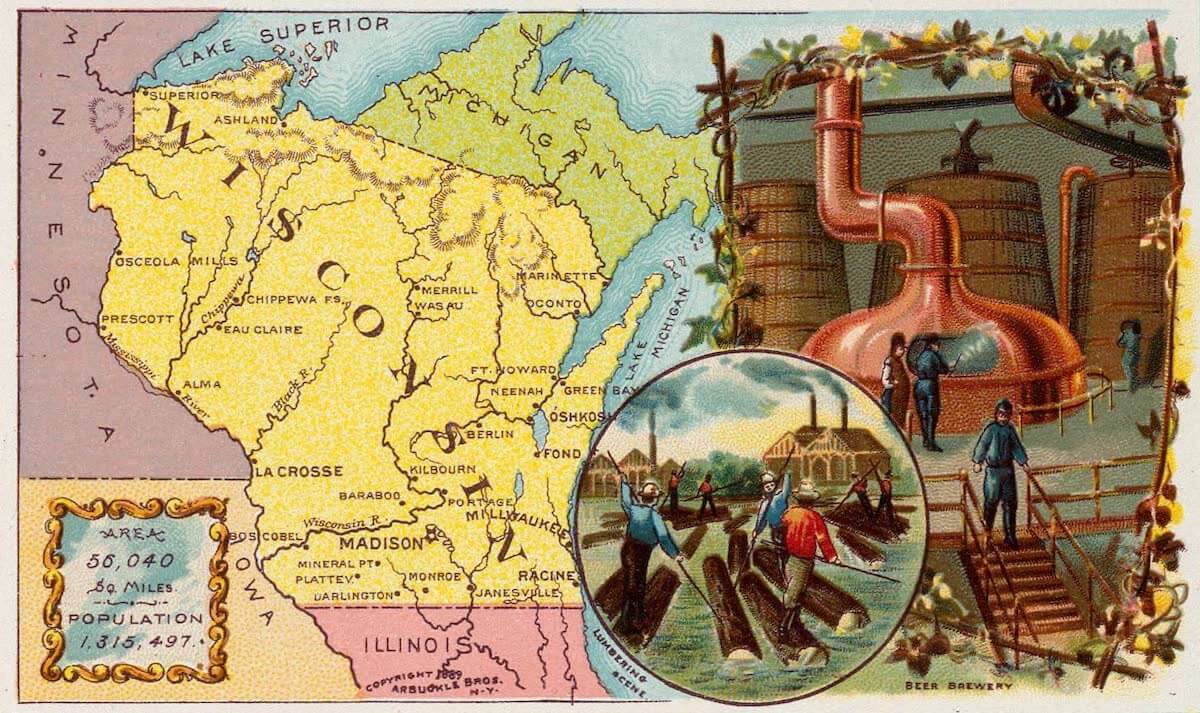 Wisconsin is a north-central state of the American Union, whose area, including Apostle Islands at the western end of Lake Superior and the islands at the mouth of Green Bay in Lake Michigan, is 56,040 square miles, its length being 300 miles, while its greatest breadth is 290 miles. It is bounded on the east by Lake Michigan, on the south by Illinois, on the north by Lake Superior and upper Michigan and on the west by Minnesota and Iowa, the greater part of the latter boundary being formed by the Mississippi River.

From an early period the region was the theater of mission work undertaken by French-Canadian priests and of the discoveries of gentlemen-explorers from New France, as well as the fur-trading and trapping ground of French-Canadian coureurs des bois. They came thither from Quebec by way of Ottawa River, Lake Nipissing, Rainy River and the Great Lakes, thence via Sault Ste. Marie to Marquette and Duluth on Lake Superior or via St. Ignace to Green Bay on Lake Michigan.

These expeditions date as far back as the era of Champlain, governor of New France in 1633-5, and among them numbered Nicolet, the first white man, it is believed, to visit Green Bay, and the fur traders, Radisson and Groseilliers, supposed to have discovered the upper Mississippi in 1659. In 1665 Father Allouez established missions at La Pointe and on Fox River; he was followed about 1673 by the explorers Louis Joliet and Pére Marquette, the latter proceeding by canoe south from Green Bay as far as the site of Chicago. Du Luth is another adventurer of the time, his name being perpetuated in that of the city of Duluth; after him came Charles De Langlade, who took part in the French and Indian War of his era and allied himself with the British in the War of the Revolution.

In the War of 1812 the French, associated with the Indians, took the British side in the struggle and even made a raid on Prairie du Chien on the Mississippi, capturing its American garrison. Meanwhile the fur-trade was being prosecuted, and immigration slowly began to enter. For the protection of the newcomers and to assist the national authority forts began to be built and garrisoned, especially Fort Howard on Green Bay and one at Prairie Du Chien. Internal development followed, particularly after the discovery of the lead-mines at Potosi and Mineral Point, though the country was periodically disturbed by trouble with the Indians of the region — Sacs, Foxes, Sioux, Chippewas and Winnebagos.

An incident in the disaffected condition of the native tribes was the Black Hawk War of 1832, which was presently put down, while the Indians were removed to and protected on new reservations. About the close of the 18th century efforts were made to organize the region as a territory, though it passed through many vicissitudes, being at first part of the Northwest Territory, subsequently oscillating in its attachment to Indiana, to Michigan and to Illinois and then back to Michigan again. Finally in 1836, on the admission of Michigan as a state, Wisconsin, with parts of Iowa, Minnesota and the Dakotas, was erected into a territory, Belmont and Burlington successively being the capital.

For 12 years it remained a territory, being shorn meanwhile of parts of its assigned limits; in May, 1848, however, it was admitted into the Union under its first constitution, Madison becoming the capital. About this period, owing to the revolutionary upheaval in Europe, the state received large additions of Germans to its population, while later it took a helpful and patriotic part in the Civil War, furnishing a total contingent of over 90,000 men. The state in 1871, 1894 and 1908 suffered from destructive forest-fires. Its local legislature consists of a senate of 33 members, elected every fourth year, and an assembly of 100 members, returned biennally. It sends 11 representatives to the lower house of Congress. Its executive officers are elected for two years each. The judicial power is vested in seven supreme-court and 18 circuit-court justices.

Surface and Climate. Wisconsin consists, in the main, of a level or gently undulating plain, sloping slightly on either side of a height of land (1,500 feet in elevation) and running southward about the middle of the state; while in its northern section there is a line of low-lying hills, the Penokee Range, stretching parallel with Lake Superior and about 30 miles south of it, thence trending northeastward into the northwestern peninsula of Michigan and cutting off the northeastern corner of Wisconsin from Lake Superior.

The chief drainage on the west and northwest is by St., Croix, Stillwater, Chippewa, Black and Wisconsin Rivers into the Mississippi: the Menominee, Oconto and Fox (the latter draining Lake Winnebago) fall into Green Bay; and Milwaukee River into Lake Michigan. Rock and Desplaines Rivers flow south into Illinois. Wisconsin has a continental climate, with a rather long and severe winter, though the extreme heat of summer is tempered by the influences of the lakes on its northern and eastern flanks. While there is considerable forest, the cultivated region is large and the land fertile, most of the surface being covered by the clay gravel, marl and sand of the glacial drift, with a fairly deep layer of rich vegetable-mould.

Manufactures. The state's development as a manufacturing one is creditable to the enterprise and industrial activities of its people. There is room for increase, if we may judge from the volume of capital invested (in 1909 this was $605,657,000), which places Wisconsin in the eighth rank among manufacturing states. In 1909 the wage-earners numbered 82,583, and the amount paid them was $93,905,000, while the value of the products was $90,306,000. Lack of coal is a drawback to industries; but in spite of this lack the extent, variety and value of its manufactured commodities are phenomenal.

This is explained in part by large natural resources of timber, agricultural, cattle and dairy-products, its great wool-clip and the mineral ores, in addition to extensive water-power and general manufacturing facilities, with the aid given by financial wealth and banking resources and the further aid afforded by its transportation facilities, both by land and by water. Foundry and machine products in 1909 were worth $34,124,000, while of like value were the gross flour and grist-mill products and the yield from the manufacture and sale of malt liquors.

The yield from leather, tanned, curried and finished, was close upon $44,668,000; while the trade in cattle-slaughtering and meat-packing yielded over $27,217,000; planing-mill products had a gross return of over 11 millions. Even tobacco was grown to the extent of 31,710,000 pounds in 1910. Agricultural implements in 1909 netted in excess of 11 millions; carriages and wagons 9 millions; men's clothing 9½ millions; boots and shoes 13½ millions; printing and publishing 11½ millions; paper and wood-pulp nearly 26 millions; and railroad construction material and repairing netted 14 millions of dollars.

Commerce and Transportation. Banking facilities have helpfully increased in the past few years; while the gross deposits show the prosperity and thrift of the people. In 1911 Wisconsin had 128 national and 517 state banks. The former had over 17 million dollars of capital, and the latter an excess of 13 millions; while the aggregate deposits in the national institutions were close upon 123 millions, and in the state banks close upon 120 millions There also were a large number of private banks and nine or ten loan and trust companies, each with considerable deposits.

The total railway mileage on June 30, 1910, was 7,475 miles, distributed among the following chief lines: the Chicago, Milwaukee and St. Paul; Chicago, Burlington and Quincy; Chicago and Northwestern; Great Northern; Minnesota, St. Paul and Sault Ste. Marie; Illinois Central; Wisconsin Central; Northern Pacific; and Duluth, South Shore and Atlantic (Canadian Pacific) railroads. Besides these facilities are those by steam-vessels on Lakes Michigan and Superior, in addition to the transportation via the Mississippi, Wisconsin, Fox and Chippewa Rivers, not to speak of the canal connections between Portage and Fox River. The assessed valuation of property in 1910 was $2,941,412,842. The state's debt, incurred mainly during the Civil War, amounted to 2¼ millions; and its expenditure was about a like sum.

Education. Wisconsin is far-sighted enough to see the advantage of dealing liberally with education. In 1912 its expenditure for public schools amounted to $13,292,068, including the amount appropriated for the maintenance of the state's normal and the counties' training-schools for teachers. Out of a school-population of 780,008 in 1910 the enrolled numbered 460,470 and the daily average attendance was about 351,830. The number of teachers was then 14,729, the most of whom were women. There were about 300 free high schools, with a gross enrollment of 34,800.

There are no works available for the Wisconsin collection.