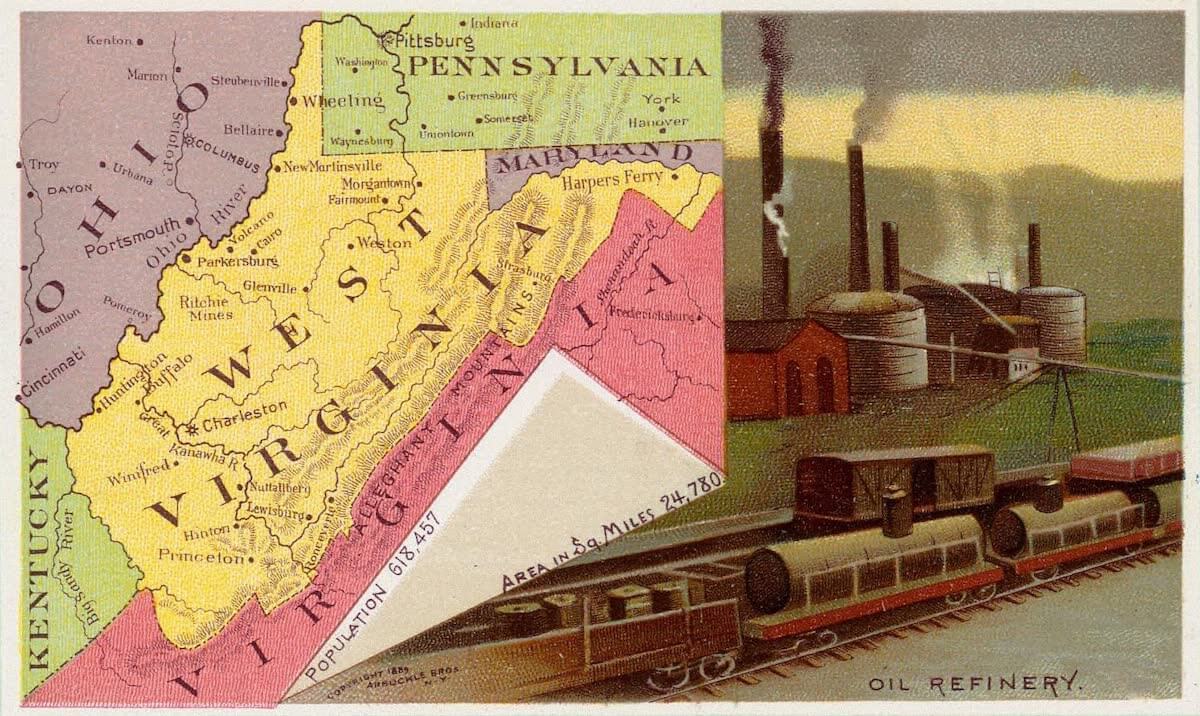 West Virginia, one of the central states of the Union, lies mostly between Virginia and Ohio River, with the narrow strip, called the Panhandle, running for 60 miles between Ohio and Pennsylvania. The first permanent settlers in West Virginia came from east of the Alleghanies, and one of the first landowners was George Washington, who held 32,000 acres in the Ohio and Kanawha valleys.

When Virginia seceded, the western part, separated from the eastern part by the Alleghany Mountains and closely connected with Ohio, refused to join the movement, held conventions at Clarksburg and Wheeling, and formed West Virginia, which was admitted into the Union in 1863. John Brown's raid on Harper's Ferry and the battles of Philippi, Beverly, Rich Mountain, Cheat Mountain and Carnifex Ferry were the chief actions on the soil of West Virginia connected with the Civil War. The chief city is Wheeling (population 41,641). The population of the state is 1,221,119.

Area and Surface. It covers 24,645 square miles, nearly all of it being mountainous or hilly, which has given it the name of the Switzerland of America. The Alleghany Mountains are on the eastern border, and in the western part of the state are Laurel Hill, Greenbrier, Gauley and Rich Mountains, a continuation of the Cumberland range. The Potomac forms 100 miles of the northern boundary and the Ohio 300 miles of the western border, with the Monongahela, Great and Little Kanawhas and the Big Sandy flowing into it. The Kanawha is 450 miles long and is navigable for 100 miles. Nearly all the lower hill-country can be cultivated, and in the mountainous regions are broad, fertile valleys.

Resources. There still are a few large tracts of timber, though these are rapidly disappearing by reason of the extensive production of lumber and numerous woodworking industries. The coal-fields cover 16,000 square miles, a larger extent of country than Great Britain's and give the state the fourth place in the coal-states, while it is second in producing coal and coke. Petroleum, natural gas, iron-ore, salt, bromine, sandstone, marble, alum and copper are other minerals found very abundantly.

The mineral springs, as Greenbrier, White Sulphur Springs (used by the Shawnee Indians and early white settlers), Berkeley Springs, Red Sulphur Springs, Old Sweet and Capon Springs, are famous summer-resorts. Corn is the largest crop, followed by wheat, oats and tobacco. The raising of horses, sheep and cattle is a large industry; the great lumber business, with tanneries and wood-pulp mills in connection with it, and coal-mining are other industries. The manufactures are those of leather, iron, steel, glass and pottery.

Education. There are 6,674 school-buildings in the state. The elementary schools have 8,782 teachers and an enrollment of 276,258 pupils. The per capita expenditure for their education is $23.92. The state supports a university with 14 different schools and colleges, six normal schools, two preparatory schools for the state's university, a school for the deaf and the blind, a reform school for boys and an industrial school for girls. There are about 30 colleges and academies under church and private control. The most important are Bethany College, founded by Alexander Campbell, organizer of the Disciples of Christ; West Virginia Wesleyan College, a coeducational institution founded by West Virginia Conference of the Methodist Episcopal Church; Morris-Harvey College, founded by the Methodist Episcopal Church South; and Davis and Elkins College, an institution under the control of Winchester Presbytery of the Presbyterian Church South.