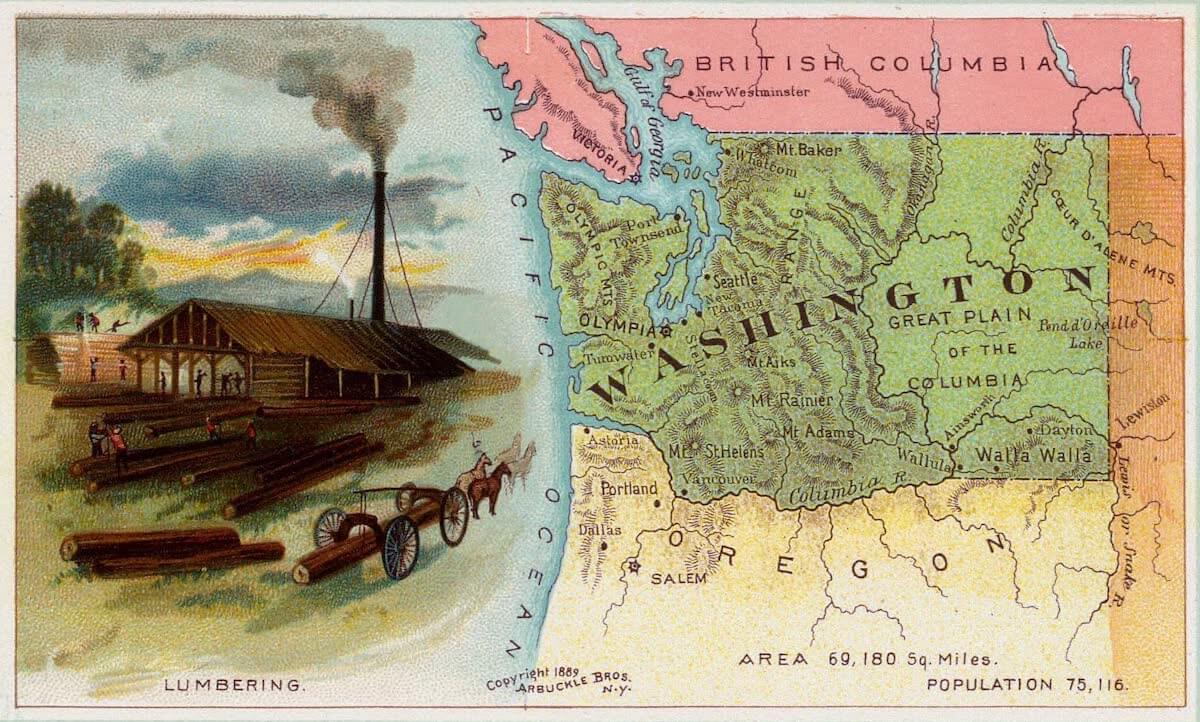 Washington, the extreme northwestern state of the Union, abutting on the Pacific. The Columbia River, in the main, marks its southern boundary and separates it from Oregon. Its boundary on the west is the Pacific, on the east Idaho and on the north British Columbia, the Strait of Juan de Fuca separating it from Vancouver Island, a part of British Columbia. The Cascade Mountains traverse the state from north to south and extend southward into Oregon. The area of the state is 69,180 square miles, its length being 230 miles and its extreme breadth 340. The population (census 1910) was 1,141,990. Its capital is Olympia. The larger cities are Seattle (population 237,194), Tacoma (83,743), Spokane (104,402) and Walla Walla (19,364).

The early history of the region is marked first by conflicts between Spain and Great Britain and later by difficulties between England and the United States. These disputes occurred as the result of early exploration and the successive operations of the fur-traders. As far back as the 16th century the Oregon region was visited by Sir Francis Drake, while a Greek mariner in the Spanish service is credited with having discovered and named the Strait of Juan de Fuca. Captain Gray of Boston discovered and entered Columbia River in 1792.

George Vancouver, the English navigator who gave his name to Vancouver Island and Vancouver City, was another explorer of the region about 1791-2. He was preceded by Captain Cook, who in 1778 discovered Nootka Sound, the deep inlet in Vancouver Island; while at the close of the 18th century Captain Vancouver penetrated Puget Sound and disclosed its ramification of bays and harbors. Later came the fur-traders, and among them Jacob Astor, who in 1811 founded Astoria on the southern bank of the Columbia near its outlet.

This post was captured in the War of 1812 by the British and renamed Fort George, though five years later it was restored and supplanted by Fort Vancouver, founded in 1824-5. In 1804-6 the Lewis and Clark expedition explored the region, and upon this expedition and its explorations, together with the purchase from France of the Louisiana Territory as well as upon Gray's discovery, rests the American claim to the region, including the great waterway of the Columbia.

Settlement at first progressed slowly, immigration not coming until the thirties, when Walla Walla was founded, followed ten years later by settlement about Puget Sound. About this period Oregon organized a territorial government which included Washington and part of Idaho; but in 1853 Washington was formed into a territory with a government of its own; this continued till 1889, when the territory was admitted as a state. Before 1840 boundary differences became acute on several occasions, increased by the clamor of gold-seekers who sought to know to which nation—Britain or the United States—they owed allegiance.

The matter was a vexatious one, as both countries from 1827-8 had jointly occupied the region, the British seeking ownership as far south as the mouth of the Columbia and Russia agreeing not to encroach southward below 54° 40'. About 1844 the difficulty almost precipitated war between England and the United States, for the Democratic rallying-cry of the era was "Fifty-four forty, or fight!" In 1846 the boundary agreed upon by the Webster-Ashburton treaty was 49° N., the separating line being the channel between Washington and Vancouver Island.

This settlement, as it turned out, was vague, for in 1859 "the question arose as to whether the channel gave the United States possession of Haro Archipelago and San Juan Island. The contention being submitted for arbitration to Germany, its emperor in 1872 decided in favor of the United States. In 1885-6 there was trouble with the Chinese entering the state, the governor being obliged to call Federal troops to his aid in quelling disturbances at Seattle. Thirty years prior to that the state had to contend against the Indians who troubled both Washington Territory and Oregon.

Surface and Climate. The Cascade Mountains' lofty peaks are striking features. They embrace Mount Baker (10,827 feet), Glacier Peak (10,436) and, farther south, Mt. Rainier or Tacoma (14,363), Mt. Adams (12,470) and Mt. St. Helens (10,000). In the northeast, between Puget Sound and the Pacific, is the coastal range known as the Olympic Mountains, the highest peak of which is Mt. Olympus. In the southeast are the Blue Mountains, while in the northeast there are several ranges of the Rockies. Bordering on the Chelan range is oblong-shaped Chelan Lake; west of the range and extending southward from the Strait of Juan de Fuca is the extensive basin of Puget Sound, with its variedly ramifying arms. Besides the Columbia the chief rivers are the Snake, its most important tributary, entering it from the east, the Okanagan, the Yakima, the Pend' Oreille, the Spokane, the Chehalis, Skagit, Nesqually and other streams. The coastal inlets, besides that of the Columbia River and Puget Sound, are Gray's and Wallapi Harbors. The climate varies greatly, the region west of the Cascade Range being much more humid and, on the whole, warmer and more equable under the tempering influence of the ocean; while in the east the rainfall is barely normal and less favorable for agriculture, and the soil for the most part is infertile, with underlying rock and lava-covered surface. The east, moreover, is treeless in parts, though there is much yellow and white pine, while the west has magnificent forests, in which occur gigantic conifers, cedar, spruce and hemlock.

Natural Resources. The lumber industry leads all others in the annual value of its products. In 1909 the number of establishments turning out timber and planing-mill products was close upon 1,265, with an output valued at over 89 million dollars, while the number of wage-earners engaged in the trade exceeded 43,000. To conserve and promote the industry, the Federal government has established five forest reserves aggregating over seven million acres. Agriculture also does well, despite the large mountainous areas. Of the yield from the cereals wheat has by far the best showing; the yield in 1910 was 25,603,000 bushels, while the product of oats was 8,817,000 bushels. The barley and the hay crop are also large, while fruit-culture, especially apples, plums and prunes, is a profitable and growing industry. Stock-raising is an important industry. In 1910 the state had 475,555 sheep, 215,887 cattle, besides 186,233 dairy-cows, 280,572 horses and 206,135 swine. The fisheries also are an important industry, the amount invested in the trade in 1905 being over seven and a half millions. The annual catch of salmon is especially large, and the fish-canning industry is very important. Coal yields largely, the output in 1909, including lignite as well as bituminous coking-coal, being 3,602,263 short tons. Of quarried building-stone, embracing granite and limestone, as well as the clay products of brick and tile, the state had about $3,000,000 in value. Gold, silver, copper, iron and lead also are among its products.

Manufactures. With the advantages the state has in coal, extensive water-power and good facilities of transportation, Washington's growth in manufacturing industries is to be looked for. Already it has over 222 million dollars invested in manufactures, while the value of the products of all kinds in 1909 was close upon 220 millions. The number of wage-earners was 69,120, wages amounting to nearly 50 million dollars. Among the chief manufactures are those of the timber and lumber mills, of flour and grist mills and of fishing, curing and canning establishments. Fish-canning nets annually close upon five million dollars, while the flour and grist mill receipts in 1905 were nearly seven million. Besides, there are the factory product in cheese, butter and condensed milk and the product of the slaughter-houses and meat-packing establishments.

Commerce and Transportation. With such facilities in the furthering of oceanic trade from the Puget-Sound Ports of Seattle and Port Townsend, as well as from those in the Columbia River, commerce is bound steadily and largely to increase. Already Washington has a large oriental and Pacific trade from Seattle and Port Townsend. The railway mileage in 1906 was 3,313 miles, the chief lines being the Northern Pacific and the Great Northern, while it is connected at Seattle with the Canadian Pacific. There are five other railroads, and the Milwaukee, North Coast and Union Pacific railroads are building into the state. Large steamers reach Vancouver on the Columbia, while there is a large inland navigation, of smaller steamers, on that river, as also on Snake River. The assessed valuation of the state had in 1905 grown to nearly 310 millions.

Education. The public schools are under a board of education, with a state superintendent of public instruction. The schools' population in 1911 exceeded 276,000, the enrollment being 220,461 and the daily average attendance about 163,000. The teachers numbered about 7,600, four fifths of whom were women; and the total expenditure for school maintenance amounted to over four and one third million dollars. Agricultural colleges are maintained by the state at Pullman and Seattle, and at the latter is the University of Washington, with 106 instructors and 2,358 students. The other higher seats of learning are Whitman College (undenominational) at Walla Walla, with 40 instructors and 494 students; Whitworth College (Presbyterian), Tacoma, with 19 instructors and 144 students; the University of Puget Sound (M. E.) at Tacoma; and Gonzaga (R. C.) College at Spokane. State normal schools are in operation at Cheney and Ellensbury; at Chehalis there is a reform school; at Vancouver a school for defective youth; at Orting a soldier's home; and at Walla Walla a state penitentiary.

There are no works available for the Washington collection.