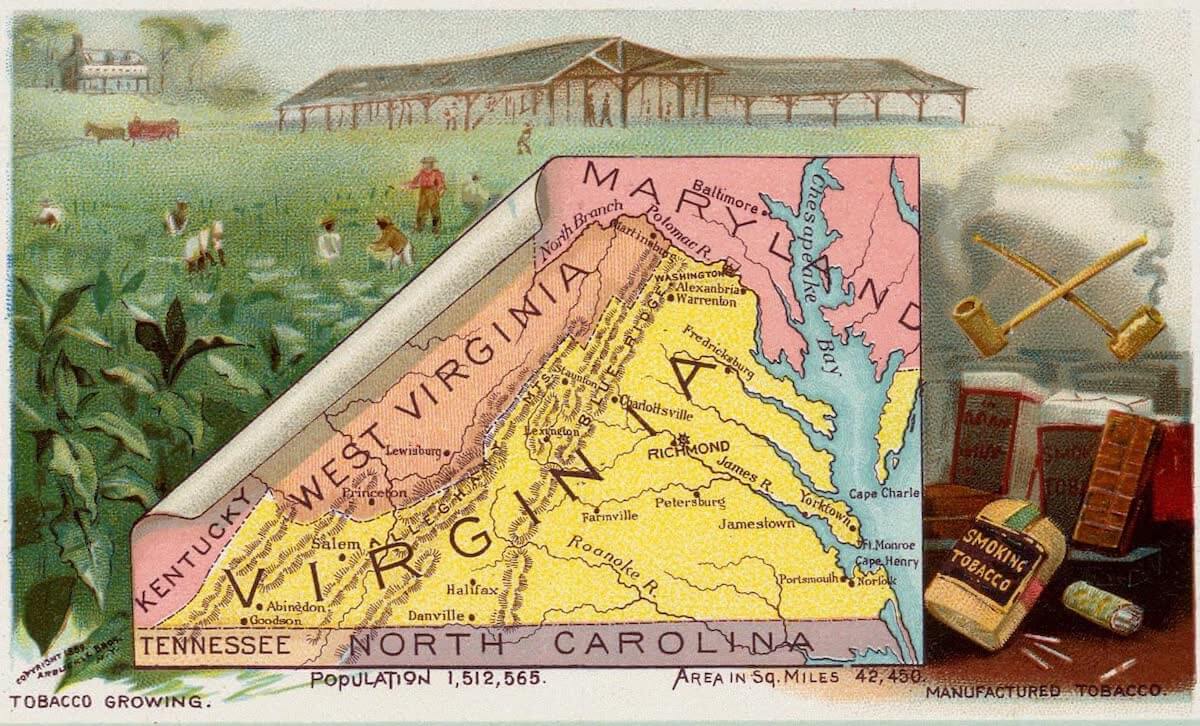 Virginia is one of the thirteen original states of the Union. It is a rough triangle in shape, with its broad base resting on North Carolina and Tennessee, running along Kentucky and West Virginia on its western side, and having Maryland and the Atlantic Ocean on the eastern side. Its longest line from east to west is 476 miles and from north to south 192 miles; the whole area being 40,125 square miles.

The whole country from Cape Fear to Halifax, Nova Scotia, was first named Virginia, in honor of Queen Elizabeth (the Virgin queen), after its discovery by Raleigh. The first permanent English settlement in America was made at Jamestown on May 13, 1607. The London Company, under whom the colonists had been sent out, by charter from James I held the land for 400 miles along the coast and 400 miles back into the interior and all islands within 100 miles of the coast. In 1619 negro slavery was brought into the United States by the sale of 20 slaves brought to Jamestown in a Dutch man-of-war.

In 1754 Virginia established a fort at Pittsburgh on the Ohio, which was taken by the French, and the French and Indian War followed, ending in the treaty of 1763, which left the Mississippi as Virginia's western boundary. In 1784 the state ceded all the land beyond the Ohio to the United States on condition that slavery be prohibited in the new states formed out of the territory.

In the War of Independence and in that of 1812 Virginia was prominent, giving the head to the Revolutionary army and also the first president to the new republic in the person of Washington, whose home, Mt. Vernon, on the Potomac, has been presented to the nation. In the Civil War Virginia at first refused to secede, but later joined the southern confederacy, losing thereby the western part of the state, which refused to secede.

The state suffered more than any other in the Union, being the most important battleground of the country, on which were fought some of the most destructive contests of the war, which ended on the soil of Virginia at Appomatox Court House, as had that of the Revolution by the surrender of Cornwallis at Yorktown. The chief cities of Virginia are the capital, Richmond (population 127,628) and Norfolk (67,452). Population of the state 2,061,612.

Surface. It has a hilly region and a region of lowlands, as the southeastern part is a broad, undulating plain, nowhere rising more than 800 feet, while the northwestern part has parallel mountain ranges, reaching 5,700 feet in their highest points, with valleys between. The region next the Atlantic on Chesapeake Bay, called Tidewater Virginia, is divided into five great peninsulas, with hundreds of smaller ones, giving a coast of nearly 2,000 miles.

This region, going inland 100 miles, only rises from 12 to 100 feet above the sea. Midland Virginia and Piedmont are two of the six steps by which Virginia rises gradually from the seashore to the Appalachian Mountains and reaches to the fourth rise, the Blue Ridge country, which is diversified by the two portions of the range and the fine tablelands, at heights varying from 916 to 5,700 feet. The valley of Virginia, the next step, 300 miles long, is a part of the great Appalachian valley stretching from Canada to Alabama, and lies between the Blue Ridge and the Kittatinny or North Mountains.

With its broad valleys, its mountain chains and rivers it forms one of the finest regions in the United States. The Appalachian region has high mountains and deep, trough-like valleys, and forms the grazing and timber region of the state, while beyond lies the Virginian portion of the tableland stretching westward from the Alleghanies, which is the coal-region. The highest peak in Virginia is Mt. Balsam (5,700 feet) on the border of North Carolina.

Drainage. The Potomac, Rappahannock, York and James, with their tributaries, flow into the Atlantic through Chesapeake Bay. The Great Kanawha flows into the Ohio, and other small rivers into the Tennessee. The climate is as varied as the country and its resources. The state is noted for its clear skies, pure air and freedom from great storms.

Natural Resources. Virginia has great forests of balsam, pine and other trees, which are being rapidly exhausted. It also has valuable fisheries, especially of oysters, and the mineral wealth is considerable, but as yet not extensively developed. The output, however, is valuable. Among the varieties worked are marble, granite, sandstone, limestone, slate, coal, iron, talc, soapstone, titanium, gold, silver, lead, zinc and copper. There are some gold-mines in the belt which extends from Washington to Halifax Court House, 200 miles long and from 15 to 25 wide, and the manganese mines are the largest in the world. Salt is obtained from artesian wells, which reach a solid bed of salt. There are many mineral springs, some of which, notably the White Sulphur, have long been popular as summer resorts. The Natural Bridge, with a span of 80 feet, 215 feet high and 100 feet wide, is one of the remarkable natural arches of the world. The caverns of Luray, Weyer's cave and Madison cave, the Crabtree falls, descending 2,000 feet, and the Dismal swamp, covering 150,000 acres, are among the scenic features.

Agriculture. The cultivation of early vegetables and small fruits for northern markets is among the profitable employments. Corn and tobacco are grown in all portions of the state, and wheat, oats, hay, buckwheat, rye and barley are also produced in large quantities. Peanuts are the leading crop in the low, coastal region, orchards and vineyards in the middle regions, and in the higher portions are the pasture-lands and cattle-farms. The live-stock industry brings more money to the farmers than does tobacco, and the dairy-products but little less. The value of the poultry and eggs almost equals that of the dairy-products. Only a small portion of the state is devoted to cotton-raising. Sumac-leaves and oil of sassafras are peculiarly Virginian products.

Education. The school-system dates from 1870, and costs $4,450,000 annually. In 1910 there were 10,082 schools, the elementary ones having 386,775 pupils and the high schools 15,334 students, the total number of teachers in both being 10,443, besides seven colleges. There are five public normals and one private normal. The College of William and Mary, now used as a state normal school, for more than a century was one of the principal southern colleges and stands next to Harvard in age, being the second college founded in the United States. The University of Virginia, near Charlottesville, owes its existence mainly to Jefferson. The old buildings were designed by him. It has a museum of natural history, a Gothic chapel, an experimental farm and an observatory with one of the largest telescopes in the world. Washington and Lee University, first named Washington College in honor of Washington, who endowed it with property given him by the state, after being presided over for five years by Robert E. Lee received its present name from the legislature. Hampden-Sidney College, Emory and Henry College, Randolph-Macon College (for men, at Ashland; for women, at Lynchburg); Roanoke College, Virginia Military Institute, Virginia Agricultural College, with the United States experiment station, and St. John's Theological Seminary are other institutions of higher learning. There are theological seminaries for white students at Richmond and Alexandria and for colored students at Richmond, Lynchburg and Petersburg. The University of Virginia has a medical department, and there are two other medical colleges. For the higher education of the negro there are Hampton Normal and Agricultural Institute at Hampton, Hartshorn Memorial College (female), Virginia Union University at Richmond and Virginia Normal and Industrial Institute at Petersburg. This is supported by the state. Separate schools are maintained for the white and the colored race, and no child under 12 can be employed in any mining or manufacturing work.

Institutions. There are national cemeteries at Arlington, Ball's Bluff, Culpeper, Fredericksburg and Richmond; a navy-yard and naval hospital at Gosport; an artillery school at Fortress Monroe; and a home for disabled volunteers at Hampton. There are charitable institutions for the aged and orphans at Richmond, a state school for the deaf, dumb and blind at Staunton, insane asylums (for whites) at Williamsburg, Marion and Staunton, with one for colored at Petersburg. There are a soldiers' home at Richmond, an industrial school for boys at Laurel and a state penitentiary at Richmond.