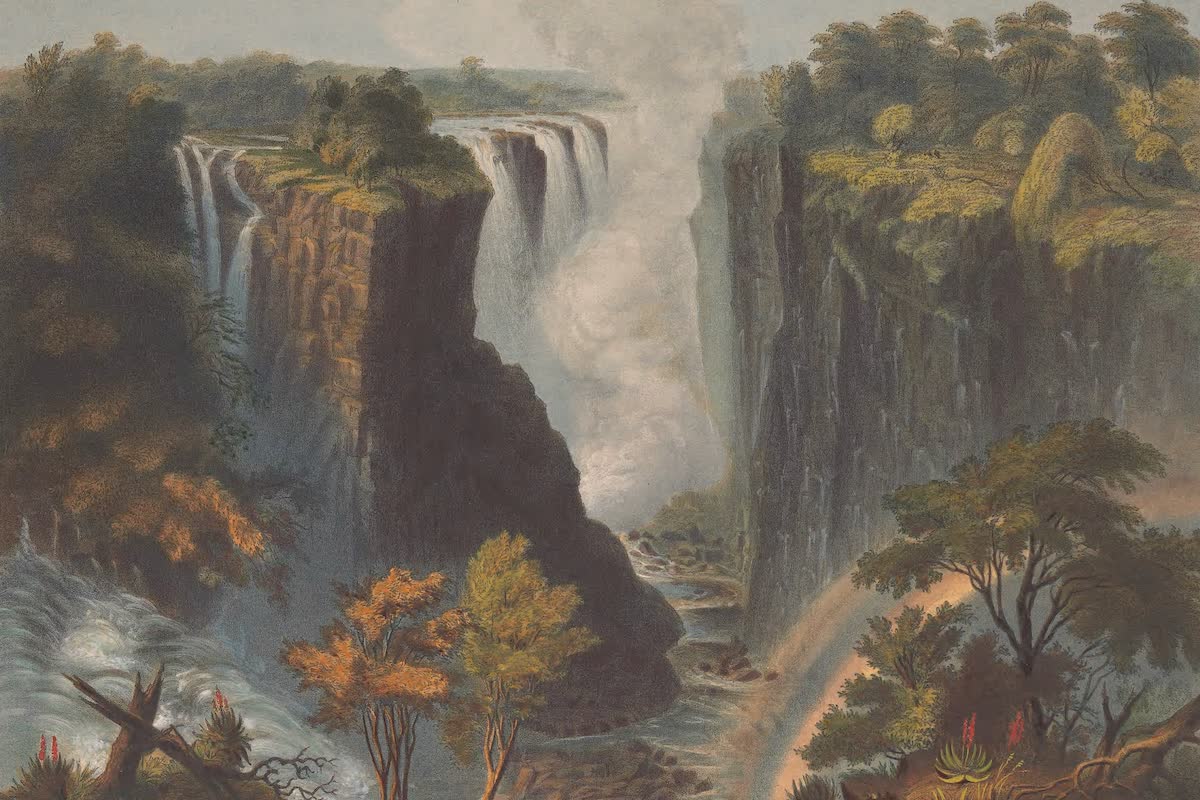 Victoria Falls is one of the greatest waterfall in the world, forming the most remarkable feature of the river Zambezi, Central Africa. The falls are about midway in the course of the Zambezi in 17° 51? S., 25° 41? E. For a considerable distance above the falls the river flows over a level sheet of basalt, its valley bounded by low and distant sandstone hills. Its clear blue waters are dotted with numerous tree-clad islands. These islands increase in number as the river, without quickening its current, approaches the falls, whose nearness is indicated only by a veil of spray.

At the spot where the Zambezi is at its widest—over 1860 yds.—it falls abruptly over the edge of an almost vertical chasm with a roar as of continuous thunder, sending up vast columns of vapour. Hence the native name Musi-oa-tunya, “Smoke does sound there,” The chasm extends the whole breadth of the river and is more than twice the depth of Niagara, varying from 256 ft. at the right bank to 343 ft. in the centre.

Unlike Niagara the water does not fall into an open basin but is arrested at a distance of from 80 to 240 ft. by the opposite wall of the chasm Both walls are of the same height, so that the falls appear to be formed by a huge crack in the bed of the river The only outlet is a narrow channel cut in the barrier wall at a point about three fifths from the western end of the chasm, and through this gorge, not more than 100 ft wide, the whole volume of the river pours for 130 yds. before emerging into an enormous zigzag trough (the Grand Cañon) which conducts the river past the basalt plateau. The tremendous pressure to which the water is subjected in the confinement of the chasm causes the perpetual columns of mist which rise over the precipice.

The fall is broken by islands on the lip of the precipice into four parts. Close to the right bank is a sloping cataract 36 yds. wide, called the Leaping Water, then beyond Boaruka Island, about 300 yds. wide, is the Main Fall, 473 yds. broad, and divided by Livingstone Island from the Rainbow Fall 535 yds. wide. At both these falls the rock is sharp cut and the river maintains its level to the edge of the precipice. At the left bank of the river is the Eastern Cataract, a millrace resembling the Leaping Water. From opposite the western end of the falls to Danger Point, which overlooks the entrance of the gorge, the escarpment of the chasm is covered with great trees known as the Rain Forest, looking across the gorge the eastern part of the wall (the Knife Edge) is less densely wooded.

At the end of the gorge the river has hollowed out a deep pool, named the Boiling Pot. It is some 500 ft. across, its surface, smooth at low water, is at flood-time troubled by slow, enormous swirls and heavy boilings. Thence the channel turns sharply westward, beginning the great zigzag mentioned. This grand and gloomy canon is over 40 m. long. Its almost perpendicular walls are over 400 ft. high, the level of the escarpment being that of the lip of the falls. A little below the Boiling Pot, and almost at right angles to the falls, the cañon is spanned by a bridge (completed in April 1905) which forms a link in the Cape to Cairo railway scheme. This bridge, 650 ft. long, with a main arch of 500 ft. span, is slightly below the top of the gorge. The height from low-water level to the rails is 420 ft.

The volume of water borne over the falls varies greatly, the level of the river in the cañon sinking as much as 60 ft. between the full flood of April and the end of the dry season in October. When the river is high the water rolls over the main falls in one great unbroken expanse; at low water (when alone it is possible to look into the grey depths of the great chasm) the falls are broken by crevices in the rock into numerous cascades.

The falls are in the territory of Rhodesia. They were discovered by David Livingstone on the 17th of November 1855, and by him named after Queen Victoria of England. Livingstone approached them from above and gained his first view of the falls from the island on its lip now named after him. In 1860 Livingstone, with Dr (afterwards Sir John) Kirk, made a careful investigation of the falls, but until the opening of the railway from Bulawayo (1905) they were rarely visited. The land in the vicinity of the falls is preserved by the Rhodesian government as a public park.

See Livingstone's Missionary Travels and Researches in South Africa (London, 1857) for the story of the discovery of the falls, and the Popular Account of Dr Livingstone's Expedition to the Zambesi and its Tributaries 1858-1864 (London, 1894) for a fuller description of the falls and a theory as to their origin. How I crossed Africa, by Major Serpa Pinto (English trans., London. 1881), contains a graphic account of the visit paid to the falls by the Portuguese explorer. In the Geographical Journal for January 1905 is an article by A. J. C. Molyneux on “The Physical History of the Victoria Falls.” The article is illustrated by excellent photographs and gives a bibliography. Consult also “The Gorge and Basin of the Zambesi below the Victoria Falls,” by G. W. Lamplugh in the Geog. Jour. (1908), vol. xxxi.