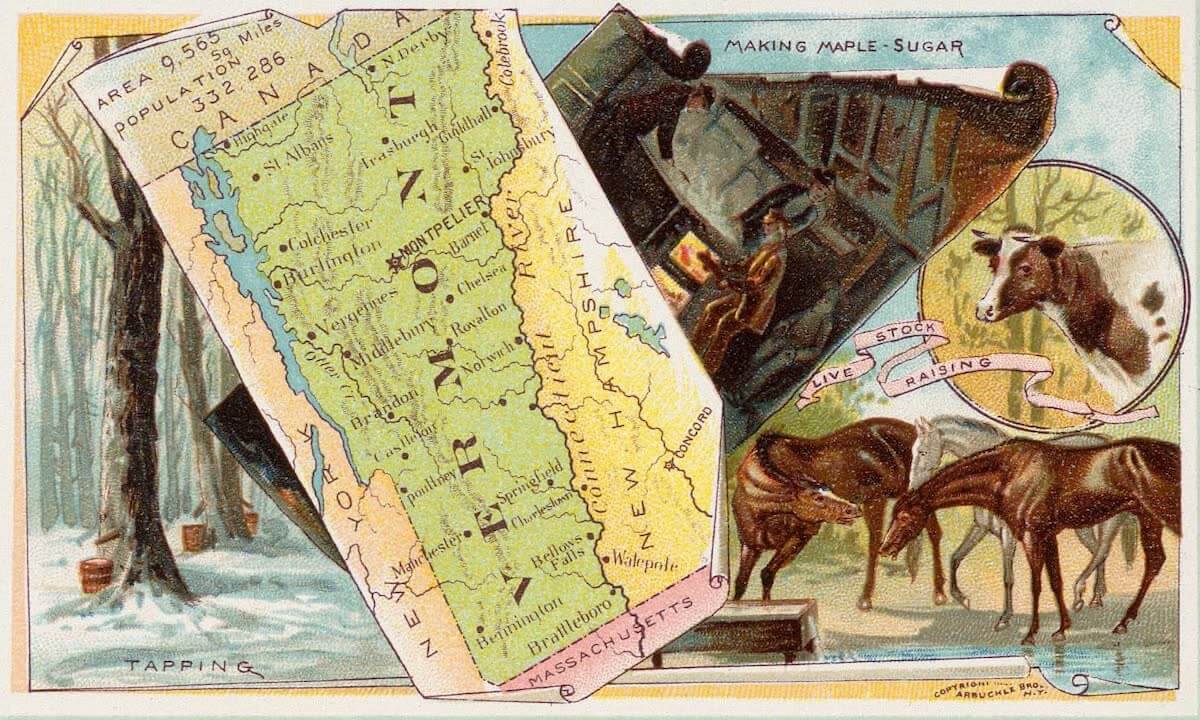 Vermont? (from the French vert mont — green mountain), a North-Atlantic state of the Union, popularly known as the Green Mountain State, has an area of 9,565 square miles. Its length is 155 and its extreme breadth 90 miles; its northern boundary being the Canadian province of Quebec, its eastern one New Hampshire, its southern one Massachusetts and its western one New York.

From Vermont's proximity to the French province of Quebec, the region was in early days explored by the French. Lakes Champlain and George are known to have been visited by Samuel de Champlain in 1609, while on an expedition with a band of Hurons, Montagnais and Algonquins against the Iroquois of the region. At first only trading-posts were established in northern Vermont, including stockades, at what now are Crown Point, Ticonderoga and Colchester, at and about which settlements grew in time, though harassed by the Indians both local and from Canada.

Raids from the latter quarter, however, came to an end after the expedition from Crown Point in 1759, led by Major Robert Rogers, against the Saint Francis Indians, who had long been the scourge of the New England frontier. For many years settlement was at a disadvantage owing to the uncertainty of ownership over the region, it being claimed alike by New Hampshire and by New York a condition of things adverse to the settlers' interests, which forced them to remain aloof from both and even to resist by force the writs and other law-processes especially of the New York courts.

During the period of the Revolution hostility to New York brought the organization of the Green Mountain Boys into existence, under Ethan Allen, to defend their own rights as well as to take part against the British in the war in the Canadian avenues of approach into Vermont. It was at Bennington that Stark of Vermont, assisted by troops from Massachusetts and New Hampshire won the battle on Aug. 16, 1777, that turned the tide against Burgoyne and made possible the great American victory at Saratoga, N.Y.

The interstate disturbances and disaffections were finally removed, when New York in 1790 received $30,000 from Vermont in adjustment of the disputed land-claims, and waived its objection to the admission of the region as a state. In the following year Vermont formally entered the Union, the first state to be admitted under the constitution, having had no previous existence as a territory. During the Civil War the state patriotically did its duty in the extent of the local forces it put in the field.

At their disbandment Canada for a time became the object of lawless raids by Fenians across the border from St. Albans. The present constitution dates from 1793, with repeated, subsequent amendments. The local legislature consists of 30 senators and of 246 representatives, the chief executive, besides the governor and the lieutenant-governor, consisting of a secretary of state, a treasurer and a superintendent of education. The judicial authority consists of a superior court, of seven justices, who are appointed biennially. Vermont sends two members to the Federal House of Representatives.

Surface and Climate. The main feature of the surface is the Green Mountain range, which traverses it northeast and southwest, and forms the watershed. The range has a number of considerably elevated peaks, at a height varying from 4,001 to 4,364 feet, the latter representing the altitude of Mt. Mansfield. The state's general elevation is between 600 and 1,000 feet, though there are low sections in the valleys, about the lakes and along the rivers. It has a long and generally severe winter, with frequent heavy snowfalls, but the winter is bracing, while the summer usually is bright and pleasant.

Natural Resources. Forests, chiefly of spruce and hemlock overspread the state, but in parts there is considerable agricultural land, though the farms are small, as a rule, and generally devoted to dairy interests and the cultivation of hay, oats, barley and corn. The apple is largely cultivated, and the state extensively produces maple-sugar and maple-syrup. The soil for the most part is poor and stony, though on the hill-slopes there is good herbage for the grazing of cattle, sheep and other animals of the farm. The chief cereals raised in 1910 were 3,528,000 bushels of oats; 1,426,000 of corn; and of wheat about 29,000 bushels. Hay usually is a large crop, as are potatoes; while there is only a fair yield of barley and buckwheat. The number of domestic animals on the farms is 80,781 horses, 265,483 dairy-cows, 164,831 other cattle, 118,551 sheep and 94,821 swine. In 1900 the production of lumber was valued at close upon $7,000,000, but it has since declined to the extent of a million dollars. On the other hand, the mining industries have of recent years improved greatly, particularly granite, marble and other building-stone; also the annual yield from slate, brick and tile.

Manufactures. Vermont makes only an indifferent showing in volume of manufactures; New Hampshire annually has almost double its value of industrial products. In 1909 the manufacturing establishments numbered 1,958, with an aggregate capital of $73,470,000. The wages to 33,788 wage-earners amounted to $17,272,000; while the gross value of the products was $68,310,000. The chief industrial centers are Burlington, Barre and Rutland. Marble, granite and stone-work, including the manufacture of monuments and tombstones, in 1909 made returns of close upon $12,395,000; lumber, timber, furniture, paper and wood pulp had a total of $14,118,000; foundry and machine-shop products had a return of $3,755,000; the grist and flour mills showed a return in excess of four millions; dairying, including the trade in cheese, butter and condensed milk, produced $8,112,000; while hosiery, woolen and knit goods yielded some $6,250,000 in gross. The other chief industries embrace roofing-materials, scales, balances and patented medicines.

Commerce and Transportation. Vermont's proximity to the Canadian border causes considerable foreign trade in imports and exports. These, in the main, enter by way of Burlington on Lake Champlain and by Newport on Lake Memphremagog. In 1911 the value of the combined imports and exports at Burlington was close upon $13,500,000, and the value of the trade entering and passing out at Newport was about the same. In the same year the state had 51 national banks, with an aggregate capital of $5,210,000 and total deposits amounting to over $18,000,000. The savings-banks numbered 21, with 110,644 depositors and $44,546,736 of deposits. The assessed valuation of real and personal property in 1911 was about $202,000,000; the revenue was over $1,500,000, while the expenditure was less by some $300,000. The debt is under $136,000. The railway mileage within the state totaled 1,100 miles in 1910, the principal railroads traversing it being the Central Vermont and the Boston and Maine lines, with the Grand Trunk of Canada.

Education. A superintendent of education has charge of the public-school system, which annually costs over $1,550,000, about three fourths of which are paid for teachers' salaries. The school-population in 1910 was over 74,700, the enrollment being in excess of 68,000, while the average daily attendance was close upon 52,100. The state has a permanent school-fund, and employs about 3,300 teachers, chiefly women. For the training of teachers, beyond the attention given them in the advanced classes of the high schools and academies, there are summer-schools and three state normal schools at Randolph, Castleton and Johnson. At Burlington is the university (founded in 1791) of the state, with an agricultural college attached, which receives state aid. Higher education is also represented by Middlebury College, with 23 instructors and 364 students. The latter is nonsectarian, as is also Norwich University at Northfield, which has 15 instructors and 182 students. Moreover, there are an industrial school for children of both sexes at Vergennes and a soldier's Home at Bennington, the latter receiving federal aid. Vermont also has the usual charitable and penal institutions, besides the hospitals, orphanages and similar institutions maintained by private beneficence.

Consult Robinson's Vermont in the American Commonwealth Series and Gilman's Bibliography of Vermont.

There are no works available for the Vermont collection.