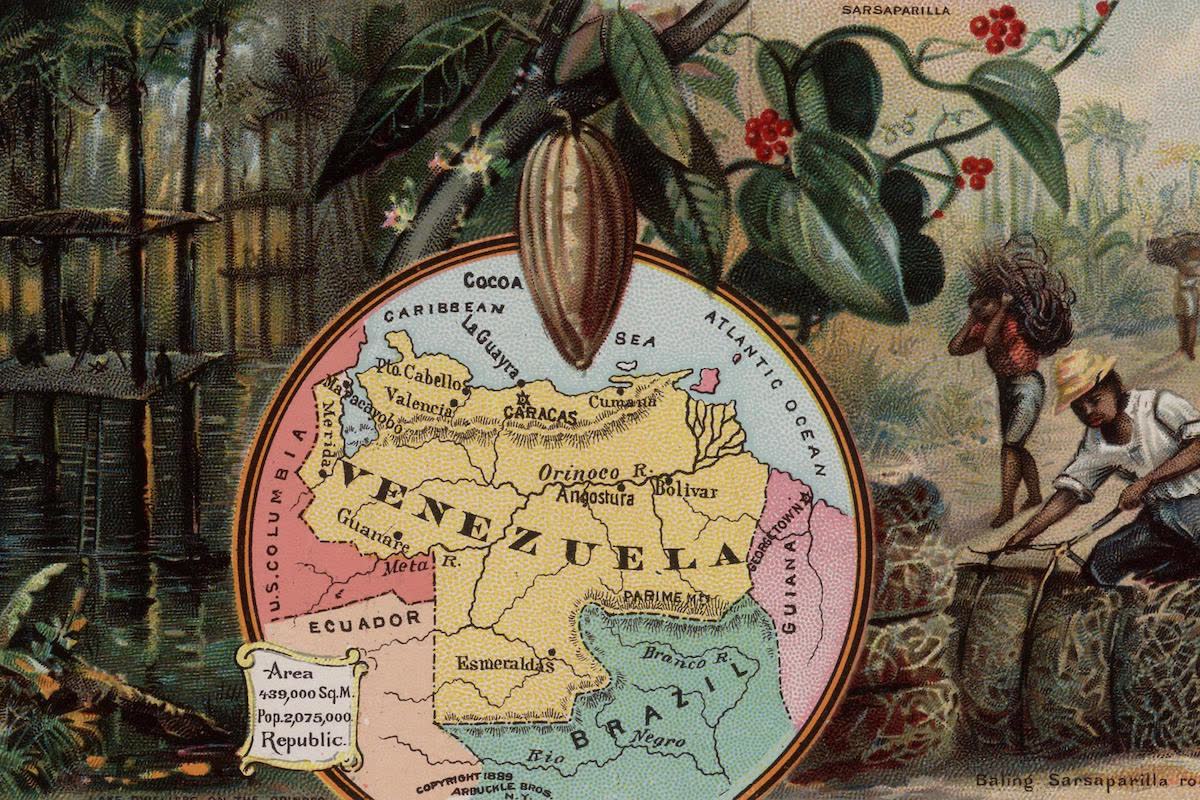 Venezuela ( v?n'?-zw?'l? ) is a republic of South America, lies between the Caribbean, the Atlantic, Guiana, Brazil and Colombia. Area 393,976 square miles, a third more than that of Texas, nearly two times that of France. Capital: Carácas (72,429). Population 2,713,703. Columbus discovered the Orinoco (1498), Ojeda the Maracaibo district (1499), naming it Venezuela or Little Venice from an Indian lake-village.

Settlement occurred in 1520. Venezuela, through Bolivar, initiated Spanish America's revolt (1811), rising that year, uniting with New Granada and Quito (1819) as one republic, but in 1829 becoming a separate state. Comparative quiet obtained till 1846, but 50 revolutions have since occurred, ten succeeding. Emancipation (1854), encouragement of immigration, opening the Orinoco to navigation by all comers (1886), the influx of $50,000,000 of foreign capital and the settlement of the Guiana dispute with Britain by arbitration (1899) have been the significant events of the half century ending with 1911. General J. V. Gomez is the president now. His administration has been peaceful and prosperous, as compared with that of Cipriano Castro, his predecessor.

Geography. Venezuela consists of mountainous lands in the north, 300,000 square miles of plains in the center and vast plateaus in the south, The most important ranges are the Merida, a continuation of the Colombian Andes, and two ridges paralleling the Caribbean and called the Maritime Andes. Between these lies a fertile valley, the densely peopled part of Venezuela. The low plains are grassy, pasturing large herds, the high plains timbered. The tableland along Brazil and Guiana breaks into numerous ridges and peaks, the Parima and Pacaraima ranges. The drainage is an oceanic system, the Orinoco and its tributaries emptying into the Atlantic, the northern streams into the Caribbean. Over 1,000 rivers exist, almost 500 in the Orinocan system. Seventy rivers are navigable for nearly 6,000 miles, and are open to large steamers the year round. The Orinoco belongs wholly to Venezuela. Rising almost in Brazil, circling 1,450 miles, it is navigable below and above its rapids, and, with navigable affluents, affords 4,300 miles of navigation. The Orinoco and Meta form the shortest route from Europe to the Andes. The Casiquiari and Négro, both navigable, link the Orinoco and Amazon, The coast, 1,584 miles long, provides 32 good harbors. The lakes, numbering 200, are of increasing importance to transportation.

Climate and Rainfall. The mountainous districts and lofty valleys have a temperate climate, the coast and Orinoco valley a tropical one. The wet season experiences heavy rains; the dry season is mild and vivifying. Precipitation occurs most heavily on the coasts, mountains and western plains. At Carácas the mean fall annually is 30 inches.

Agriculture. Coffee is the principal crop and the basis of Venezuela's wealth. Cacao and cocoanuts are largely grown. Cotton and sugar are grown, but not so extensively as formerly. Manioc and maize form the chief food-crops. The herds rival those of Argentina.

Commerce and Manufactures. Exports exceed $16,000,000, agricultural productions equaling 87% of the exports and coftee being nine tenths of the contribution by agriculture. Imports, about $9,000,000, include bagging, bags, cottons, flour, machinery, provisions, rice and woolens. Manufactures are limited mainly to cheap clothing, coarse cotton, farm-tools, organs, paper, pianos, spirits and sugar. The railways cover 540 miles, 382 being on the seaboard and connecting the larger cities with their ports.

Education. Legislative enactments (1870) provided well for primary instruction, which was made free and compulsory, but primary schools number only 1,330. Eleven national girls' colleges exist. There are professional and technical schools and two universities. Roman Catholicism is the religion of the people, but tolerance for other religions is professed.

There are no works available for the Venezuela collection.