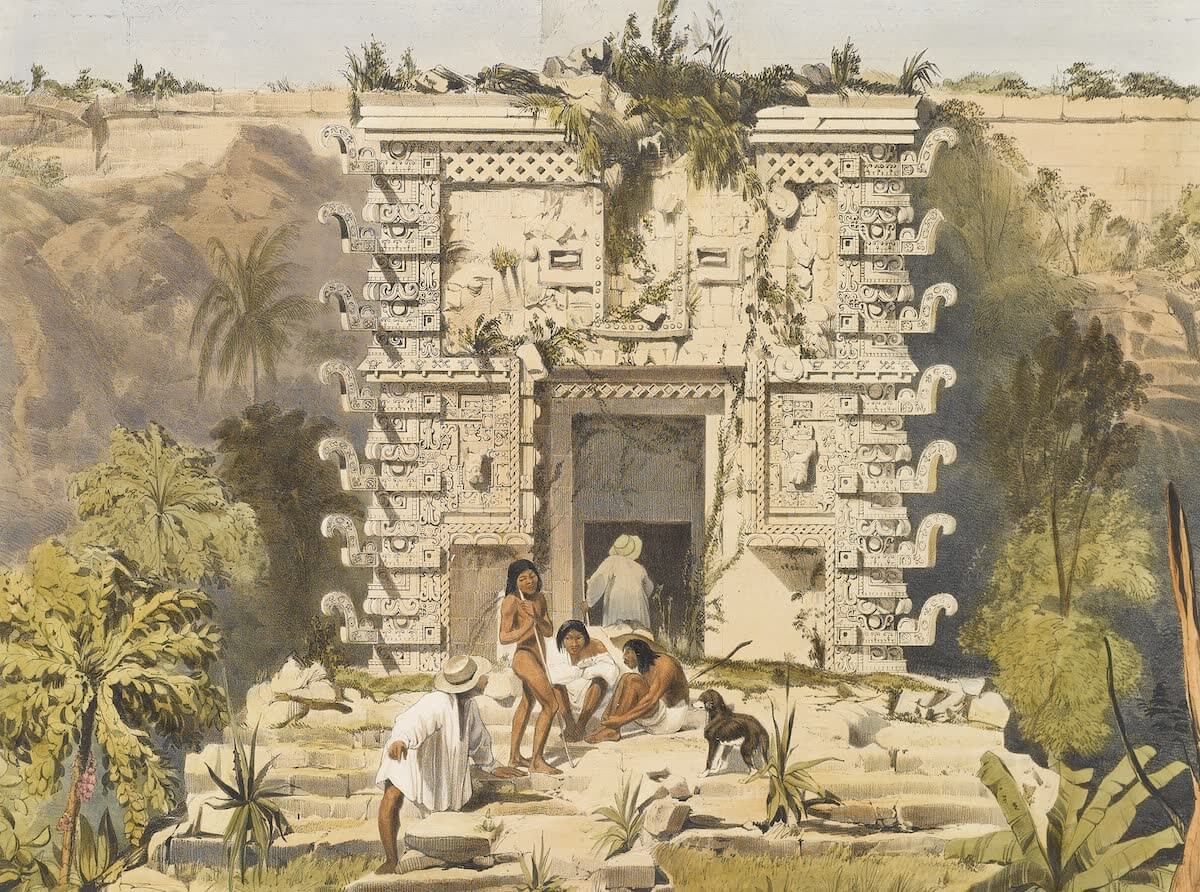 Uxmal is a deserted city of the Mayas in the state of Yucatan, Mexico, 20 m. W. of Tikul, a station on the railway between Merida and Valladolid. The ruins stand on a wooded plain, and cover an area of a little more than half a mile square, although fragments are found over a much larger space. Uxmal is the largest and most important of the deserted cities of Yucatán, and shows some of the finest specimens of Maya architecture.

The climate is much drier than that of Chiapas, and the structures are in a better state of preservation than those of Palenque, but the rank vegetation and the decay of the wooden lintels over the doorways have broken down many of the walls. Uxmal was inhabited for some time after the Spanish conquest, but perhaps only by a remnant of a population once much larger. The neighborhood is now very unhealthy, and it may be presumed that the process of depopulation, caused by increasingly unhealthy conditions and diminishing sources of food supply, was gradual.

There are no streams near the ruins, and the water-supply was derived from cisterns and from a few pools now filled with soil and vegetation. A rather soft limestone was used in the buildings, but the locality of the quarries has not been discovered. The walls are commonly about 3 ft. thick, in some cases much thicker, and the stones were set in a whitish mortar. Stone implements were used. The outer surfaces of the walls are usually divided by a horizontal moulding into two unequal zones, the lower one plain with a band of sculptured ornaments at the base, and the upper elaborately sculptured. The interior walls were generally plastered and rarely ornamented. There are no windows but large doorways. The jambs were of dressed stone, usually plain, and the longer lintels were of zapote wood; some of them, where protected from the weather, are still to be seen, sometimes covered with inscriptions.

The buildings are rectangular in shape, long and narrow, divided usually into two ranges of rooms. They are generally arranged in groups of four, enclosing a quadrangular court, and sometimes singly on massive eminences. The interiors are cut up into numerous small rooms by transverse partitions, while numerous beam holes and dumb-sheaves indicate other divisions. The rooms are covered by acutely pointed vaults, the stones forming the sides of the vault being bevelled to the angle, and the apex being covered by capstones covering spaces of one to two feet. The spaces between the vaults are filled with solid masonry, and above all is the roof covering, also of masonry, which is sometimes surmounted with an ornamental roof-comb. The buildings stand upon raised terraces, or upon truncated pyramids, approached by broad stairways, usually of cut stone.

There are five principal buildings or groups—the Temple of the Magician, Nunnery Quadrangle, House of the Turtles, House of the Pigeons and Governor's Palace. There are other structures and groups, smaller and more dilapidated. One of them, standing immediately S. of the Nunnery, consists of two parallel walls only: it is usually described as the ball-court, or gymnasium, a structure common to most Maya cities.

Temple of the Magician

The Temple of the Magician crowns an unusually steep pyramid 240 x 180 ft. at the base and 80 ft. high. It has three rooms, and a smaller temple is built against the upper western side of the pyramid. A broad steep stairway ascends to the summit platform on the E., and a narrower stairway to the lower temple on the W. The west front is filled with remarkable figures and designs, including the lattice work common in Uxmal.

The Nunnery Quadrangle consists of four large rectangular independent buildings, enclosing a quadrangular court, the whole occupying a terrace over 300 ft. square at the base and upwards of 15 ft. above the level of the plain. The buildings resemble each other in the arrangement of their rooms, and their elaborately ornamented facades face inwards upon the court. The division of the buildings into numerous small rooms is understood to signify that they were used as communal habitations, possibly of priestly orders.

The Governor's Palace, standing upon a triple terrace S. of the Nunnery, is, according to W. H. Holmes, " the most important single structure of its class in Yucatan, and for that matter in America." It is 320 ft. long, 40 ft. wide and 25 or 26 ft. high, divided into a long central and two end sections, separated by recesses and two transverse archways about 25 ft. long, 10 ft. wide and 20 ft. high. These archways were subsequently blocked, and may have been intended originally as portals to a quadrangle which was never built. The upper zone of the exterior walls is about 10 ft. wide, exclusive of the moldings and ornamental frieze, and its total length of 720 ft. is crowded with sculptures, in which there are three principal motives—the mask, the fret and the lattice. The projecting snouts in the line of masks forming the upper part of this zone are a peculiar feature of Uxmal ornamentation.

House of the Turtles

The House of the Turtles is a comparatively small structure near the N.W. corner of the Governor's Palace. It has the same features found in the other structures except for a line of sculptured turtles on the moldings of the frieze. Immediately S.W. of the Governor's Palace is a huge truncated pyramid, 200 × 300 ft. at the base and 60 to 70 ft. high.

House of the Pigeons

Beyond this is another large quadrangular group known as the House of the Pigeons. It resembles the Nunnery Quadrangle, except that the northern building carries a peculiar roof-comb of colossal size, running its entire length and rising to a height of about 16 ft. The base of this comb is 4 t. high, capped by a moulding and perforated by over 50 openings. Above this the comb is divided into nine sections rising by large steps to the apex, each pierced by 30 or more openings, like an immense dovecote. Projecting stones suggest that they were built to carry statues or figures like the roof-combs of Palenque.

There are no works available for the Uxmal collection.