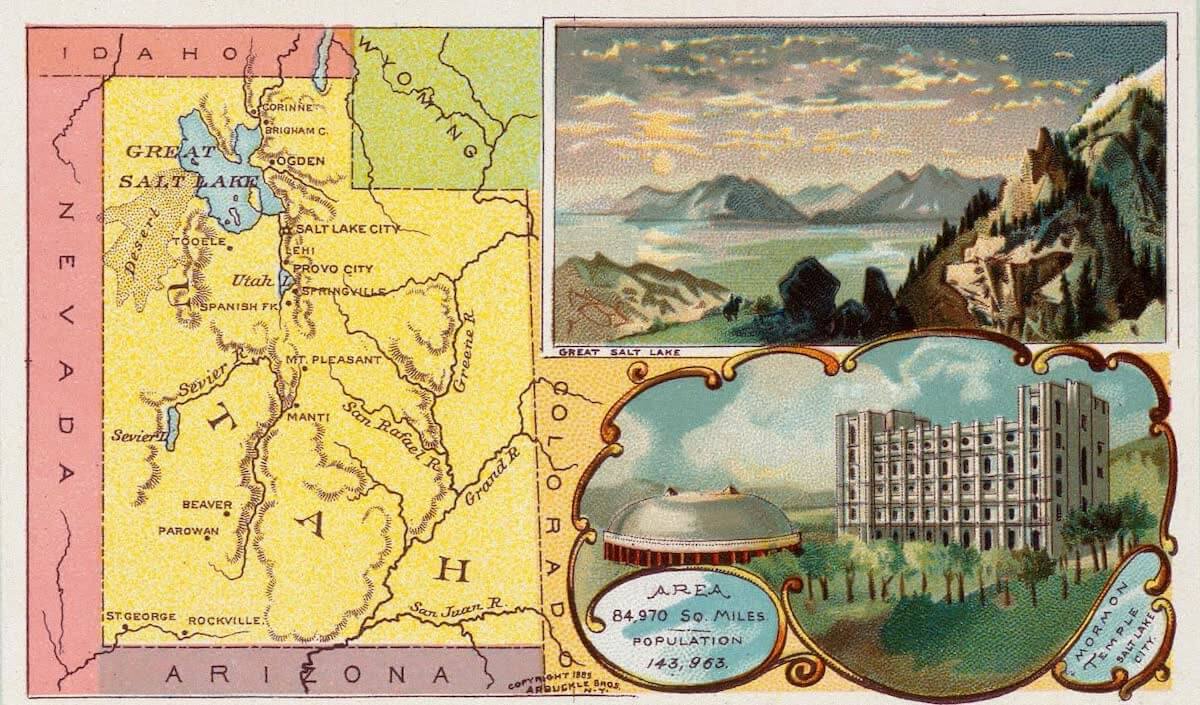 Utah (named from the Ute Indians), a western state of the Union, a trifle larger than Idaho; area 84,970 square miles; breadth 275 miles; extreme length 345. It is bounded on the north by Idaho and Wyoming, on the south by Arizona, on the west by Nevada and on the east by Wyoming and Colorado. The state, which ranks eighth in size, was first settled by the Mormons in 1847, and by them called Deseret.

Though the first settlement of note was made in 1847 at Salt Lake City by Mormons under Brigham Young, who were driven out of Nauvoo, Ill., the region (organized as a territory in 1850 and admitted to statehood in 1896) has an early history. This includes the visit of Spanish explorers in or about 1540 and the exploration of Colorado River. Seeking a route from Santa Fé to Los Angeles and the Pacific, two Franciscan friars in 1776 visited Utah and Sevier Lakes, where trading and hunting parties were afterwards organized. In 1824 Great Salt Lake was discovered by Capt. Jas. Bridger, a trapper, who was seeking to trace the course of Bear River.

Posts were established later, which were welcome to immigrants passing through the territory to Oregon and California, as also to the bands of traders and hunters who now began to operate in the region. Among these posts was Fort Ashley, built in 1825 and for a time occupied by an expedition under William Ashley. Later expeditions were those under Capt. Bonneville and John C. Frémont, the report of the latter, it is related, being instrumental in inducing the Mormons to come, though the Mexican War was in progress. Following the band of 150 Mormons that arrived in 1847 with Brigham Young, there came others to the colony at Salt Lake City, the region meanwhile having passed (1848) from Mexico to the United States.

Under the Mormon Church the state of Deseret, as it was called, was organized in 1849, while appeals were made to Congress for admission into the Union. This was refused, though the federal executive in 1850-1 created the territory of Utah and appointed Brigham Young as governor. For six years Young held office, the Mormon colony being considerably added to by proselytes and new arrivals while he was governor, though the region began to be populated by non-Mormons. Between the two sets of colonists there arose opposition, while trouble also came from the territorial officers sent by the federal government, who were opposed and interfered with the rule of the Mormon Church, tenacious of its power and hold upon the region.

In 1857 such were the difficulties that arose from the rival control of affairs, which more than once manifested itself in violence and attempts at mob-rule, that the federal authorities determined to supersede Young in the governorship, and for that purpose and to subdue disaffection sent troops to Salt Lake City, deposed Young and appointed a new governor. The outbreak of the Civil War for a time diverted federal vigilance over matters in the territory, but soon antipolygamy legislation arose and ere long dealt drastically with Mormonism. Immigration of an anti-Mormon character helped to neutralize the rule of the church, while the Edmunds bill of 1882, following other expedients of a legislative character, disfranchised all polygamists and abolished many of the officers in the territory and with them the corporation of the Mormon Church, while the property of Mormons was escheated.

So threatening and adverse to the church and its organizations was the aspect of affairs, that in 1890 President Woodruff, the head of the church, was necessitated to issue an ordinance discountenancing polygamy,—a timely action which met the approval of a general conference of the Mormon Church. Polygamy, nevertheless, continued for a time further to be practiced, and the taint of it so affected at least one senator from the state that he was not allowed to take his seat. In the case of another senator the national senate took action to inquire into the prevalence or existence of polygamy since 1890; but whatever there was, as time passed, was neutralized, kept in abeyance and finally stamped out by local prejudice against it among the anti-Mormon element in the state, while the rise and influence of political parties on national lines were effective in expunging the obnoxious practice and clearing the state of the immoral taint.

The constitution given the state in 1895, just a year before the admission of Utah to statehood, forbade polygamy. In 1905 settlement was extended by the opening of the Uinta Indians' reservation. The organization of the Mormon Church or Latter Day Saints, as they are called, continues to exist, though division has entered into their ranks and made two folds of them—one the Utah branch with 700 ministers, 796 churches and about 300,000 members, and the other, a Reorganized Branch, with headquarters at Lamoni, Iowa, which numbers about 50,000 with 860 active ministers.

Surface and Drainage. Besides the high, central Wasatch range, with its eastward spurs known as the Uintah Mountains, there are many other elevations southeast and west. The chief ones are Needle, Wah-Wah, Beaver River, Parowan, Henry, Deep Creek, Abajo, La Salle, Thomas, Desert, Terrace and Goose Mountains. From these ranges soar lofty peaks, as Mts. Peale and Gilbert and Emmons, Wilson, Hodges, Tokewanna and Lovenia Peaks, each of which exceeds 13,000 feet in height. The lake and river drainage also is considerable and varied, embracing (besides Great Salt Lake, 2,500 square miles in extent) Lake Utah and Bear and Sevier Lakes and Green, Grand, Colorado, Snake, Bear, Sevier, Virginia, Jordan and San Juan Rivers. In San Juan County, in the uninhabited arid almost inaccessible southeast, are the greatest natural bridges in the world. Emery Knowles discovered them in 1895. They number three. Augusta Bridge is 265 feet in height, 35 in width, 83 in thickness and 320 in span; Caroline 182, 60, 60 and 350 feet respectively; and Edwin 111, 30, 10 and 205. This is the slenderest and most graceful bridge. Each consists of light sandstone. The mountains around rise 11,000 to 13,000 feet.

Manufactures. There has been considerable progress in the development of manufactures in recent years. In 1909 the number of industrial establishments was about 750, employing some $52,600,000 of capital and turning out products to the aggregate value of $61,989,000. The two principal industrial centers are Salt Lake City and Ogden, the leading industries throughout the state being the smelting and refining of copper and lead ore, flour and grist-mill products, engineering work, railway repairing, printing and publishing, confectionery manufacture cheese and butter making, the preserving and canning of fruits, vegetables and condensed milk, together with foundry and machine output, the brewing of malt-liquors and cattle-slaughtering and meatpacking.

Commerce, Finance and Transportation. The railway mileage in 1910 was 1,985 miles, the more important lines being the Rio Grande Western, the Oregon Short Line, the Central Pacific, the Los Angeles and the Union Pacific. There were eight short lines also. In 1911 the state had 21 national and 68 state banks. The taxable property assessment for 1908 was close to $146,133,649, while the debt amounted to $900,000.

Education. The school-system is under a board, aided by a state and a county superintendent. Education is free, as are the text-books. Education from 8 to 16 is compulsory. Illiteracy is only 5% of the population, and half of the 6,141 illiterates are foreign-born. From a school population of about 105,000 in 1910 the enrollment was 87,721; while the average daily attendance was 69,246. Normal schools for the training of teachers are maintained at Salt Lake City in connection with the state University of Utah and also at Cedar City. Higher education is represented by the University of Utah, which has 125 instructors and 810 students; by Brigham Young College at Logan (Latter Day Saints) with 32 instructors and 704 students; and by Westminister College (Pres.) at Salt Lake City; there also is an agricultural college at Logan. The state university is co-educational, and, besides its normal-school department, has a school of mines and a school of arts and sciences.

There are no works available for the Utah collection.