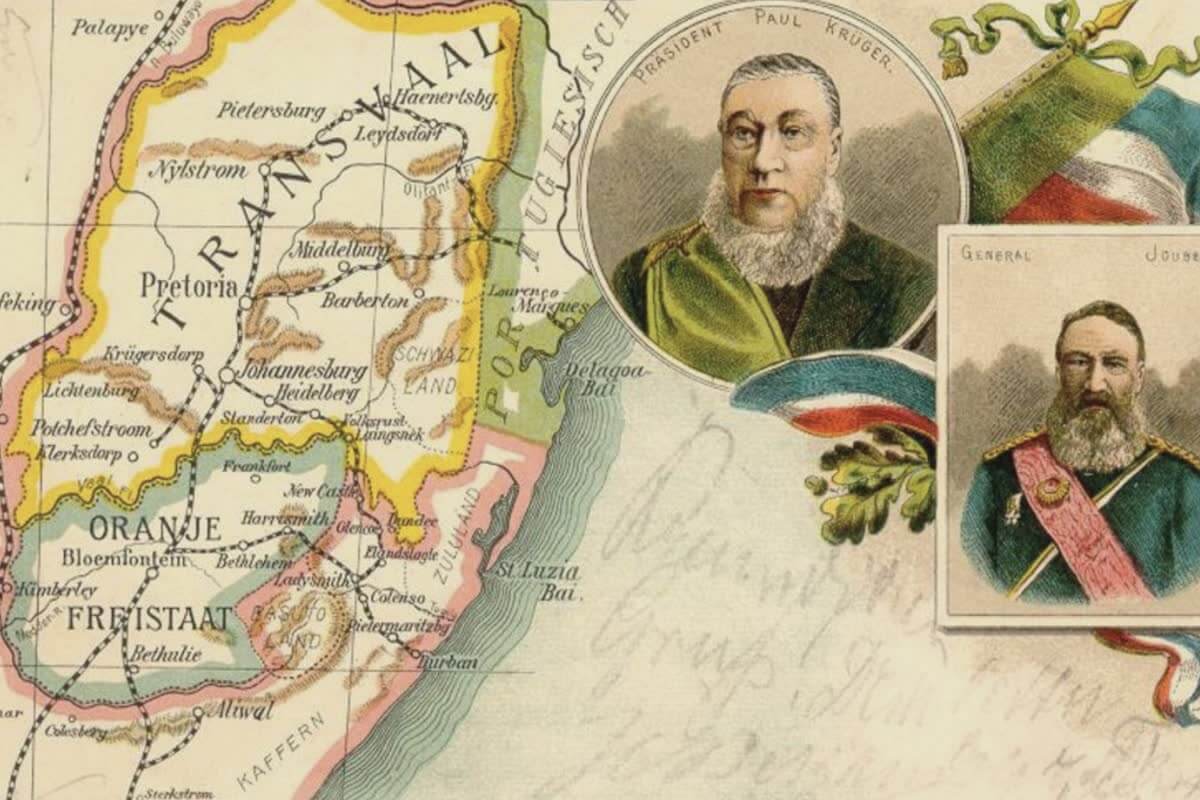 Transvaal (trans-val'}, formerly the South African Republic (1833-1902), is a British possession in Africa. It lies between Vaal River and Limpopo River and is bounded by Matabeleland (Rhodesia) at the north; Portuguese East Africa and Natal on the east; the Orange Colony to the south; and Bechuanaland on the west from Orange River to Southern Rhodesia. Swaziland was a protectorate of the former republic, which had an area of 119,139 square miles, but the transfer of the Vryheid and Utrecht districts; of Swaziland; and of part of the Wakkerstroom district to Natal reduced the area to 111,196 square miles. So Transvaal is of quite the same size as Arizona.

Surface and Climate. The land consists mainly of a plateau 3,500 to 5,000 leet above the sea. Lying in the same latitude south as Florida lies north, it has a semitropical climate, which, however, is dry and admirably adapted for settlers from temperate climes. The platea.u is bounded eastward by mountains rising 8,275 feet that shut off the winds of the Indian Ocean, while deserts west of Transvaal dry the winds from the Atlantic.

It is crossed in the north by the Zand Mountains and in the south by the Witwatersrand (Whitewater Ridge). Its chief rivers are the Vaal and Limpopo, and it has some large lakes. Both the mountains and the plateau are excep-tionally rich in coal, cobalt, copper, diamonds, gold, lead, saltpeter, sulphur and tin. The soil, if irrigated, would be well-suited to agriculture, but the rainfall is deficient; and the forests, chiefly acacias, are only of slight extent.

People and Government. The country was first occupied in 1833-7 t»y Boers from Cape Colony, among them a boy destined to become famous as President Kruger, who named their land Transvaal because it is across beyond Vaal River. In 1856 they became a republic, but factional troubles, unwise administration and wars with the natives led to annexation by Great Britain in 1877. In 1881, in consequence of fighting against England, the republic regained independence, subject, however, to British control over its foreign affairs. The discovery of the Witwatersrand goldfields (1885) attracted great numbers of foreigners, chiefly British, and finally occasioned annexation again to Britain in 1900. (See BOER WAR.) The population is 1,676,611 (that of Swaziland being 99,959), of whom over 300,000 are whites. Only 100,000 of these are Boers, and their chief occupation is stock-rearing, agriculture being only slightly practised.

The government is administered by a governor, who appoints a cabinet, and by a legislature consisting of a council and an assembly. The legislature meets annually, but the governor may prorogue or dissolve it, and it can not continue more than five years. Botha, the famous Boer general, is premier, and three other Boers hold cabinet-offices, non-Boers having only two. The government departments include agriculture, lands and native affairs, mines, public works, the secretaryship and the treasury, the minister of mines being the attorney-general also and the minister of agriculture the premier. Pretoria, with a white population of 29,660, is the capital. Johannesburg, the mining center of Witwatersrand, is the metropolis of Transvaal and the fourth city of Africa, having a white population of 120,411. (The high commissioner for South Africa administers Swaziland, but the laws of Transvaal rule it. Only 890 of the people are whites.)

Resources, Commerce, Communications. Industries are hindered by the insufficiency of the communications and particularly by the lack of unskilled labor for the mines. As the natives are not available, coolies are imported. The state's principal sources of revenue are the customs and the mines, but it is by no means self-supporting. The principal imports are provisions, machinery and clothing. The chief exports include gold (6,451,384 ounces fine in 1907), wool, cattle, hides, coal and diamonds (value in 1906 about $7,500,000). The gold-deposits are among the foremost in the world, gold-mining the supreme industry. Gold was discovered before 1875, an(^ *n I9°7 about $940,000,000 had been mined. In 1007 the yield was $129,000,000, John Hays Hammond calculates that $3,500,000,000 remain to be extracted and that within 30 years nearly all the paying deposits will probably have been exhausted.

The Pretoria diamond-fields rival those of Kimberley, the world's hugest diamond having been discovered in Transvaal. Nearly 2,200 miles of railway are open, about 400 are under construction, and several hundred are projected. The Transvaal and Orange railways are under joint control, and nearly $30,-000,000 are to be spent on new roads. There are 2,500 miles of telegraph, communicating with inmost Africa as well as the outside world; 769 miles of telephone; 393 postoffices; and seven great banks, including the postal savings-bank. Transvaal's population should increase greatly for another decade. Even if its goldmines become exhausted by 1935, farming, grazing, manufacturing and the remaining mineral resources ensure the permanence of population and prosperity.