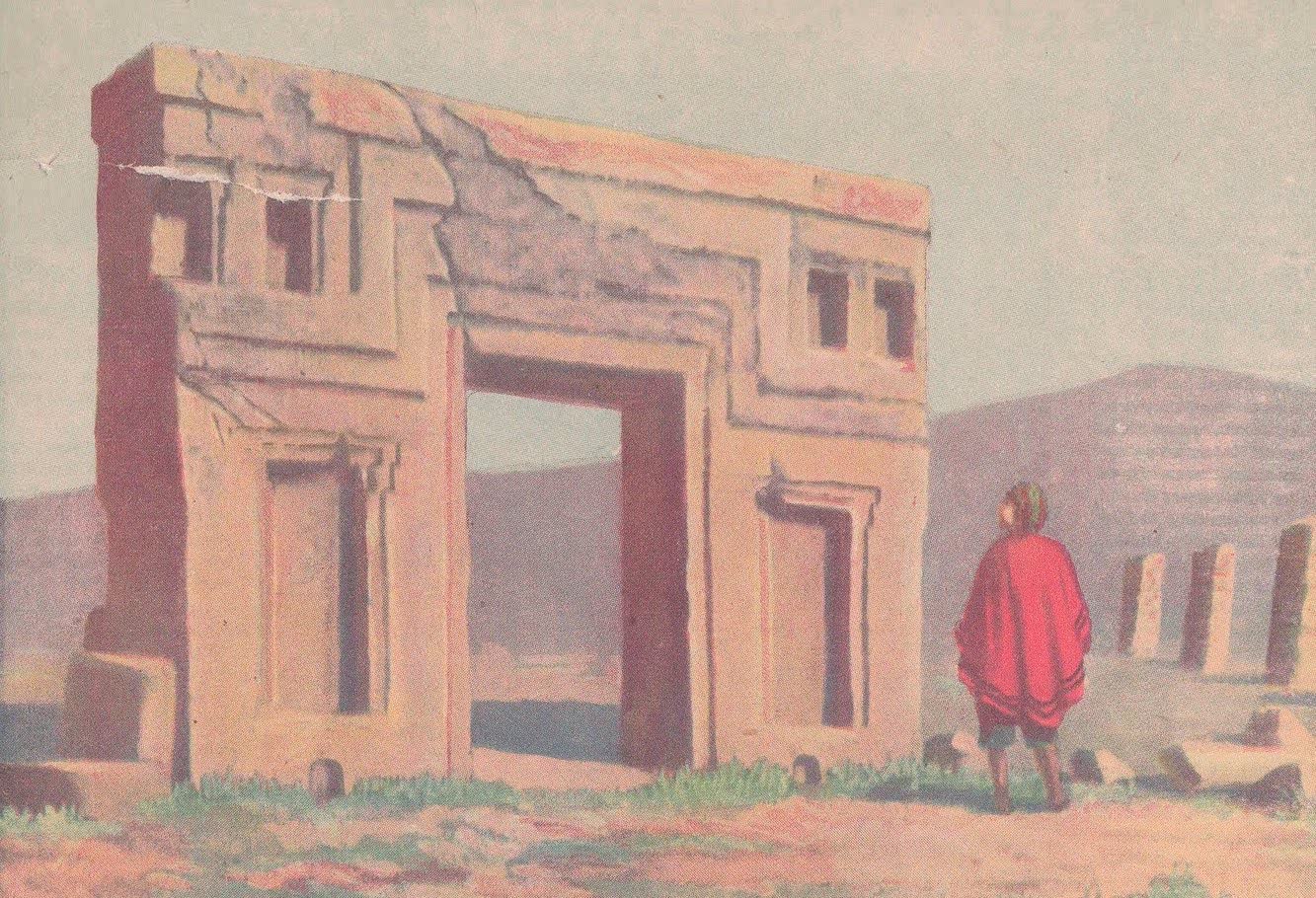 Tiwanaku (Spanish: Tiahuanaco or Tiahuanacu) is a Pre-Columbian archaeological site in western Bolivia near Lake Titicaca and one of the largest sites in South America. Surface remains currently cover around 4 square kilometers and include decorated ceramics, monumental structures, and megalithic blocks.

The site was first recorded in written history in 1549 by Spanish conquistador Pedro Cieza de Leon while searching for the southern Inca capital of Qullasuyu. Detailed study of Tiwanaku began on a small scale in the mid-nineteenth century. In the 1860s, Ephraim George Squier visited the ruins and later published maps and sketches completed during his visit.

German geologist Alphons Stubel spent nine days in Tiwanaku in 1876, creating a map of the site based on careful measurements. He also made sketches and created paper impressions of carvings and other architectural features. A book containing major photographic documentation was published in 1892 by engineer B. von Grumbkow. With commentary by archaeologist Max Uhle, this was the first in-depth scientific account of the ruins.

The age of the site has been significantly refined over the last century. From 1910 to 1945, Arthur Posnansky maintained that the site was 11,000-17,000 years old based on comparisons to geological eras and archaeoastronomy. Beginning in the 1970s, Carlos Ponce Sangines proposed the site was first occupied around 1580 BC, the site's oldest radiocarbon date.

The structures that have been excavated by researchers at Tiwanaku include the Akapana, Akapana East, and Pumapunku stepped platforms, the Kalasasaya, the Kheri Kala, and Putuni enclosures, and the Semi-Subterranean Temple. These may be visited by the public today.

The Akapana is an approximately cross-shaped pyramidal structure that is 257 m wide, 197 m broad at its maximum, and 16.5 m tall. At its center appears to have been a sunken court. This was nearly destroyed by a deep looters excavation that extends from the center of this structure to its eastern side. Material from the looters excavation was dumped off the eastern side of the Akapana. A staircase with sculptures is present on its western side. Possible residential complexes might have occupied both the northeast and southeast corners of this structure.

Originally, the Akapana was thought to have been developed from a modified hill. Twenty-first-century studies have shown that it is an entirely manmade earthen mound, faced with a mixture of large and small stone blocks. The dirt comprising Akapana appears to have been excavated from the "moat" that surrounds the site. The largest stone block within the Akapana, made of andesite, is estimated to weigh 65.7 tonnes. The structure was possibly for the shaman-puma relationship or transformation through shape shifting. Tenon puma and human heads stud the upper terraces.

The Akapana East was built on the eastern side of early Tiwanaku. Later it was considered a boundary between the ceremonial center and the urban area. It was made of a thick, prepared floor of sand and clay, which supported a group of buildings. Yellow and red clay were used in different areas for what seems like aesthetic purposes. It was swept clean of all domestic refuse, signaling its great importance to the culture.

The Pumapunku is a man-made platform built on an east-west axis like the Akapana. It is a rectangular, terraced earthen mound faced with megalithic blocks. It is 167.36 m wide along its north-south axis and 116.7 m broad along its east-west axis, and is 5 m tall. Identical 20-meter-wide projections extend 27.6 meters north and south from the northeast and southeast corners of the Pumapunku. Walled and unwalled courts and an esplanade are associated with this structure.

A prominent feature of the Pumapunku is a large stone terrace; it is 6.75 by 38.72 meters in dimension and paved with large stone blocks. It is called the "Plataforma Litica". The Plataforma Litica contains the largest stone block found in the Tiwanaku site. According to Ponce Sangines, the block is estimated to weigh 131 metric tons. The second-largest stone block found within the Pumapunku is estimated to be 85 metric tons.

The Kalasasaya is a large courtyard more than 300 feet long, outlined by a high gateway. It is located to the north of the Akapana and west of the Semi-Subterranean Temple. Within the courtyard is where explorers found the Gateway of the Sun. Since the late 20th century, researchers have theorized that this was not the gateway's original location.

As the site has suffered from looting and amateur excavations since shortly after Tiwanaku's fall, archeologists must attempt to interpret it with the understanding that materials have been jumbled and destroyed. This destruction continued during the Spanish conquest and colonial period, and during 19th century and the early 20th century. Other damage was committed by people quarrying stone for building and railroad construction, and target practice by military personnel.

No standing buildings have survived at the modern site. Only public, non-domestic foundations remain, with poorly reconstructed walls. The ashlar blocks used in many of these structures were mass-produced in similar styles so that they could possibly be used for multiple purposes. Throughout the period of the site, certain buildings changed purposes, causing a mix of artifacts found today.