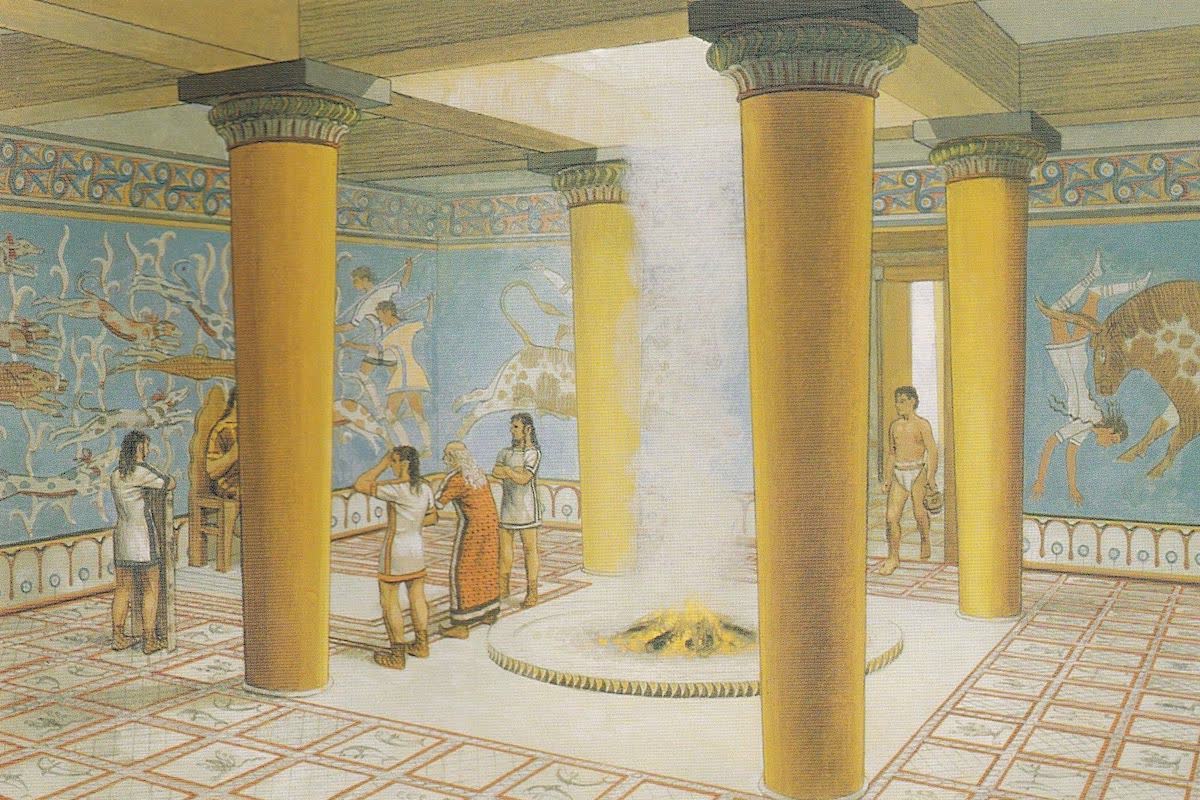 Tiryns (Il. ii. 559) was a small Peloponnesian city, in the prehistoric period of the Achaean race, long before the Dorian immigration. It stood on a small rock in the marshy plain of Argolis, about 3 m. from the sea, and was fabled to have been founded by King Proetus, the brother of Acrisius, who was succeeded by the hero Perseus.

It was the scene of the early life of Heracles, who is hence called Tirynthius. The massive walls, which appear to be of earlier type than those of Mycenae, were said to have been the work of Cyclopean masons. Its period of greatest splendour was probably between the 14th and 12th centuries B.C.; in Homeric and subsequent times it was usually subject to Argos.

The palace was probably burnt at the time of the Dorian conquest. After the Spartan defeat of Argos in 494 B.C. Tiryns regained temporary independence, and the Tirynthians fought on the Greek side at Plataea, while the Argives held aloof. Soon after, in 468 B.C., Tiryns was finally destroyed through the jealousy of the Argives, and the site has been deserted ever since, but for a brief occupation in Byzantine times.

Excavations made in 1884-1885 by Schliemann and Dörpfeld over part of the rock on which Tiryns stood have exposed a most interesting building, which offers the most complete example of a palace of the Mycenaean age in Greece. The rock on which Tiryns is built is of an irregular oval shape, about 330 yds. long by 112 at the widest part, and is surrounded by a very massive wall, varying from 30 to 40 ft. in thickness and averaging when complete about 50 ft. in height, measuring from its base outside. Inside, the wall was probably not more than 10 or 12 ft. high above the ground, so the masonry acts as a retaining wall to a considerable depth of earth which covers the rock (see fig. 2 belowabove). The wall is built of very large hammer-dressed blocks, some as much as 10 ft. long by 3 ft. 3 in. or 3 ft. 6 in. wide, with smaller ones to fill up the interstices.

The whole was bedded, not in mortar, but in clay, which has mostly been washed out of the joints; originally the surface was probably protected with a coating of stucco. The only important gateway, which was on the east side, away from the sea, probably resembled the "lion gate" at Mycenae. The other entrances are mere slits in the wall. One of these and the chief gate are shown in fig. 1. Internally the area of the city was divided by cross walls into three parts at successive levels.

The lowest and middle divisions have not yet been excavated; the upper part at the south end of the rock was completely exposed in 1884-1885 by Schliemann and Dörpfeld, and the almost complete plan of the various structures clearly made out. This division contains the palace of the ruler of Tiryns, a building which shows careful and skilful construction, elaborate decoration, and a well-arranged plan, suitable to the wants of a wealthy autocratic chief, who lived in a manner which partly recalls the luxury of an Oriental king, and also resembled the feudal state of a medieval baron, surrounded by a crowd of vassals. From the main gate, which was defended by a tower, a strong passage led between the outer wall and an inner one to an inner gate, thence to a propylaeum or double porch, with two wooden columns on each side, adjoining which were chambers for guards. Then came another similar, but smaller propylaeum, and opposite to that was the entrance to the great court (????), nearly 53 by 70 ft., in which stands an altar or pit of sacrifice, in a position similar to that occupied by the altar of Zeus Herceus in the later Greek house.

This court was surrounded by wooden columns supporting a roof, like a medieval cloister; on the south side are chambers for attendants (???????). On the north side is the great hall (???????), with an outer portico supported by two columns (???????) and an inner vestibule (????????) with three doors. The hall is about 40 by 30 ft., with a circular hearth in the centre (????? or ??????). Four columns supported the roof, the central part of which probably rose above the rest like a medieval "lantern." On the west side of the hall are a number of small chambers (???????), and a bathroom about 12 by 10 ft., with its floor formed of one great slab of stone, sloped so as to drain out at one side through a pipe which passes through the wall. In addition to this there is also a second system, with open courts, hall and chambers; this has been generally supposed to be the women's quarters, but there is no authority for such duplication, and it is possible that it should rather be explained as another house.

It is approached in a very circuitous way, either by a passage (?????) leading from a side door in the main propylaeum or by another long passage which winds round the back of the chief hall, and so leads by a long flight of steps, cut in the rock, to the little postem door in the semicircular bastion. A staircase led to an upper floor. The circuit wall round the palace is more strongly constructed than the rest. On the south is a gallery built in the thickness of the wall, and roofed by protecting courses of stone; and chambers or storehouses open out of this gallery. The wall on the east side has a similar arrangement (see fig. 2). At the top level the wall was covered by a colonnade of wooden pillars resting on circular stone blocks. This supported a flat roof and was open to the inside of the fortress. The back of the colonnade was built of brick, and is now missing, as are all the brick parts of the palace, owing to the bricks having been only sun-dried.

The methods of construction employed in the Tiryns palace are of the highest interest. The foundations and about 3 ft. of the walls above the ground are made of large blocks of stone bedded in clay; above this the wall was of brick, sun-dried, and covered with stucco. The upper storey was probably of wood. Some of the thresholds of the doors were massive blocks of stone (?????? ?????); others were of wood (??????? ?????). Wood was also used for all the columns, doorposts, and antae (??????????), and in some cases the walls of the rooms were lined with wood, carefully fixed by dowels, the holes for which still exist. The doors had pivots of bronze revolving in well-fitted bronze cup-like sockets let into the thresholds. In the megaron and other rooms the floors are of good concrete decorated with a simple series of incised lines, coloured blue and red. The stucco of the internal wall is decorated with bold and very effective patterns — birds and scroll-work and other decorative designs. The best preserved painting shows a scene from a bullfight.

Both subjects and style show close analogy to the paintings in the palace at Cnossus in Crete. One example of rich and costly decoration remains — part of a frieze of white alabaster, sculptured in relief with rosettes and interlacing patterns, and studded with jewel-like pieces of blue glass or enamel, the ??????? ??????? of Od. vii. 87. Further excavations in the lower parts of the city will probably bring to light the dwellings of the citizens who garrisoned the place. The great bulk of the Tirynthians must have lived in houses outside the citadel, but under the shelter of its protection, just as in medieval Italy villages grew up round the castles of any powerful lord.

The relation of the palace at Tiryns to those described in the Homeric poems has given rise to much discussion. The case is somewhat altered by the discovery of several other early houses, of similar character, but not identical in plan, at Mycenae and elsewhere in Greece; these do not, for example, show the duplication of the essential parts of the house found at Tiryns. It is now generally recognized that, while the general character of the palace at Tiryns is invaluable as illustrating the type of house in the mind of the Homeric poet, it is a mistake to appeal to it for the explanation of details of arrangement such as probably varied considerably according to the conditions and requirements in different cases.

There are no works available for the Tiryns collection.