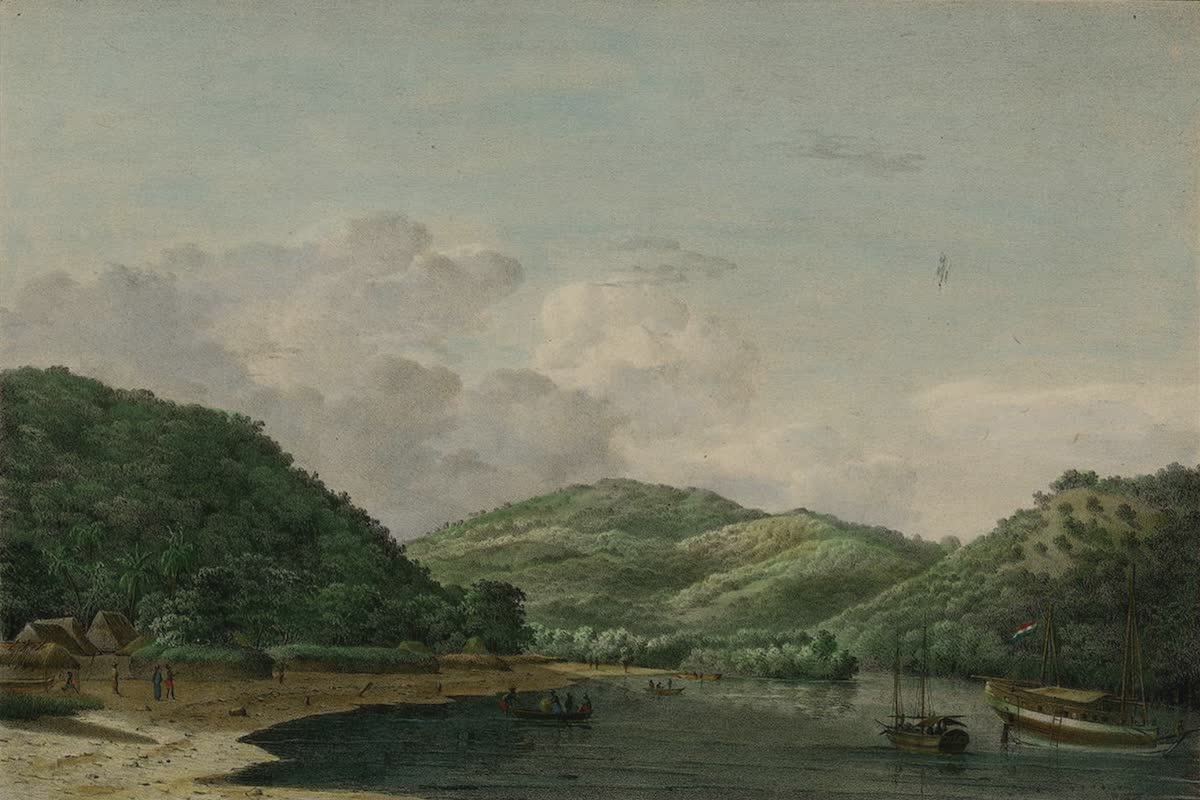 Together with Sumba, Babar and associated smaller islands, Timor forms the southern outer archipelago of the Lesser Sunda Islands with the inner islands of Flores, Alor and Wetar to the north, and beyond them Sulawesi.

Timor is the principal island of the Outer Banda Arc, which has been upthrust by collision with the Australian continent. Timor has older geology and lacks the volcanic nature of the northern Lesser Sunda Islands. The orientation of the main axis of the island also differs from its neighbors.

These features have been explained as the result of being on the northern edge of the Indo-Australian Plate as it meets the Eurasian Plate and pushes into South East Asia. The climate includes a long dry season with hot winds blowing over from Australia. Rivers on the island include the Southern and Northern Laclo Rivers in East Timor.

The largest towns on the island are the provincial capital of Kupang in West Timor, Indonesia and the Portuguese colonial towns of Dili the capital, and Baucau in East Timor.

It stretches S.W. and N.E. for 300 m. between 8° 40' and 10° 40' S., and between 123 30' and 127 E. It has a mean breadth of 60 m., and an area of about 12,500 sq. m. Politically its north-eastern half is Portuguese, as are two small enclaves in the south-western half, the remainder being Dutch. Timor lies in deep water a little to the west of the hundred fathom line, which marks in this direction the proper limit of the shallow Arafura Sea, extending between it and northern Australia. It differs considerably from the other members of the Sundanese group both in the direction of its main axis and in the prevalence of old rocks and slighter volcanic character.

It comes, however, within the great volcanic zone which stretches from the north of Sumatra, through Java and the other Sundanese islands, round to Amboyna, Tidore, Ternate, Halmahera and the Philippines. There appear to be volcanic centres in both the east and the west of the island, and the surface is everywhere extremely rugged, with ridges from 4000 to 8000 ft. high, forming a confused orographic system, which is by no means fully understood. Mount Kabalaki in the north rises above 10,000 ft.; the culminating point appears to be Mt Alas (over 12,000 ft.) near the east coast.

Owing to the prevalent dry easterly winds from the arid plains of north Australia, Timor, like Ombay, Flores and other neighbouring islands, has a much drier climate, and a poorer vegetation, than islands further west, and has few perennial streams and no considerable rivers. Hence, apart from almost untouched mineral wealth, such as iron, copper and gold, the island is poor in natural resources. Coal and petroleum have been found. At Kupang, on the south coast, the number of rainy days per month in the six months May to October dwindles from 4 to o, while the monthly rainfall gradually sinks from a little less than 2 in. to nil; the northern districts are better watered.

Though the mineral products are varied, the supply of ores has hitherto proved scanty; besides which»their exploitation is rendered difficult by the lack of labourers, water and wood. The uplands yield fairly under cultivation, while the woodlands, which nowhere form true forests, contain much excellent sandalwood. This and a noted breed of hardy ponies form the chief articles of export.' Owing to the deep water between Timor and the Arafura Sea, the fauna of Timor presents scarcely any Australian types beyond a marsupial cuscus. The few mammals; such as deer, civet, pigs, shrews and monkeys, as well as the birds and insects, resemble ordinary Malayan forms.

Timor consists of a core of ancient rocks (Archean?) upon which rest Permian and later deposits of sedimentary origin. Volcanic rocks are also present but they are not so extensively developed as in the islands of the Javan arc. The Permian beds consist chiefly of limestone and contain numerous fossils similar to those of the middle and upper divisions of the Productus limestone of northern India and the Artinsk stage of the Urals. The best-known locality is the bed of the Ayer Mati near Kupang. These rocks were origin- ally referred to the Carboniferous system, and similar limestones have been recorded in many parts of the island. Triassic beds with Halobia and Monotis are well-developed in Rotti and appear also to occur in Timor. The fauna is similar to that of the Mediterranean Trias. Fragments of Jurassic rock have been found amongst the volcanic material on the island of Rotti, but they have not yet been discovered in situ. The Tertiary deposits form a fringe around the older rocks, and in some places this fringe extends far up into the interior of the island.

The bulk of the population is certainly Papuan, but intermingled with Malayan, Polynesian and other elements; hence it presents -an extraordinary diversity of physical types, as is clearly shown by the portraits figured in H. O. Forbes's Naturalist's Wanderings in the Eastern Archipelago. The natives, still mainly independent of their nominal Dutch and Portuguese rulers, are divided into many hostile tribes, speaking as many as forty distinct Papuan and Malayan languages or dialects. Some are addicted to head- hunting, at least during war, and to other barbarous practices. In their uma-luli, or sacred (tabooed) enclosures, rites are performed resembling those of the Polynesian islanders.

Portuguese Timor includes the neighboring isle of Pulo Kambing, and has an area of about 7450 sq. m. Estimates of the population vary from 300,000 to over half a million. Dilli, on the north coast, the administrative headquarters and chief settlement, is a poor little place of some 3000 inhabitants, containing hardly any Europeans apart from the officials. Macao was administratively united to Portuguese Timor till 1896, and still pays a contribution to the revenue. The estimated revenue for 1901-1902 was £25,196 £7200 from Macao), and in 1905-1906 it was £26,968 ; the estimated expenditure was £36,532 in the earlier and £43,320 in the later period. Few ships visit the colony, except Dutch vessels trading in the archipelago, which call regularly at Dilli. Exports (principally coffee and wax) are valued at about £55,000 annually, and imports at about the same amount.

Dutch Timor has an area of a little over 5000 sq. m. Kupang, the chief town of the residency, contains some 8000 inhabitants, of whom 145 are Europeans living in well-built houses, 594 Chinese, and 43 Arabs. In agriculture, European plants have not been successful, and of native products the supply is only sufficient for the home consumption. The export of sandalwood, ponies, cattle, pinang nuts,_&c, amounts in a year to only about £8500. Dutch Timor gives its name to a residency comprising, besides its own territory, the small adjacent islands, Rotti, Peman, &c, the Savu islands, Sumba or Sandalwood island, the Solor and Allor group of islands, and the eastern half of Flores, all lying between 8° 5' and 11° 5' S. and 119° 3' and 125 15' E., the total area being 17,698 sq. m. It is divided into four administrative districts-Timor, Rotti and Savu, Larantuka (eastern Flores) and Sumba. Pop. of the residency (1905), 308,500.

It is possible that the Portuguese visited Timor before the Spaniards did so in 1522. They were, at any rate,. established on the island when the Dutch expelled them from Kupang in 1613. During the 18th century the two powers came frequently into conflict; and in 1859 their boundaries were settled by treaty. This treaty was replaced by one signed at Lisbon in June 1893. The old treaty had proved irksome in many ways, especially as it left portions of the territory belonging to protected chieftains of each power as enclaves within the boundaries of the other. This led to frequent disputes, and a mixed boundary commission was therefore appointed under the new treaty and determined more satisfactory boundaries. The new treaty, moreover, stipulates that all future disputes shall be referred to arbitration. Equally important is the declaration, signed at the same time, that either power would favor the subjects of the other in granting concessions, &c, to the exclusion of all others. Thus Portugal and Holland secured the exclusive possession of Timor to themselves.

There are no works available for the Timor collection.