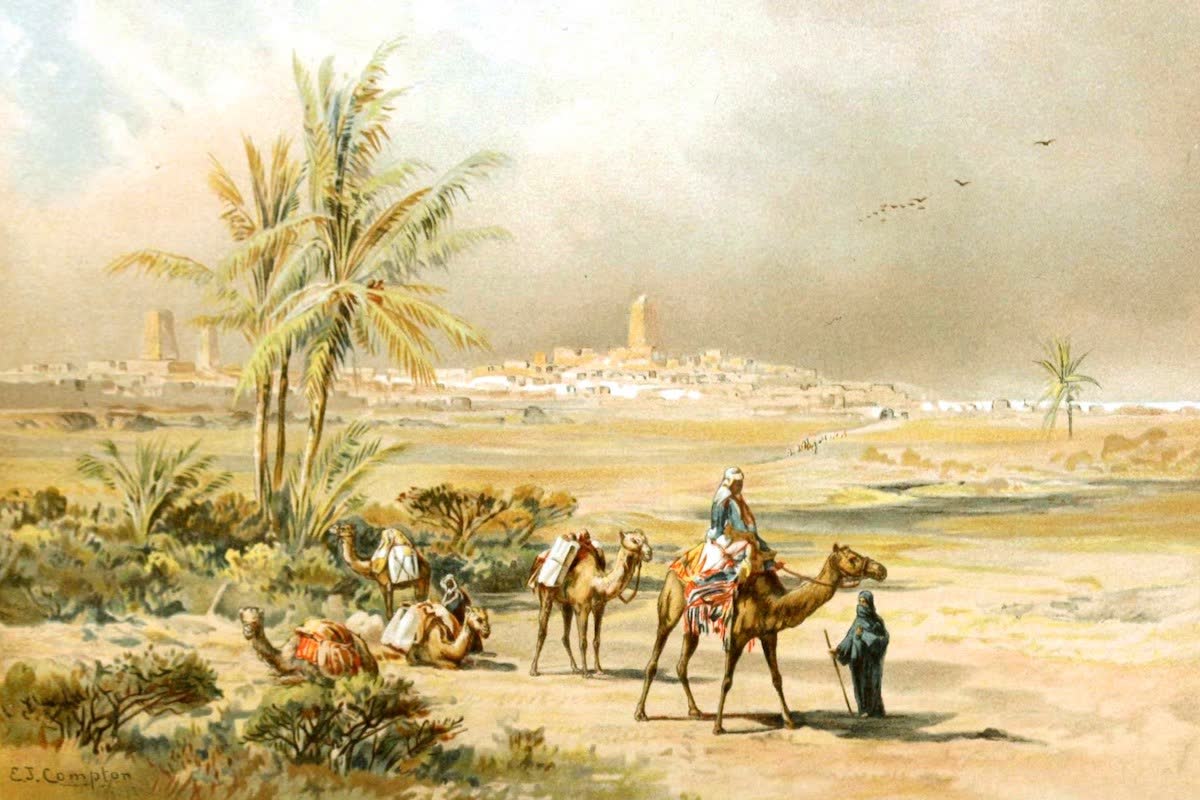 TIMBUKTU (French spelling Tombouctou), chief town of the territory of Timbuktu, French West Africa, 9 m. N. of the main stream of the Niger in 16° N. and 5° W. Timbuktu lies on a terrace formed by the southern scarp of the Sahara, about 800 ft. above sea-level, and overlooking a chain of dhayas or marshy hollows, fringed here and there with a few mimosas and palm thickets, amid the surrounding sandy wastes.

These dhayas, which are flooded every three or four years, converting the lowland tracts between the terrace and the main stream into a labyrinth of channels and backwaters, mark the bed of a navigable creek which formerly branched from the Niger northwards to the foot of the scarp, and which in 1640 inundated a low-lying quarter of the city.

It is conjectured that the main stream followed this course before it took its present easterly curve to Burrem, where it bends southwards to the coast. Here also it was probably joined at some remote period by the now dried-up Wadi Messaura from the Tuat oases south of Algeria, although the rough levels taken by Oscar Lenz and others make it uncertain whether the flow through this depression was northwards or southwards. In any case Timbuktu has been left, so to say, high and dry by the general process of desiccation going on throughout the Saharan region.

Timbuktu has been described as “the meeting point of the camel and the canoe,” “the port of the Sahara in the Sudan,” and (more correctly) “the port of the Sudan in the Sahara.” It is a great “exchange” for the produce of North Africa and that of the rich countries south and west of the Niger. It was formerly a much larger place than it was found to be at the time of its occupation by the French in 1893-1894.

Extensive ruins exist north and west of the present town. The great mosque which at one time stood in the centre of the town now lies near the western outskirts, where its high but unsightly earth tower forms a striking landmark. The mosque of Sidi Yaia (in the centre of the town) and that of Sankoré in the north-east also possess prominent towers. Two forts, built by the French and placed, one on the northern the other (Fort Bonnier) on the southern side of the town, protect the roads to the desert and the river respectively. Whereas in 1895 the town was little more than a vast ruin, under French protection the inhabitants, relieved from the fear of Tuareg oppression, set about repairing and rebuilding their houses; trade revived; new streets were built; European schools, churches and other establishments were opened.

The industries of Timbuktu — cotton-weaving, earthenware, leather-work and embroidery — are of subordinate importance, and the great bulk of the people are occupied exclusively with trade. The whole traffic of the surrounding lands converges on Timbuktu, which has a transit trade estimated at over £800,000 per annum. Considerable quantities of British and German fabrics, hardware, beads, &c., are conveyed across the Sahara from Mogador (Morocco), while two great caravans of 3000 or 4000 camels are yearly charged with salt from the Taudeni district, salt being an article which the Niger countries lack. The imports via the Sahara average about £50,000 annually, and by way of Senegal goods of equal value are received. From the south come cereals, gold, wax, ivory and coarse native cotton goods, now brought to Kabara (the port of Timbuktu) by steamers plying on the upper Niger. Cowries, the former currency (2500 = 5 francs), have been generally replaced by French money. It is proposed to connect the city with the Niger by a canal.

Timbuktu, which possesses some valuable Arabic manuscripts — notably the Tarik es-Sudan, a 17th-century history of the Sudan written by Abderrahman Sadi of Timbuktu — and is a centre of Moslem teaching, is a converging point of the chief west Sudanese and Saharan races — Arabs or Arabized Berbers to the west; Songhoi in the immediate vicinity, and thence south-eastwards along the Niger; Ireghenaten or “mixed” Tuareg southwards across the Niger as far as the Hombori Hills and in the fertile Libbako plains beyond them; Fula, Mandingos, and Bambara in and about the city; and Imoshagh (Tuareg) belonging to the Awellimiden confederation mainly to the north and east.

The local administration — preserved under French rule — is in the hands of an hereditary kahia, a kind of mayor, descended from one of the Ruma families (see below). The kahia, during the greater part of the 19th century, was more or less under the control of the powerful Bakhai (Backay) family, who, as “sherifs” and marabouts, were revered throughout the western Sahara.

History. — The history of Timbuktu is intimately connected with that of the city of Jenné and the Songhoi Empire. Tin-Buktu in Arabic may stand for “the well of Buktu”; in the Songhoi tongue the word means a hollow. The Songhoi are a black race reported to have come to the Niger countries from the Nile valley. In the 8th century they made themselves masters of a considerable tract of country within the bend of the Niger, and built the city of Gao (q.v.) 200 m. in a direct line S.S.E. of Timbuktu, making it their capital. In the 11th century they were converted to Islam. Besides Gao, the Songhoi founded Jenné (q.v.), which early attained considerable commercial importance. Meantime (11th century) a settlement had been made at Timbuktu by Tuareg. Perceiving the advantages for trade with the north offered by this desert rendezvous, the merchants of Jenné sent agents thither (12th century), and Timbuktu shortly afterwards became known to the inhabitants of the Sahara and Barbary as the best market in which to dispose of their salt and other goods, and also for the purchase of the many commodities of the western Sudan. In the 12th or 13th century Timbuktu fell under the power of the Mandingo kings of Melle or Mali, a country lying west and south of Jenné. Its fame as a mart for gold and salt spread to Europe, “Timboutch” being marked on a Catalan map dated 1373. In 1353 it had been visited by the famous traveller Ibn Batuta. In 1434 the Tuareg made themselves masters of the city, which in 1469 was captured by the Songhoi king Sunni Ali. In the days of Sunni's successor Askia (1494-1529), who completed the conquest of Melle begun by Sunni Ali, the Songhoi empire reached its highest development, and Timbuktu rose to great splendour. The “university” of Sankore became a chief centre of Mahommedan culture for the peoples of the western Sudan. One of the sheikhs of Sankore, Ahmad Baba, was among the most learned of Moslems. Some of his writings are still extant. The riches of Timbuktu excited the cupidity of El Mansur. sultan of Morocco, who, in 1590, sent an army across the Sahara under an “Andalusian” Moor (that is, a Moor descended from those expelled from Spain), which captured Timbuktu (1591) and completely broke up the Songhoi empire. The Moors made Timbuktu their capital city. For about twenty years after the conquest the pasha who ruled at Timbuktu was nominated from Morocco, but the distance of the Niger countries from Marrakesh enabled this vast viceroyalty to throw off all allegiance to the sultan of Morocco.

The Niger Moors, known as Rumas after El Mansur's musketeers, quarrelled continually among themselves, and oppressed the black tribes. By the end of the 18th century two hundred years of oppression had reduced Timbuktu to comparative desolation and poverty. By this time the whole country was in a state of anarchy, and in 1800 the Tuareg swooped down from the desert and captured the place. They were in turn (1813) dispossessed by the Fula, who in 1840 gave place to the Tukulor, led by El Haj Omar, the first great opponent of the extension of French influence in the Niger bend. When the French reached Timbuktu in December 1893 they found that the town had again fallen beneath the rule of the Tuareg. The townsfolk, indeed, from the time of the decay of the Ruma power being at the mercy of all comers, were content to pay tribute to each in turn and sometimes to more than one simultaneously, for which they indemnified themselves by peaceful intervals of trade whenever the land routes were open and the upper and lower reaches of the Niger clear of pirates. But at times even the short tract separating the town from Kabara was so beset with marauders that it bore the ominous name of “Ur-immandess,” that is, “He (God) hears not.” Little wonder then that the townsfolk, wearied by the extortions and internecine strife of their Fula and Tuareg masters, freely opened their gates to the French as soon as Lieut. Boiteux reached Kabara in command of a small flotilla.

The occupation of the town, against orders, was a daring exploit of a handful of marines. The force which “garrisoned” Timbuktu consisted of but seven Europeans and twelve Senegalese, a somewhat larger body being left with the gunboats at Kabara. On the 28th of December the Tuareg attacked the boat party, killing Naval Ensign Aube, another officer, and eighteen black sailors. Colonel T. P. E. Bonnier, who was at Mopti, 200 m. to the south-west, marched to the relief of Boiteux and entered Timbuktu without opposition on the 10th of January 1894. Leaving part of his force in the town the colonel set out with about 100 men to chastize the nomads. In the night of the 14th-15th January his camp was surprised and the colonel and nearly all his men perished. The enemy did not follow up their victory, and within a short period French rule was firmly established in Timbuktu.

Apart from some Christian captives, the place was reached during the 19th century, previous to its capture by the French, by four Europeans — Major Gordon Laing from Tripoli (1826), who was murdered by order of the Fula; René Caillié from the south (1828), Heinrich Barth from Central Sudan (1853) and Oskar Lenz from Morocco (1880). (In 1903 the French authorities placed commemorative tablets on the houses occupied.

There are no works available for the Timbuktu collection.