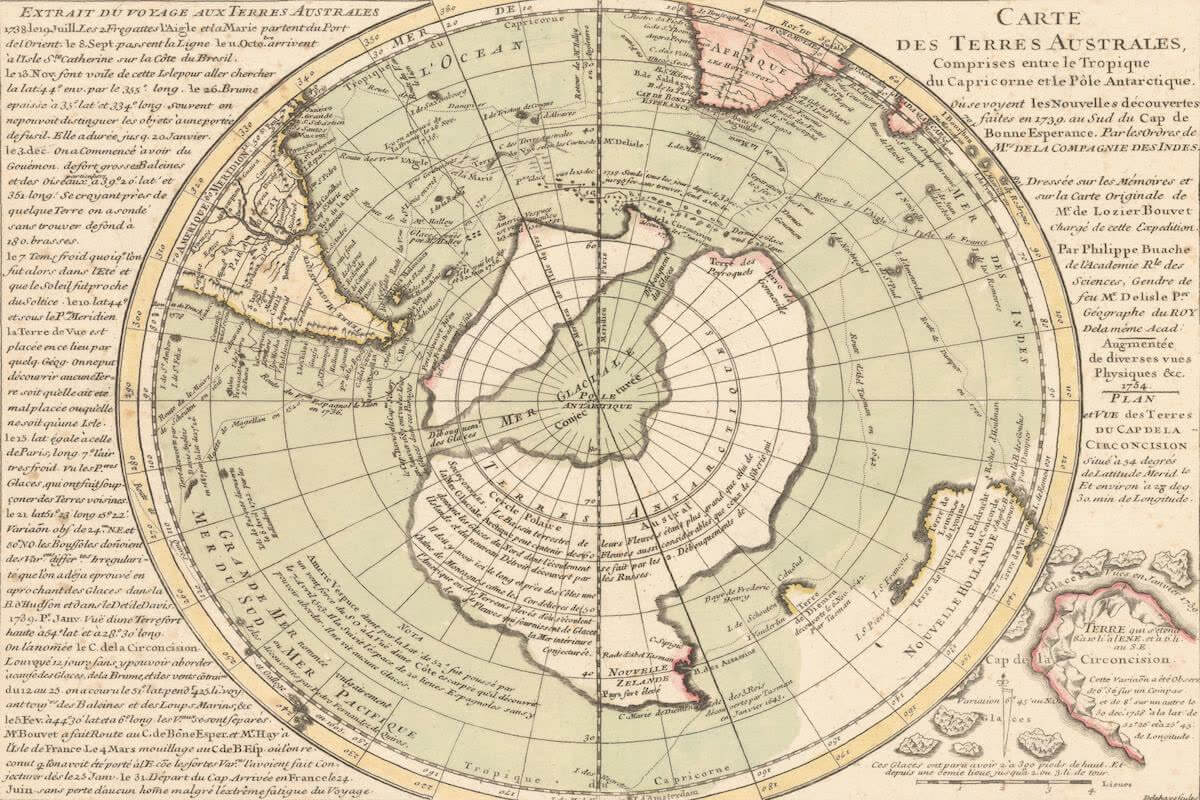 Terra Australis (Latin for South Land) was a hypothetical continent first posited in antiquity and which appeared on maps between the 15th and 18th centuries. Aristotle first speculated in Meteorologica Book II 5, "Now since there must be a region bearing the same relation to the southern pole as the place we live in bears to our pole...".

His ideas were later expanded by Ptolemy (2nd century AD), who believed that the Indian Ocean was enclosed on the south by land, and that the lands of the Northern Hemisphere should be balanced by land in the south. Marcus Tullius Cicero used the term cingulus australis ("southern zone") in referring to the Antipodes in Somnium Scipionis ("Dream of Scipio"). The land (terra in Latin) in this zone was the Terra Australis.

Legends of Terra Australis Incognita, an "unknown land of the South" date back to Roman times and before, and were commonplace in medieval geography, although not based on any documented knowledge of the continent. Ptolemy's maps, which became well known in Europe during the Renaissance, did not actually depict such a continent, but they did show an Africa which had no southern oceanic boundary (and which therefore might extend all the way to the South Pole), and also raised the possibility that the Indian Ocean was entirely enclosed by land. Christian thinkers did not discount the idea that there might be land beyond the southern seas, but the issue of whether it could be inhabited was controversial.

The first depiction of Terra Australis on a globe was probably on Johannes Schoner's lost 1523 globe on which Oronce Fine is thought to have based his 1531 double cordiform (heart-shaped) map of the world. On this landmass he wrote "recently discovered but not yet completely explored". The body of water beyond the tip of South America is called the "Mare Magellanicum," one of the first uses of navigator Ferdinand Magellan's name in such a context.

Schoner called the continent Brasiliae Australis in his 1533 tract, Opusculum geographicum. In it, he explained:

Brasilia Australis is an immense region toward Antarcticum, newly discovered but not yet fully surveyed, which extends as far as Melacha and somewhat beyond. The inhabitants of this region lead good, honest lives and are not Anthropophagi [cannibals] like other barbarian nations; they have no letters, nor do they have kings, but they venerate their elders and offer them obedience; they give the name Thomas to their children [after St Thomas the Apostle]; close to this region lies the great island of Zanzibar at 102.00 degrees and 27.30 degrees South.

Duo [cingulis] sunt habitabiles, quorum australis ille, in quo qui insistunt adversa vobis urgent vestigia, nihil ad vestrum genus ("Two of them [the five belts or zones that gird and surround the earth] are habitable, of which the southern, whose inhabitants are your antipodes, bears no relation to your people"). Alfred Hiatt, "Terra Australis and the Idea of the Antipodes", Anne M. Scott (ed), European Perceptions of Terra Australis, Ashgate Publishing, 2012, pp. 18-10.