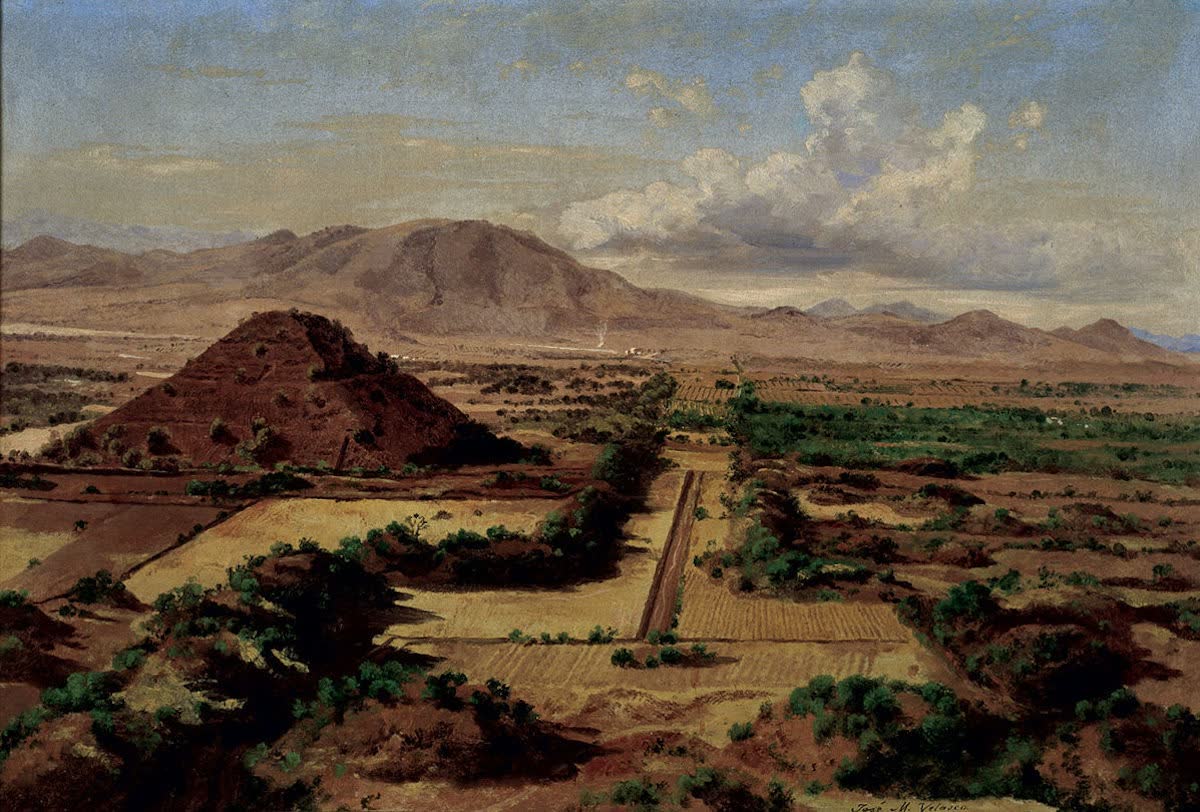 Teotihuacan is an ancient Mesoamerican city in the Valley of Mexico about 40 kilometers (25 mi) northeast of modern-day Mexico City. Teotihuacan is known today as the site of many of the most architecturally significant Mesoamerican pyramids built in the pre-Columbian Americas. However, these pyramids lay in ruin for many centuries and were not really explored. until relatively recently. The word "Teotihuacan" means the habitation of the gods. It is now a small village, though it was once a flourishing city, and the rival of Tula, the great Toltec capital.

The two principal pyramids were dedicated to Tonatiuh, the Sun, and to Meztli, the Moon. [1] The former is the larger, its height being 180 feet, and the length of the base 682 feet. Its platform is to-day about 75 feet square, and the middle point is marked by a modern cylindrical monument of stone, about 5 feet high and 6 feet in diameter. The summit of this pyramid is said to have been crowned with a temple, in which was a gigantic statue of its presiding deity, the Sun, made of one entire block of stone, and having a breastplate of gold and silver. Three terraces are now visible on this larger mound. It is constructed of blocks of basalt and trachyte rock.

About half a mile to the northward of the pyramid of the Sun is that dedicated to the Moon. The observer may distinguish two terraces on the latter. The summit is about 20 by 40 feet. Traces of an ancient tomb were formerly visible on it. A cross, standing on a pedestal about 12 feet high, has been erected recently [2] at the center of the platform. It is reached by a winding pathway on the south side. The building materials of this mound resemble those of the larger one. M. Charnay, a recent explorer, is said to have found an idol buried in the interior. The same traveler made a cut into this pyramid to settle the question whether the teocallis were hollow. [3] He dug a gallery half way through, and found the interior to be solid. We submit, however, that this experiment has not solved the problem in general.

A great number of smaller pyramids are seen around the two principal ones. Few exceed twenty-five feet in height. According to tradition, they were dedicated to the stars, and served as sepulchers for the illustrious men of the nation. The plain on which they are built was called Micoatl, or "Path of the Dead." Arrow-heads and fragments of blades of itztli or obsidian are still abundant at these mounds. They attest the warlike character of the aborigines. (Vide p. 174.)

[3] According to tradition these pyramids were hollow.

There are no works available for the Teotihuacan collection.