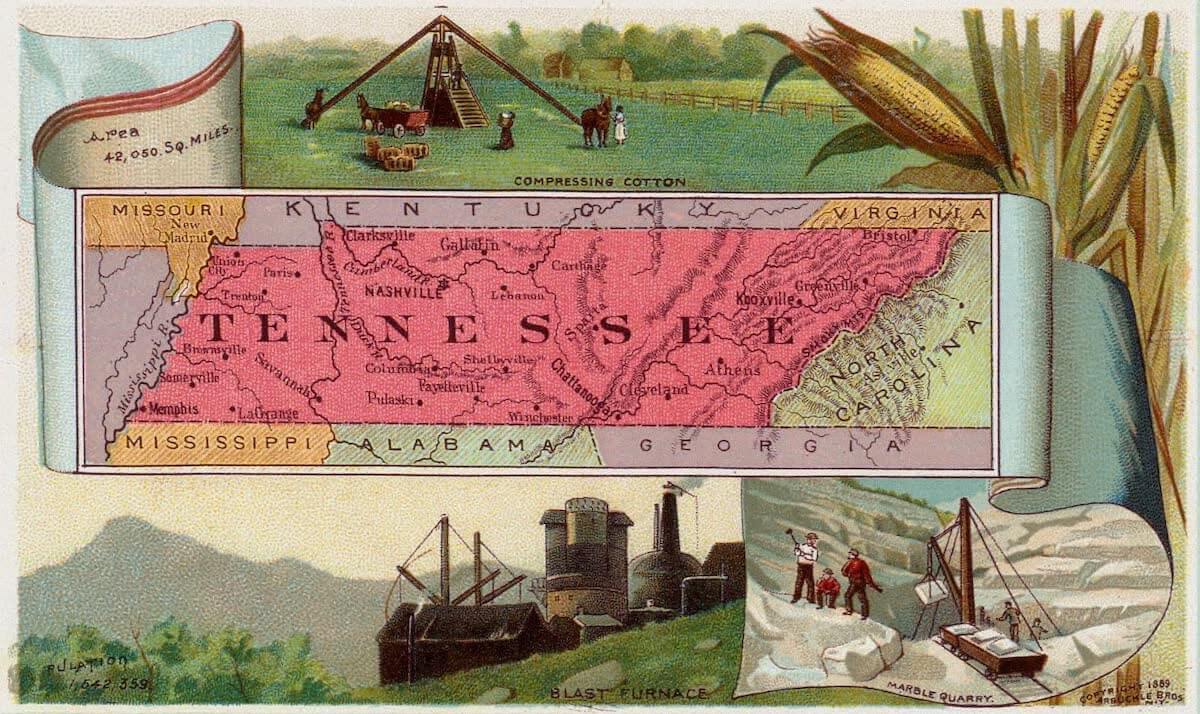 Tennessee, the third state admitted into the Union after the adoption of the Federal constitution. Its greatest length is 432 miles, its greatest breadth 109, and it covers 42,050 square miles. It is bounded on the north by Kentucky and Virginia, on the east by North Carolina, on the south by Georgia, Alabama and Mississippi and on the west by the Mississippi. Varying physical conditions divide Tennessee into sections. West Tennessee reaches from the Mississippi to Tennessee River; middle Tennessee stretches eastward to the middle of the Cumberland plateau; and eastern Tennessee covers the rest of the state.

Probably De Soto was the first white man to enter Tennessee. A settlement of North Carolinians, made in 1754, was broken up by the Indians. Two years later Fort Loudon was built on the Tennessee 30 miles from the site of Knoxville. The massacre of the garrison in 1760 was followed within a year by the defeat of the Indians and a treaty allowing settlements to be made.

At first a territory of North Carolina, the dissatisfied frontiersmen organized the state of Franklin, which lasted from 1785 to 1788, when it was put down by North Carolina. Tennessee was admitted as a state in 1796. The different capitals have been Knoxville, Kingston, Murfreesboro and Nashville, the present capital. The first railroad was the Memphis Railroad, chartered in 1831, when there were only 50 miles in the country; in 1910 there are 3,815 miles, mostly built since the war. There are 349 miles of electric lines. Tennessee seceded on June 8, 1861, and was readmitted in 1866. Many of the hardest-fought engagements of the war took place on Tennessee soil, as at Forts Henry and Donelson, Island No. 10, Murfreesboro, Chickamauga, Lookout Mountain, Franklin and Nashville. Population 2,184,789.

There also are lead and zinc mines, marble, kaolin, limestone and granite quarries, phosphate-rock, slate, copper, sandstone, petroleum and iron-ores. The eastern Tennessee valley separates the plateau from the Alleghanies, a belt seven to 28 miles wide including the Chilhowe, Great Smoky, Bald and Unaka ranges. The highest peak is Clingman's Dome (6,660 feet). Among the Cumberland Mountains are caverns many miles long, in which are powerful underground streams and bones of extinct animals. Elsewhere in Tennessee are mysterious sink-holes, through which the waters drain into underground streams. The chief rivers are the Tennessee, which twice crosses the state, the Cumberland, the Hoist on, the French Broad and the Big Hatchie.

Occupations. Agriculture is an important industry, and a variety of crops are produced. The leading crop is corn, but tobacco also is important. Other products are wheat, oats, potatoes, sorghum, peanuts and cotton. Fruit-trees and small fruits are grown, and stock-raising is also practiced. The presence of raw materials and the abundance of coal render manufacturing very important. The industries include iron and steel making, foundry and machine-shop products, the preparation of leather and tobacco, flour and lumber mills and the manufacture of textiles, cottonseed-oil and cake and clay-products. Iron is largely mined, and the pig-iron product is very valuable. Copper is quite extensively produced, and other lines of mining are zinc, lead, phosphate-rock, marble and building-stone.

Education. In several counties education is compulsory, and throughout the state it is illegal to give employment (in factory, mine or workshop) to children under 14. Separate schools are maintained for white and colored. The governor appoints a board of education and the superintendent of public instruction, who also is secretary of the board. There are county and city superintendents besides. There is an enrollment of 521,753 children, and more than 10,000 teachers are employed. The state maintains 3 normal schools and seven private normals are in operation. The University of Tennessee at Knoxville, opened in 1807; the University of Nashville at Nashville; Grant University at Chattanooga; the University of the South at Sewanee; Vanderbilt University at Nashville, endowed with $1,000,000 by Commodore Vanderbilt; and Fisk University at Nashville, for colored students are among the many colleges where higher education is provided. The state maintains several benevolent institutions, and many are provided by private and ecclesiastical charity.

There are no works available for the Tennessee collection.