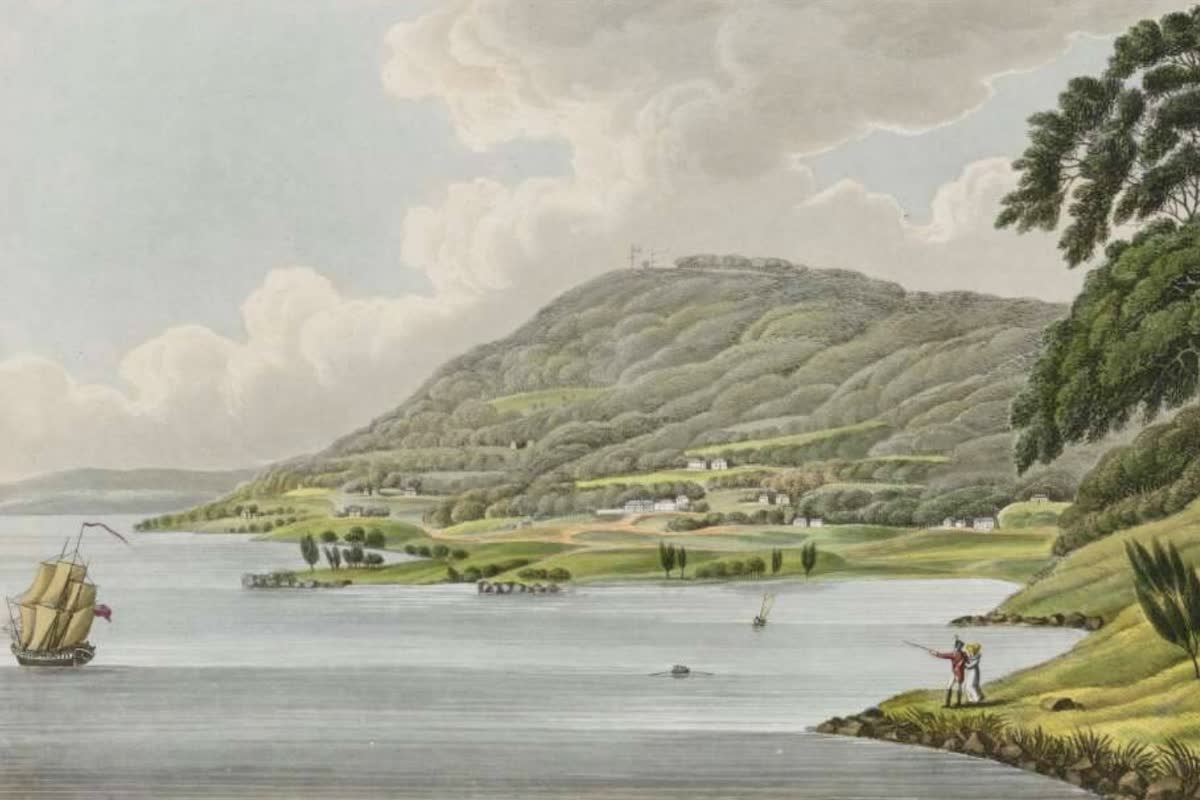 TASMANIA, formerly Van Diemen's Land, is a compact island, forming a British colony, which lies to the south of Australia, in the Southern Ocean. It has an area of 24,600 square miles (about three-fourths of the size of Ireland), and some fifty islets belong to it. Most of these lie between it and the southern shore of Victoria, in Bass's Strait. It is a land of mountain and flood, with picturesque scenery.

The centre is a mass of hills, generally covered with forest, with large lakes nearly 4000 feet above the sea; and this high land is continued to the west and north-west, while southward are other elevations. Ben Lomond in the east rises to a height of 5020 feet; in the north-west are Dry's Bluff (4257 feet) and Quamby (4000); while westward are Cradle (5069), Hugel (4700), Frenchman's Cap (4760), and Bischoff (2500). Wellington, near Hobart, is 4170 feet. Among the rivers flowing northward to Bass's Strait are the Tamar, Inglis, Cam, Emu, Blyth, Forth, Don, Mersey, Piper, and Ringarooma.

The Macquarie, receiving the Elizabeth and Lake, falls into the South Esk, which unites with the North Esk to form the Tamar at Launceston. Westward, falling into the ocean, are the Hellyer, Arthur, and Pieman. The King and Gordon gain Macquarie Harbour; the Davey and Spring, Port Davey. The central and southern districts are drained by the Derwent from Lake St Clair,—its tributaries being the Nive, Dee, Clyde, Ouse, and Jordan. The Huon falls into D'Entrecasteaux Channel. The chief mountain lakes are the Great Lake (50 miles in circuit), Sorell, St Clair, Crescent, and Echo.

The Dutch navigator Tasman sighted the island November 24, 1642, and named it Van Diemen’s Land, after the Dutch governor of Java. He took possession at Frederick Henry Bay in the name of the stadtholder of Holland, and then passed on to the discovery of Hew Zealand. The French Captain Marion in 1772 came to blows with the natives. Captain Cook was at Adventure Bay, to the south, in 1777. His companion, Captain Furneaux, had entered the bay four years previously, assuring Cook that Van Diemen's Land was joined to Hew Holland. Admiral Bruni d'Entrecasteaux, with the naturalist La Billardiere, entered the Derwent, calling it North Eiver, in 1792. Two years after, Captain Hayes named it Derwent.

Mr Bass and Lieutenant Flinders passed through Bass's Strait, and first sailed round the island, in 1798. The high terms in which they spoke of Sullivan's cove, at the mouth of the Derwent, afterwards led to the settlement of Hobart there. The French discovery ships, "Geographe" and " Haturaliste, " under Commodore Baudin, were off the coast in 1801-2. The island was settled from Sydney. A small party was sent to the Derwent, under Lieutenant Bowen, in 1803, and another to Port Dalrymple next year under Colonel Paterson, who was removed to Launceston in 1806. Captain Collins, who had been sent with a large number of convicts from England to form a penal colony in Port Phillip, thought proper to remove thence after three months, and establish himself at Hobart Town, February 1804.

The early days were trying, from want of supplies and of good government; and conflicts arose with the natives, which led to the celebrated Black War. In 1830 nearly all the settlers, with 4000 soldiers and armed constables, attempted to drive the aborigines into a peninsula, but caught only one lad. Mr George Bobinson afterwards succeeded in inducing the few hunted ones to surrender and be taken to Flinders Island. Deaths rapidly followed. The last man died in 1862, the last female in 1872. Bushranging was common for years in this scrubby land. The colony was subject to Hew South Wales till 1825, when independence was declared.

On free settlers being permitted to go to Van Diemen's Land, they endeavoured to get freedom of the press, trial by jury, and a popular form of rule. After long struggles, the liberties they sought for were gradually granted. A responsible government was the last boon received. Oppressed by the number of convicts thrown into the country, the free inhabitants petitioned again and again for the cessation of transportation, which was eventually allowed. Among the governors was Sir John Franklin, of polar celebrity.

The first newspaper, The Derwent Star, came out in 1810. Literature advanced from that humble beginning. At first the Government entirely supported schools and churches, and for many years state aid was afforded to the Church of England, Presbyterian, Wesleyan, and Roman Catholic churches, but this aid is now withdrawn. The island proving too small for a large population, numbers swarmed off to the neighbouring settlements, and Port Phillip, now Victoria, received its first inhabitants from Tasmania, Though not so prosperous as Victoria, the little island enjoys an amount of ease and comfort which few, if any, settlements elsewhere have been known to experience.