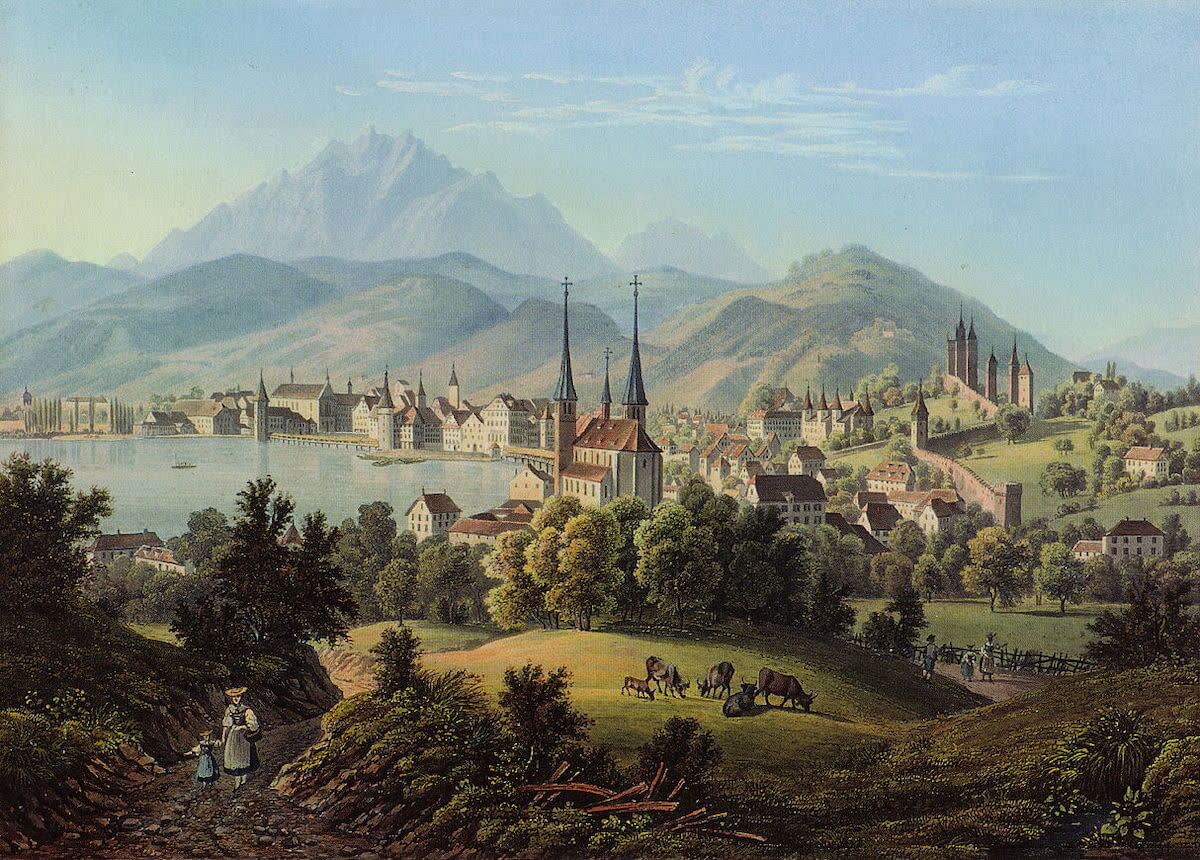 Switzerland is a republic of Central Europe, bounded by Germany (N.), France (W.), Italy (S.), and Austria and Germany (E.); in size is slightly more than one-half of Scotland, of semicircular shape, having the Jura Alps on its French border, and divided from Italy by the great central ranges of the Alpine system, whence radiate the Swiss Alps—Pennine, Lepontine, Bernese, &c.—covering the E. and S., and occupying with intervening valleys two-thirds of the country.

The remaining third is occupied by an elevated fertile plain, extending between Lakes of Constance and Geneva (largest of numerous lakes), and studded with picturesque hills; principal rivers are the Upper Rhône, the Aar, Ticino, and Inn; climate varies with the elevation, from the high regions of perpetual snow to warm valleys where ripen the vine, fig, almond, and olive; about one-third of the land surface is under forest, and one quarter arable, the grain grown forming only one-half of what is required; flourishing dairy farms exist, prospered by the fine meadows and mountain pastures which, together with the forests, comprise the country's greatest wealth; minerals are exceedingly scarce, coal being entirely absent.

Despite its restricted arable area and lack of minerals the country has attained a high pitch of prosperity through the thrift and energy of its people, who have skilfully utilised the inexhaustible motive-power of innumerable waterfalls and mountain streams to drive great factories of silks, cottons, watches, and jewellery. The beauty of its mountain, lake, and river scenery has long made Switzerland the sanatorium and recreation ground of Europe; more than 500 health resorts exist, and the country has been described as one vast hotel.

The Alpine barriers are crossed by splendid roads and railways, the great tunnels through St. Gothard and the Simplon being triumphs of engineering skill and enterprise. In 1848, after the suppression of the Sonderbund, the existing league of 22 semi-independent States (constituting since 1798 the Helvetic Republic) formed a closer federal union, and a constitution (amended in 1874) was drawn up conserving as far as possible the distinctive laws of the cantons and local institutions of their communes.

Government. The President is elected annually by the Federal Assembly (which consists of two chambers constituting the legislative power), and is assisted in the executive government by a Federal Council of seven members. By an institution known as the “Referendum” all legislative acts passed in the Cantonal or Federal Assemblies may under certain conditions be referred to the mass of the electors, and this is frequently done. The public debt amounts to over two million pounds.

Army. The national army is maintained by conscription; 71 per cent. of the people speak German, 22 per cent. French, and 5 per cent. Italian; 59 per cent. are Protestants, and 41 per cent. Catholics.

Education is splendidly organised, free, and compulsory; there are five universities, and many fine technical schools.