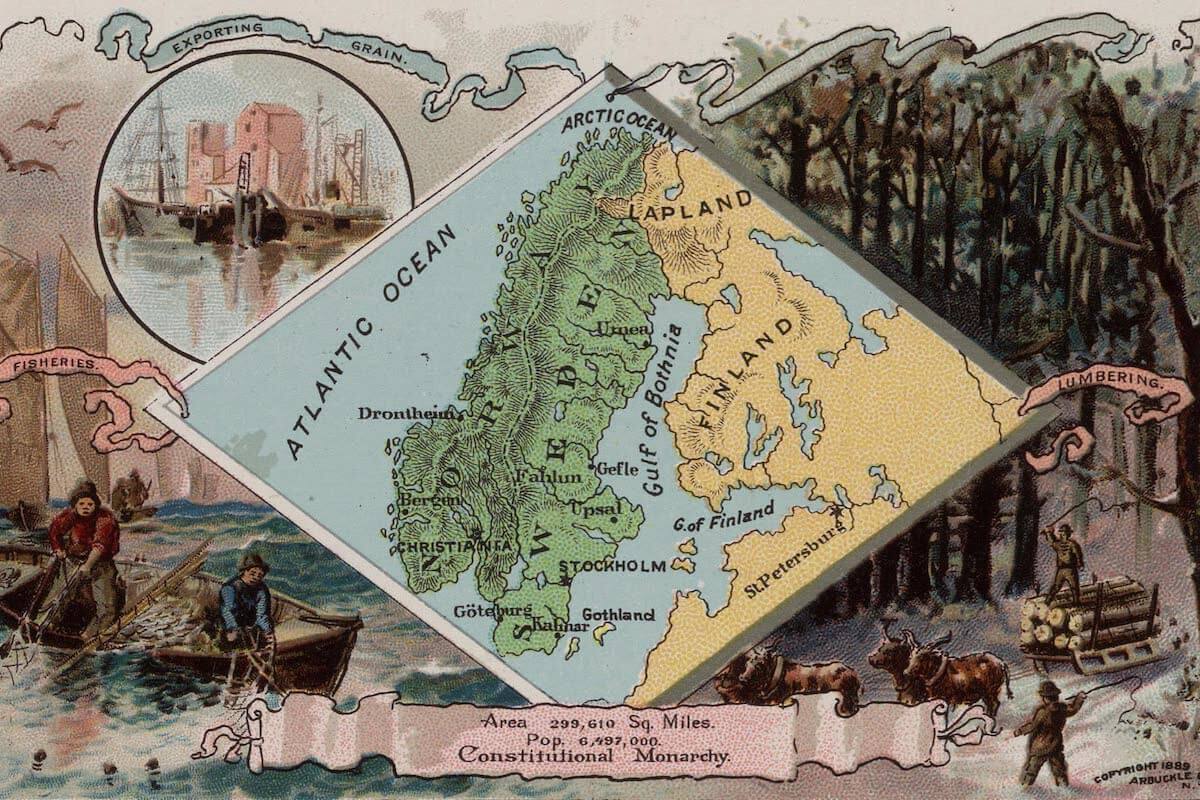 Sweden, the eastern portion of the Scandinavian peninsula, is a kingdom. It is over 600 miles long, its greatest width is 200 miles; and it covers 172,876 square miles. In early times the Swedes lived in the north of Sweden and the Goths in the south. Eric Edmundson is said to have first conquered the whole of Sweden near the end of the 9th century.

At this time Swedish history begins, and we find the Swedes generally at war with their Norwegian and Danish neighbors and busily ravaging the eastern shores of the Baltic. In 1000 A. D. Olaf Schooszkönig was baptized a Christian, and the burning of the national temple at Upsala in the reign of Ingiald (1080-1112) finished the overthrow of the old pagan religion. The murder of King Eric in 1161 was the beginning of a disastrous period of civil wars, lasting 200 years. At length the nobles offered the throne to Margaret, queen of Denmark and Norway, thus uniting the three Scandinavian countries in 1347.

In 1523 Gustavus Vasa made Sweden again independent of Denmark, founded a long line of Swedish kings, of which he himself was one of the greatest, and raised half-barbarous Sweden to an honorable place among civilized nations. In Vasa's reign Protestantism was made the state's religion. Gustavus Adolphus (1611-32), one of the greatest generals of his age, spent the greater part of his reign in wars with Poland and Russia for the possession of Ingria, Livonia and other Baltic districts and in defending Protestantism in Germany.

His affairs at home were ably managed by the wise Oxenstierna, who, after the death of Gustavus at the battle of Lützen, carried on the government during the minority of Christina. This strange queen's most popular act was her abdication. Carl XI (1660-97) so greatly increased the kingly power that the diet acknowledged it to be absolute. The warlike career of gifted but reckless Carl XII (1697-1718), who humbled Frederick IV of Denmark and Peter the Great of Russia and dethroned Augustus II of Poland, nearly ruined his country. Ulrica, his sister was chosen queen on condition of giving up the absolute power wielded by the last two kings.

In the reign of Ulrica the last of the Vasas, and of her husband Frederick of Hesse-Cassel, the country was divided into two factions of nobles—the Hats or French party and the Caps or Russian party. Gustavus III (1771-2) who recovered the lost power of the crown and put down these factions, was murdered. Carl XIII (1809-18) was forced to cede Finland to Russia. Carl was childless and chose Bernadotte, Napoleon's general and prince of Pontecorvo, as crown-prince. Bernadotte's success in getting possession of Norway endeared him to the people, and he ascended the throne in 1818 as Carl XIV. He ruled ably, and was succeeded by his son Oscar I (1844-59) and his grandsons Carl XV (1859-72) and Oscar II (1872-1907). Gustav V, the present king, succeeded in 1907. In 1905 Norway dissolved the union with Sweden. Population 5,476,441.

Surface. In the northern parts the land rises from the Gulf of Bothnia to the Kiölen Mountains, which form the boundary between Sweden and Norway, their highest peaks rising above the snow-line. South of this region is the mountainous district made up of the great table-lands of Jemtland and the valleys of Herjedal and Ljungan, where there are good pasturage and timber-lands. The mountainous region further south, from Lake Siljan to Lake Wener, is the mining part of Sweden, and includes the noted iron-mines of Danemora and the copper-works of Fahlun. Lakes Wener, Malar and Hielmar almost cut the country from east to west and, with Lake Wetter, make up a large lake-district, which is the commencement of the most fertile part of Sweden, the lower end of the peninsula between the Cattegat and the Baltic. The lakes cover one eighth of the surface; the largest is Lake Wener, the outlet of which to the Cattegat is the Göta, noted for its picturesque rapids. The rivers are small and unimportant, the largest being the Angerman. Summer and winter succeed each other with almost no spring or fall.

Resources. Usually not enough grain is grown to supply the home-market, though barley does better than oats or rye. Other crops are potatoes, hemp, flax, tobacco and hops. Pine, fir and beech are of great value for timber, tar, pitch, charcoal and firewood. These trees mainly make up the great forests which cover more than a fourth of the surface. Bears and beavers are scarce; but wolves, lynxes, martens, eagles etc. are common. Copper, iron, alum, vitriol, marble, lead, sulphur and a little coal, gold and silver are found; mining is the most important business after farming. Iron and shipbuilding head the list of manufactures. Iron, timber and copper are the chief exports; yarn, wool, leather, coal and cotton the main imports.

Government. The three provinces are Norrland, Svealand and Gothland, but for purposes of government it is divided into 25 governments. After Stockholm the capital (341,986), the largest city, is Göteborg (167,813). The Swedish permanent army of 100,000 men is in part quartered on the landowners, the soldiers working in time of peace as field-laborers in return for their support; in time of war they are paid by the crown. Every Swede between 20 and 25 must serve in the national guard, and a reserve of 284,200 men is formed of conscripts between 21 and 40. Sweden is a constitutional and hereditary monarchy, the succession being in the male line. The king has a council or cabinet of ten ministers. The diet meets every year; the upper house has 150 members chosen for nine years, who must have a certain amount of landed property or income; the lower house has 230 members. A small property qualification is required in the voter, who must be a native having attained his majority.

Education. Education is compulsory, and there are free schools. The University of Upsala was founded in 1476, and has 1,835 students; and the smaller University of Lund numbers 874 students. There are 113 high schools with nearly 25,000 pupils, and 14 normal schools with 1,437 pupils. The state church, to which the king must belong, is the Lutheran; but no civil disabilities attach to those not of the national religion.