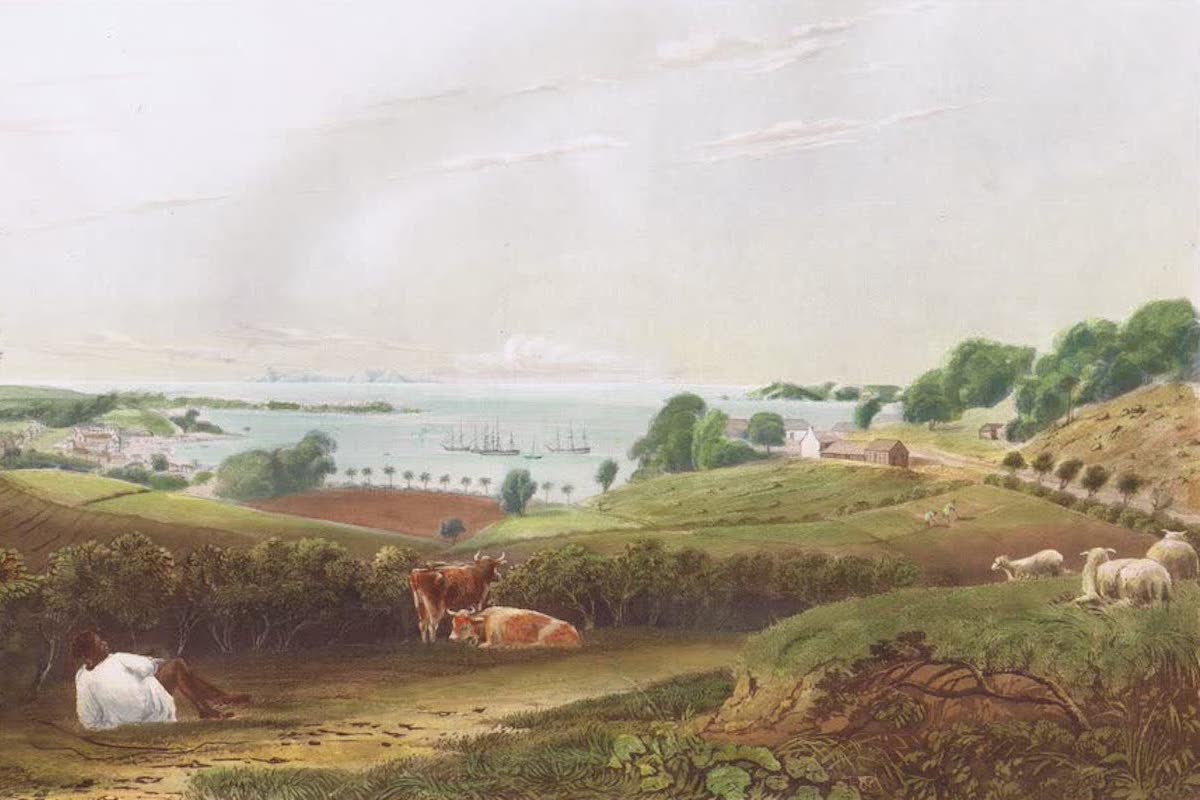 ST VINCENT, one of the British Windward Islands in the West Indies, lying about 13° 15' N., 61° 10' W., west of Barbados and south of St Lucia. It is about 18 m. long by 11 in extreme width, and has an area of 140 sq. m. A range of volcanic hills forms the backbone of the island; their slopes and spurs are beautifully wooded, and the valleys between the spurs are fertile and picturesque.

The culminating point is the volcano called the Soufrière (3 500 ft.) in the north, the disastrous eruption of which in May 1902 devastated the most fertile portion of the island, a comparatively level tract lying to the north, called the Carib Country (see below). The climate of St Vincent is fairly healthy and in winter very pleasant; the average annual rainfall exceeds 100 in., and the temperature ranges from 88° F. in August to 66° in December and January. Hurricanes are not uncommon. The capital of the island is Kingstown, beautifully situated on the south-west coast near the foot of Mount St Andrew (2600 ft.).

The present constitution dates from 1877, when the legislative council, consisting of four official and four nominated unofficial members, was formed. In 1899 an important scheme was entered upon, by means of a grant of £15,000 from the Imperial treasury, for settling the labouring population, distressed by the failures of the sugar industry, in the position of peasant proprietors. Estates were acquired from private owners for this purpose, and besides this a number of small holdings on crown lands (which are situated mainly in the high-lying central parts of the island) have been sold. Education is carried on in 27 state-aided schools, and there are at Kingstown a grammar school and an agricultural school. The Anglican, Wesleyan and Roman Catholic churches are well represented, and there are some Presbyterians.

St Vincent is generally stated to have been discovered on St Vincent's day, the 22nd of January 1498 by Columbus. Its Carib inhabitants, however, remained undisturbed for many years. In 1627 Charles I. granted the island to the earl of Carlisle; in 1672 it was re-granted to Lord Willoughby, having been previously (1660) declared neutral. In 1722 a further grant of the island was made, to the duke of Montague, and now for the first time a serious effort at colonization was made, but the French insisted on the maintenance of neutrality, and this was confirmed by the treaty of Aix-la-Chapelle (1748).

In 1762, however, General Monckton captured the island; the treaty of Paris in 1763 confirmed the British possession, and settlement proceeded in spite of the refusal of the Caribs to admit British sovereignty. Recourse was had to arms, and in 1773 a treaty was concluded with them, when they were granted lands in the north of the island as a reserve. In 1779 the island was surrendered to the French, but it was restored to Britain by the treaty of Versailles (1783). In 1795 the Caribs rose, assisted by the French, and were only put down after considerable fighting by Sir Ralph Abercromby in 1796, after which the majority of them were deported.

The emancipation of black slaves in the island took place in 1838; in 1846 the first Portuguese labourers were introduced, and in 1861 the first East Indian coolies. St Vincent suffered from a terrific hurricane in 1780, and the Soufrière was in eruption in 1821. Severe distress was occasioned by the hurricane of the 11th of September 1898, from which the island had not recovered when it was visited by the eruption of the Soufrière in 1902. This eruption was synchronous with that of Mont Pelé in Martinique. There had been signs of activity, since February 1901, but the most serious eruption took place on the 6th/7th of May 1902. There were earthquakes in the following July, and further eruptions on the 3rd of September and the 15th of October, and on the 22nd of March 1903. Many sugar and arrowroot plantations were totally destroyed, and the loss of life was estimated at 2000. A Mansion House Fund was at once started in London for the relief of the sufferers, and subscriptions were sent from all parts of the civilized world, and notably from the United States.

There are no works available for the St. Vincent collection.