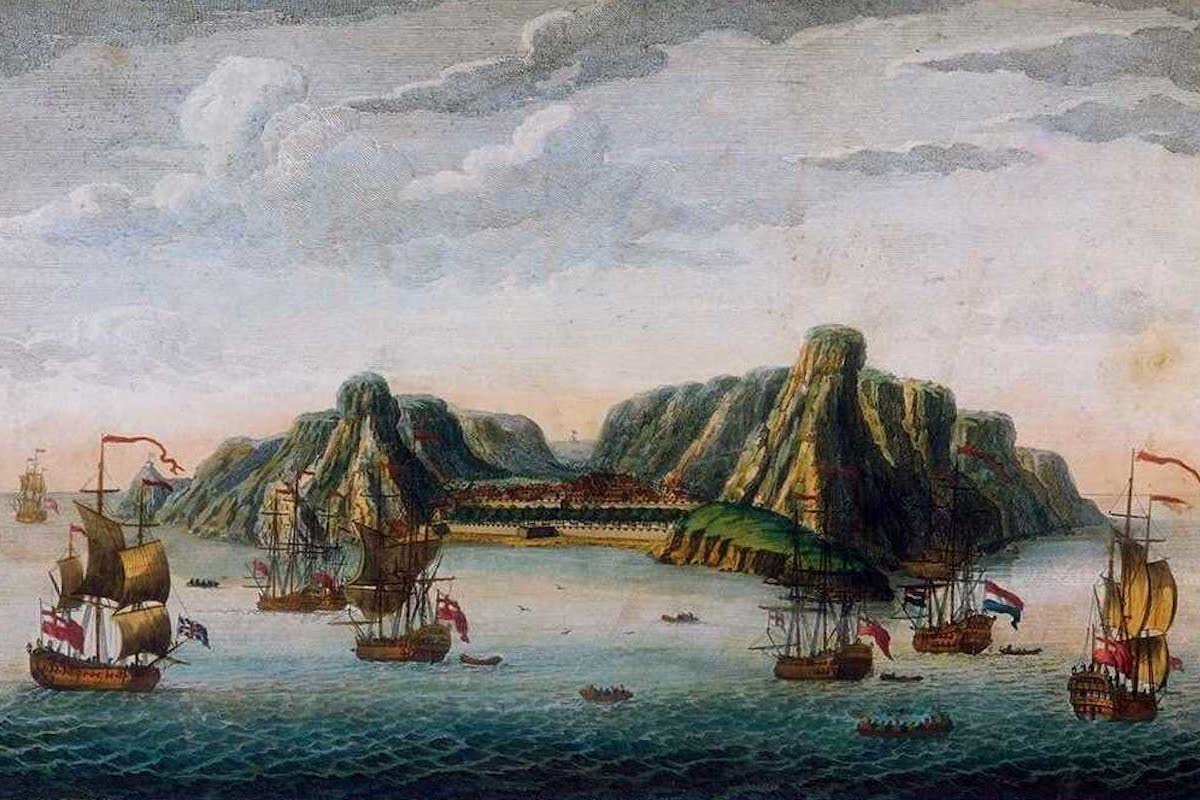 The island is a very ancient volcano, greatly changed by oceanic abrasion and atmospheric denudation. The northern rim of the great crater still forms the principal ridge, with the culminating summits of Diana’s Peak (2704 feet) and High Peak (2635); the southern rim has been altogether washed away, though its debris apparently keeps the sea shallow (from 20 to 50 fathoms) for some 2 miles south-east of Sandy Bay, which hypothetically forms the centre of the ring. From the crater wall outwards water-cut gorges stretch in all directions, widening as they approach the sea into valleys, some of which are 1000 feet deep, and measure one-eighth of a mile across at bottom and three-eighths across the top (Melliss).

Along the enclosing hill-sides caves have been formed by the washing out of the softer rocks. High Hill (2823 feet) and High Knoll (1903) are lateral cones. Many dykes and masses of basaltic rock seem to have been injected “subsequently to the last volcanic eruptions from the central crater.” Among the more remarkable instances are the Ass?s Ears and Lot?s Wife, picturesque pinnacles standing out on the south-east part of the crater ridge, and the Chimney on the coast to the south of Sandy Bay.

In the neighbourhood of Man and Horse (south-west corner of the island), throughout an area of about 40 acres, scarcely 50 square yards exist not crossed by a dyke. On the leeward side of St Helena the sea-face is generally formed by cliffs from 600 to 1000 feet high, and on the windward side these heights often increase to full 2000 feet, as at Holdfast Tom, Stone Top, and Old Joan Point. Limited deposits of calcareous sandstones and stalagmitic limestones occur at certain points, as on Sugar-Loaf Hill; they probably consist of particles of shells blown by the wind from some primeval beach, long since destroyed.

As regards its vegetation, St Helena is divided into three zones,—(1) the coast zone, extending inland for a mile to a mile and a half, formerly clothed with a luxuriant vegetation, but now “dry, barren, soilless, lichen-coated, and rocky,” with little save prickly pears, wire grass, and Mesembryanthemum; (2) the middle zone (400- 1800 feet), extending about three-quarters of a mile inland, not so rocky, with shallower valleys and grassier slopes, the English broom and gorse, brambles, willows, poplars, Scotch pines, &c., being the prevailing forms; and (3) the central zone, about 3 miles long and 2 wide, the last refuge for the most part of that marvellous flora which has been for generations the admiration and sorrow of the botanist. According to Mr W. B. Helmsley (who has summarized all that is known on the matter in his report on the botany of the Atlantic Islands),[1] the certainly indigenous species of plants are 65, the probably indigenous 24, and the doubtfully indigenous 5; total 94. Of the 38 flowering plants 20 are shrubs or small trees. With the exception of Scirpus nodosus, all the 38 are peculiar to the island; and the same is true of 12 of the 27 vascular cryptogams (a remarkable proportion). Since the flora began to be studied, two species—Melhania melanoxylon and Acalypha rubra—are known to have become extinct; and at least two others have probably shared the same fate—Heliotropium pennifolium and Demazeria obliterata. Melhania melanoxylon, or “native ebony,” once abounded in parts of the island now barren; but the local legislation decided that goats were of more value than ebony. Its beautiful congener Melhania erythroxylon (“redwood”) was still tolerably plentiful in 1810, but is now reduced to a few specimens. Very rare, too, has become Pelargonium cotyledonis, called “Old Father Live-for-ever,” from its retaining vitality for months without soil or water. Commidendron robustum (“gum wood”), a tree about 20 feet high, once the most abundant in the island, was represented in 1868 by about 1300 or 1400 examples; and Commidendron rugosum (“scrubwood”) is confined to somewhat limited regions. Both these plants are characterized by a daisy- or aster-like blossom, which looks very strange on a tree. In general the affinities of the indigenous flora of St Helena were described by Sir Joseph Hooker as African, but Mr Bentham points out that the important element of the Compositæ shows, at least in its older forms, a connexion rather with South America. The exotic flora introduced from all parts of the world gives the island almost the aspect of a botanic garden. The oak, thoroughly naturalized, grows alongside of the bamboo and banana. As contributing largely to the general physiognomy of the vegetation must be mentioned—the common English gorse; Rubus pinnatus, probably introduced from Africa about 1775; Hypochæris radicata, which above 1500 feet forms the dandelion of the country; the beautiful but aggressive Buddleia madagascariensis; Physalis peruviana; the common castor-oil plant; and the pride of India. The peepul is the principal shade tree in Jamestown, and in Jamestown valley the date-palm grows freely. Orange and lemon trees, once common, are now scarce. The attempt (1869–71) to introduce cinchona cultivation failed. Potatoes are probably the staple production of the St Helena farmers, and as many as three crops per annum are sometimes obtained.

The fauna of St Helena is only second in interest to its flora. Besides domestic animals the only land mammals are rabbits, rats, and mice, the rats being especially abundant and building their nests in the highest trees. Probably the only endemic land bird is the wire bird, Ægialitis sanctæ helenæ; the averdevat, Java sparrow, cardinal, ground-dove, partridge (possibly the Indian chukar), pheasant, and guinea-fowl are all common. The pea-fowl, at one time not uncommon in a wild state, is long since exterminated. Though fresh water abounds in the island in the form of springs, rivulets, and streams, there are no freshwater fish, beetles, or shells. Of sixty-five species of sea-fish caught off the island seventeen are peculiar to St Helena; economically the more important kinds are gurnard, eel, cod, mackerel, tunny, bullseye, cavalley, flounder, hog-fish, mullet, and skulpin. Mr Wollaston, in Coleoptera Sanctæ Helenæ, 1877, shows that out of a total list of 203 species of beetles 129 are probably aboriginal and 128 peculiar to the island,—an individuality perhaps unequalled in the world. More than two-thirds are weevils and a vast majority wood-borers, a fact which bears out the tradition of forests having once covered the island. The Hemiptera and the land-shells also show a strong residuum of peculiar genera and species. A South-American white ant (Termes tenuis, Hagen.), introduced from a slave-ship in 1840, soon became a real plague at Jamestown, where a considerable portion of the public library fell a prey to its voracity. The honey-bee, which throve for some time after its introduction, again died out. (Comp. Wallace, Island Life.)

The population of St Helena was 6444 in 1871 and 5059 (2617 males, 2442 females) in 1881; it consists of Government officials, of old-established residents (“yamstalks”) of somewhat composite origin, European and Asiatic, and of the descendants of Negroes landed from the West African slave-ships subsequent to 1840. The only town Jamestown (3000 inhabitants) lies in a deep valley on the north-west coast, and there is a village in the neighbouring Rupert’s Valley. Ladder Hill, the seat of the garrison, is so called from the almost precipitous ladder-like wooden stair by which its height of 600 feet can be scaled. Longwood, where Napoleon died in 1821, is a farmhouse in an elevated plain (2000 feet high), about 3 miles inland from Jamestown.

St Helena was discovered by the Portuguese navigator João da Nova on the 21st of May 1501. The island received its first known inhabitant in 1513 in the person of Fernandez Lopez, a Portuguese of good family, who preferred being marooned to returning to Europe after the barbarous mutilation to which he had been subjected for some misdemeanour. Cavendish (1588), Kendall (1591), and Lancaster (1593) were the earliest English visitors. The Dutch, who had for some time been in possession of the island, withdrew in 1651, but on two occasions (1665 and 1673) managed to expel the forces of the English East India Company, which had at once seized the abandoned prize. The company, having procured a second charter of possession on 16th December 1673, remained the governing authority till 22d April 1834, when St Helena passed into the hands of the British crown. In 1832 it had purchased the freedom of the slaves (614) for £28,062. As a port of call the island continued to prosper till the opening of the Suez Canal, which, by altering the route to the East Indies, deprived the people of their means of subsistence. The revenue has decreased from £13,931 in 1874 to £10,421 in 1884, the expenditure from £14,521 to £10,806, the value of imports from £53,874 to £41,816, and of exports from £4006 to £1436. Halley the astronomer in 1676 left his name to Halley’s Mount; and Maskelyne and Waddington visited the island in 1761.