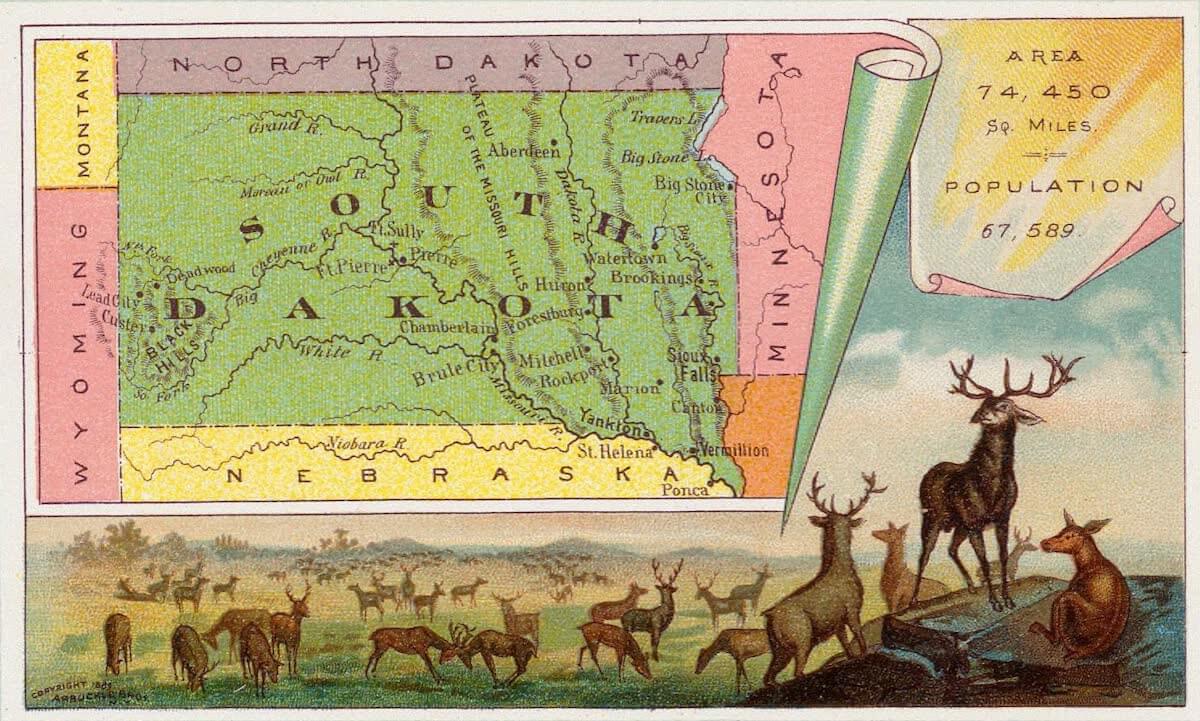 In 1828-30 a fort was erected at Pierre, which was subsequently sold to the Federal government. Late in the fifties settlement began at Sioux Falls and in the territory to the eastward, while Yankton became the territorial capital in 1863, which was removed 20 years later to Bismarck and, in 1889, to Pierre. An impetus was given to settlement by the construction of railroads, begun about 1872, and by the Custer discovery of gold in 1874 in the Deadwood district and the region of the Black Hills. The movement for statehood dates about from 1883, though it was not until 1889 that the state, and with it North Dakota, was admitted into the Union with a constitution of its own. Indian reservations were further opened to settlement in the nineties.

Surface and Climate. The state has a dry, bracing climate, with a mean annual temperature of 44.3° F., the warm chinook winds tempering the extreme cold and blizzards of winter. It has a light snowfall in winter and an average annual rainfall, especially in the settled and fertile eastern section, where farming is chiefly carried on. In the west much of the state is not only treeless, save in the region of the Black Hills, but is infertile, being for the most part covered with igneous rocks and coarse gravel.

Manufactures. South Dakota is fast developing into a manufacturing state, having in 1909 over 1000 industrial establishments, with an aggregate capital of $13,018,000, the wage-earners numbering 3,602 and the total value of products being $17,870,000, a third of which was yielded by the flour and grist mills, in addition to the output of factory-made butter. The value of the latter in 1909 was about $2,200,000, and the value of the printing and publishing industries was $1,976,000. Sioux Falls is one of the chief industrial centers.

Commerce and Transportation. In 1910 the mileage of the state's railroads exceeded 3,947 miles, the chief lines on the east side of the Missouri being the Chicago, Milwaukee and St. Paul, the Chicago and Northwestern and the Great Northern. The Black Hills region, in the southwest, with its principal mining towns of Lead City, Deadwood and Rapid City, is reached from railroads extending northward from Nebraska. The Missouri also is a chief artery of transportation. Banking facilities are good, there being 102 national banks in 1911, with an aggregate capital of over four million dollars and individual deposits exceeding 27 millions. There were, besides, 502 state banks, with a combined capital of nearly $7,000,000, and over 43 millions of deposits. The assessed valuation of property (both realty and personal) in 1911 was close upon 338 millions, showing an increase of over one hundred millions in five years. In 1911 the state had no bonded debt.

Education. In 1910 the total expenditure for public schools in South Dakota exceeded four millions, nearly two millions being expended for teachers salaries. Of the 167,020 of school population in 1910 about 126,253 were enrolled, though the average daily attendance was but 80,032. Besides state normal schools located at Madison, Springfield, Aberdeen and Spearfish, there are an agricultural college at Brookings and a school of mines at Rapid City. In the larger towns there are high schools. Higher education is represented by the following universities and denominational colleges: the University of South Dakota at Vermilion; Dakota Wesleyan University (Meth. Epis.) at Mitchell with 27 instructors and 375 students; Yankton College (Cong.) with 23 instructors and 224 students; Huron College (Presb.); Redfield College (Cong.); Sioux Falls College (Baptist); and Mennonite College at Freeman. Besides these institutions there are reformatory and penitentiary schools maintained by the state, schools for the blind and for deaf-mutes and asylums and hospitals for the insane.

There are no works available for the South Dakota collection.