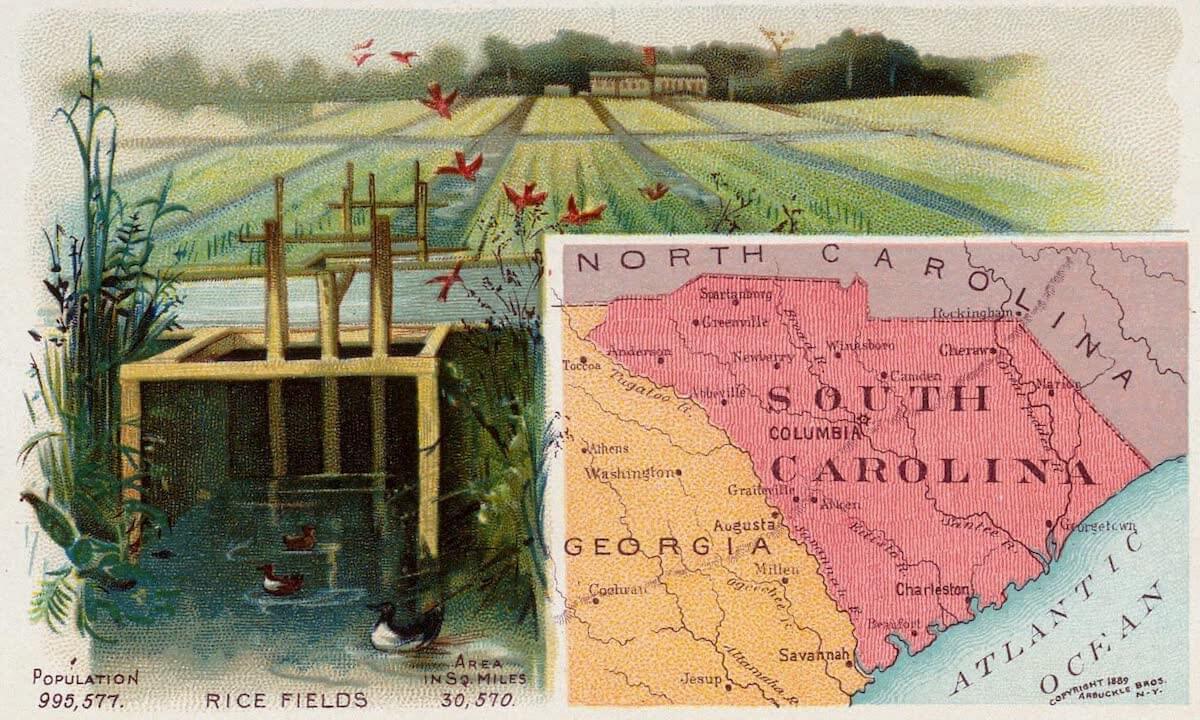 South Carolina, one of the original states of the American Union, popularly known as the Palmetto State, lies between North Carolina on the north, North Carolina and the Atlantic on the east, the Atlantic and Georgia on the south and Georgia on the west. It is shaped like a triangle. Its area is 33,393 square miles, and there are 41 counties. Population 1,515,400. Capital: Columbia (26,319). Chief cities: Charleston (58,833); Greenville (15,741); and Spartanburg (17,517).

South Carolina was claimed by France, England and Spain either by right of conquest, purchase or discovery; but the first settlement on the soil was made by French Huguenots in 1562 near Beaufort. This colony was a failure. The first permanent settlement was made by the English in 1670 on Ashley River near Charleston. Two hundred Negro slaves were brought from Barbadoes in 1671, and since 1820 the Negro population has exceeded the white. In 1685 a large number of French Huguenots settled in South Carolina, and later German, Irish, Scotch and Welsh immigrants arrived.

In 1729 George II divided the region into North and South Carolina. At first the government was in the hands of noblemen who appointed the governor under a constitution prepared by John Locke of England. Locke's constitution was poorly suited to the needs of the colony, and there was constant friction between the people and the governors. In 1719 proprietary government was abolished, and the colony was ruled by a governor and council appointed by the king and an assembly elected by the people. Prosperity began, and lasted until the beginning of the Revolution. In early years the colony suffered from Indian raids, but finally all the Indians except the Catawbas were driven out. These Indians still have a small reservation on Catawba River. Less than a hundred survive.

In 1774 the first act was passed to oppose royal usurpation by force, and in the following year the first military force was raised for defense of the colony against the English government, and the importation of British goods was prohibited. The first important victory of the Revolutionary War was won at Fort Moultrie, June 28, 1776. Later, Charleston was captured and made the British headquarters in the south, Ninety-Six and Camden were taken, and, but for the resistance of Marion and Sumter, the state would have been conquered. The tide turned at King's Mountain, severe battles were fought at Cowpens and Eutaw Springs and the British were driven back until they held only Charleston.

When the government under the Federal constitution had been established, South Carolina, under the direction of John C. Calhoun, soon became the leading exponent of state-sovereignty. The nullification act was passed in 1833, by which South Carolina declared the United States tariff null and not binding upon her citizens. The act was approved by the governor, but President Jackson pronounced it treason. The state-sovereignty contention almost precipitated war in 1833, and finally led to the Civil War in 1861-5.

The state suffered heavily during the war, and worse during the reconstruction days which followed — a period of misrule and demoralization. The slaves already in the majority were made citizens. The better class of white people were not allowed to participate in the government. This state of affairs continued until 1876, when Gen. Wade Hampton was elected governor. Then the present era of prosperity began. In 1895 a new constitution was adopted, which required an educational or property qualification for citizenship. The right of suffrage belongs only to men 21 years old who can read and write and to men who, though they cannot read and write, own $300 worth of property. This law disfranchises a great number of ignorant and thriftless people. As there are more colored than white men disqualified, white voters are in the majority.

Surface. The state consists of two distinct belts, the coastal plain and the Piedmont plateau, and is naturally divided into sections known locally as low country and up-country. The&a sections are separated by high sand-hills parallel to the coast and the mountains, forming the head of navigation on all the principal rivers. The coastal plain itself is what is called a belted coastal plain, being divided according to form, soil and vegetation into four belts parallel to the shore line: The coastal belt; the lower pine-belt; the upper pine-belt; and the hill-belt. Above the sandhills are the Piedmont region, which stretches to the foot of the mountains, and the Alpine region, which begins at the foot-hills of the Appalachian Mountains and occupies the northwest corner. The Alpine region ranges from 900 to 3,000 feet in altitude. Mount Pinnacle in Pickens County, the highest point in the state, is 3,436 feet above sea level.

Rivers. The main river-systems are the Pedee, the Santee and the Savannah. These rise in the Appalachian region of North Carolina, and are navigable to the falls' line. Between the Santee and the Savannah system are the minor river-systems, which include Ashley, Cooper, Edisto and Combahee Rivers. The Ashley and Cooper, which are arms of the sea rather than rivers, unite in forming Charleston harbor.

Climate. The climate is equable and healthful, except in swampy portions near the coast. The summer's heat is tempered by the influence of the mountains in the northwest and by the sea-breezes in the southeast. The mean annual temperature is 63° F. The annual rainfall is 48.70 inches. The mountains in the higher part of the state are pleasant summer-resorts, while the dry, bracing atmosphere and the long-leaf pine-forests of the sand-hills make that section an ideal winter-home for invalids and pleasure-seekers.

Resources. The field and forest products are more varied, perhaps, than those of any other state. There is a variety of climate from the coast, where the sea is tempered by the Gulf-Stream, to the mountains, where it is too cold for cotton to mature. The products range from oranges, lemons and grape-fruit to rye, barley and wheat; the forest-trees from the palmettoes, cypress and magnolias to the ash, white pines and hemlocks. South Carolina leads the world in the yield of corn per acre, as demonstrated in world-contests; in the yield of upland cotton per acre; in the yield of rice per acre; in the quality of sea-island cotton; and in the quality of rice. South Carolina has the only successful tea-gardens in America. In cotton-manufacturing it is exceeded only by Massachusetts and North Carolina In volume of cotton crop it ranks fourth, the yield in 1910 being 1,116,000 bales.

Minerals. There are two valuable goldmines in operation, and several undeveloped gold mines. Rich deposits of kaolin and fine brick-clay extend entirely across the state. Granite quarries are numerous. A valuable tin-mine has recently been opened, and is proving a noteworthy success. There are deposits of iron, fuller's earth, manganese, monazite, asbestos, mica, nickel and many other minerals of commercial value, but the most valuable mineral resources are the beds of phosphate rock near Charleston and Beaufort. These deposits underlie the surface from six inches down to 12 feet. All the rocks in these sections are phosphates.

Education. The state provides free schools for all children between six and 21. The schools for the white and the colored race are separate. The state supports four institutions for the higher education of the white people: South Carolina University at Columbia, South Carolina Military Academy at Charleston, Clemson Agricultural and Mechanical College at Clemson; and Winthrop Normal and Industrial College (for girls) at Rock Hill; and one for Negroes, the Normal and Industrial and Mechanical College (for both sexes) at Orangeburg. The institution for the deaf, dumb and blind supported by the state is at Cedar Springs.

There are no works available for the South Carolina collection.