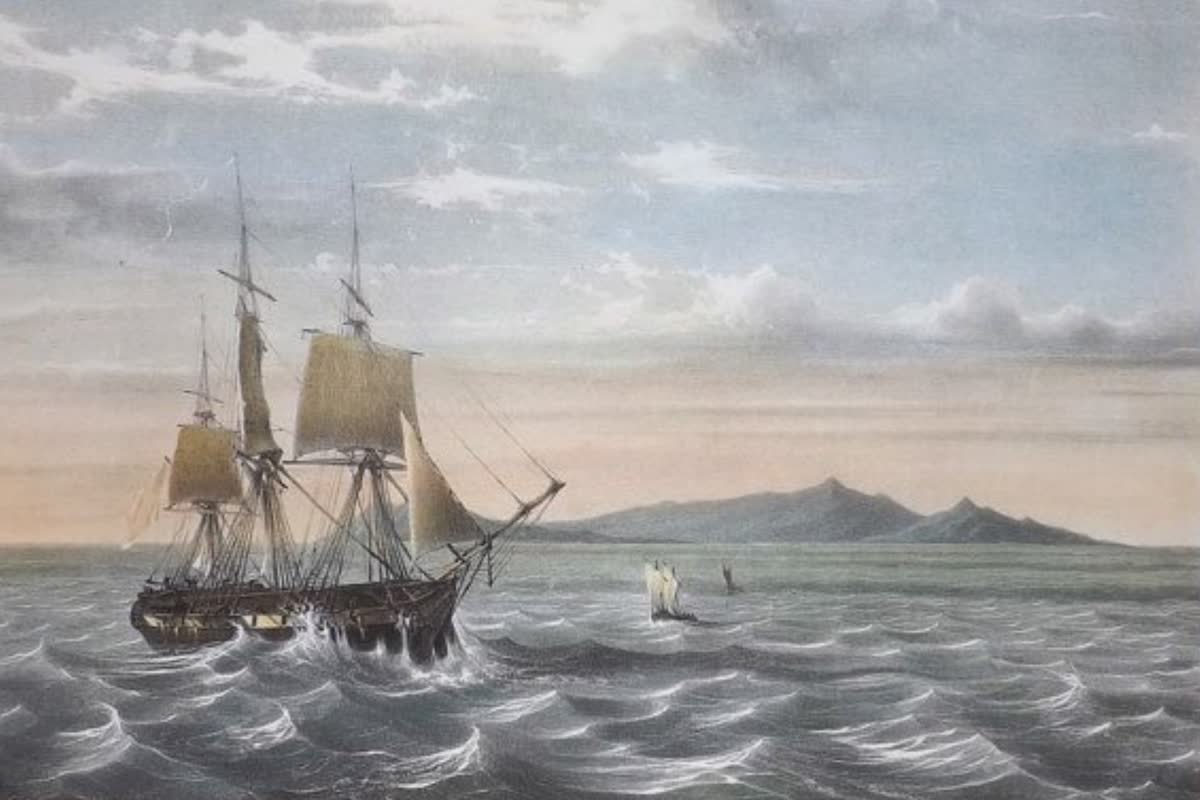 SOLOMON ISLANDS (Ger., Salomoinseln), an archipelago of the Western Pacific Ocean, included in Melanesia, and forming a chain (in continuation, of that of the Admiralty Islands and New Mecklenburg in the Bismarck Archipelago) from N.W. to S.E. between 154° 40' and 162° 30' E., 5° and 11° S., with a total land area of 17,000 sq. m. (For map, see Pacific Ocean.) A comparatively shallow sea surrounds the islands and indicates physical connexion with the Bismarck Archipelago and New Guinea, whereas directly east of the Solomons there are greater depths.

The Spanish navigator Alvaro Mendaña must be credited with the discovery of these islands in 1567, though it is somewhat doubtful whether he was actually the first European who set eyes on them. In anticipation of their natural riches he named them Islas de Salomon. The expedition surveyed the southern portion of the group, and named the three large islands San Cristoval, Guadalcanal and Ysabel. On his return to Peru, Mendaña endeavoured to organize another expedition to colonize the islands, but it was not before June 1595 that he, with Pedro Quiros as second in command, was able to set sail for this purpose. The Marquesas and Santa Cruz islands were now discovered; but on one of the latter, after various delays, Mendaña died, and the expedition collapsed.

Even the position of the Solomon Islands was now in uncertainty, for the Spaniards, fearing lest they should lose the benefits expected to accrue from these discoveries, kept secret the narratives of Mendaña and Quiros. The Solomon Islands were thus lost sight of until, in 1767, Philip Carteret lighted on their eastern shores at Gower Island, and passed to the north of the group; without, however, recognizing that it formed part of the Spanish discoveries. In 1768 Louis de Bougainville found his way thither. He discovered the three northern islands (Buka, Bougainville and Choiseul), and sailed through the channel which divides the two last and bears his name.

In 1769 a French navigator, M. de Surville, was the first, in spite of the hostility of the natives, to make any lengthened stay in the group. He gave some of the islands the French names they still bear, and brought home some detailed information concerning them which he called Terre des Arsacides (Land of the Assassins); but their identity with Mendaña's Islas de Salomon was soon established by French geographers. He called Gower, Inattendue; Ulava, Contrarieté; and named Port Praslin, the harbour at the north-west of Ysabel. In 1788 the English lieu- tenant Shortland coasted along the south side of the chain, and, supposing it to be a continuous land, named it New Georgia; and in 1792 Captain Edward Manning sailed through the strait which separates Ysabel from Choiseul and now bears his name. In the same year, and in 1793, d'Entrecasteaux surveyed portions of the coast-line of the large islands. Dumont d'Urville in 1838 continued the survey.

Traders now endeavoured to settle in the islands, and missionaries began to think of this fresh field for labour, but neither met with much success, and little was heard of the islanders save accounts of murder and plunder. In 1845 the French Marist Fathers went to Isabel, where Mgr Epaulle, first vicar-apostolic of Melanesia, was killed by the natives soon after landing. Three years later this mission had to be abandoned; but in 1881 work was again resumed. In 1856 John Coleridge Patteson, afterwards bishop of Melanesia, had paid his first visit to the islands, and native teachers trained at the Melanesian mission college subsequently established themselves there. About this date the yacht “Wanderer” cruised in these seas, but her owner, Mr Benjamin Boyd, was kidnapped by the natives and never afterwards heard of. In 1873 the “foreign-labour” traffic in plantation hands for Queensland and Fiji extended its baneful influence from the New Hebrides to these islands. In 1893 the islands Malaita, Marovo, Guadalcanar and San Cristoval with their surrounding islets were annexed by Great Britain, and the final delimitation of German and British influence in the archipelago was made by the convention of the 14th of November 1899.

The principal island at the north-west end of the chain is Bougainville (3900 sq. m.), and that at the south-east San Cristoval or Bauro. Between these the chain is double, consisting (from the north-west) of Choiseul (2260 sq. m.), Isabel (Ysabel, of about the same area as Choiseul) and Malaita (2400 sq. ni.) to the north, and Vella Lavella, Ronongo, Kul- ambangra, Kausagi, Marovo (New Georgia or Rubiana) and the Hammond Islands, and Guadalcanar or Guanbata (2500 sq. m.). This was the Guadalcanal of the Spanish discoverers. Between and around these main islands there are many smaller islands. Ongtong Java, a coral reef of many islets, lies considerably north of the main group to which, geographically, it can hardly be said to belong. This group, so named by Abel Tasman in 1643, is also called Leucnewa or Lord Howe, and is densely inhabited by natives said to be of Polynesian, origin.

Bougainville, the largest of the group, contains Mt Balbi (10,170 ft.), and two active volcanoes. In Guadalcanar is Mt Lammas (8000 ft.), while the extreme heights of the other islands range between 2500 and 5000 ft. The islands (by convention of 1899) are divided unequally between Great Britain and Germany, the boundary running through Bougainville Strait, so that that island and Buka belong to Germany (being officially administered from Kaiser Wilhelm's Land), but the rest (South Solomons) are British. The islands are well watered, though the streams seem to be small; the coasts afford some good harbours.

All the large and some of the small islands appear to be composed of ancient volcanic rock, with an incrustation of coral limestone showing here and there along the coast. The mountains generally fall steeply to the sea. There is some level land in Bougainville, but little elsewhere. Deep valleys separate the gently rounded ridges of forest-clad mountains, lofty spurs descend from the interior, and, running down to the sea, terminate frequently in bold rocky headlands 800 to 1000 ft. in height, as in San Cristoval (north coast). On the small high island of Florida there is much undulating grass-land interspersed with fine clumps of trees; patches of cultivated land surround its numerous villages, and plantations on the hill-sides testify to the richness of its soil. The whole chain of islands appears to be rising steadily. Some of the smaller islands are of recent calcareous formation. Barrier and fringing reefs, as well as atolls, Occur in the group, but the channels between the islands are dan- gerous Chiefly from the strong currents which set through them.

The climate is very damp and debilitating. The rainfall is unusually heavy. Fever and ague prevail on the coast. The healthiest portions are the highlands, where most exposed to the south-east trades. The dry season, with north-west winds, lasts from December to May. Vegetation is luxuriant; magnificent forests clothe the mountains, and sandalwood, ebony and lignum vitae, besides a variety of palms, are found in them. Mangrove swamps are common on the coasts. The probable geological connexion with New Guinea would account for the Papuan character of the fauna of the Solomons, which form the eastern limit of certain Papuan types. The existence of peculiar types in the Solomons, however, points to an early severance. Mammals are not numerous; they include the cuscus, several species of bat, and some rats of great size. There are various peculiar species of frogs, lizards and snakes, including the great frog Rana Guppyi, from 2 to 3 ? in weight. Of birds, several parrots and other genera are characteristically Papuan and are unknown east of the Solomons.

Population.—The Solomon islanders are of Melanesian (Papuan) stock, though in different parts of the group they vary considerably in their physical characteristics, in some islands approaching the pure Papuan, in some showing Polynesian crossings and in others resembling the Malays. As a race they are small and sturdy, taller in the north than in the south. Projecting brows, deeply sunk dark eyes, short noses, either straight or arched, but always depressed at the root, and moderately thick lips, with a somewhat receding chin, are general characteristics. The mesocephalic appears to be the preponderant form of skull; though this is unusual among Melanesian races. In colour the skin varies from a black-brown to a copperish hue, but the darker are the most common shades. The hair is naturally dark, but is often dyed red or fawn, and crisp, inclining to woolly. The islanders of the Bougainville Straits have lank, almost straight, black hair and very dark skins.

To strangers the natives have long had the reputation of being treacherous. They are cannibals, infanticide is common, and head hunting was formerly prevalent. The average lot of the women is that of slaves. In some cases there is belief in a good spirit inhabiting a pleasant land, and an evil spirit associated with a volcano; also in a future life. The language is of pure Melanesian type, though a number of dialects are spoken. The natives are good agriculturists. The Solomon Islands are, in the Pacific, the eastern limit of the use of the shield. The canoes are skilfully built of planks sewn together and caulked. The high carved prow and stern give the craft almost a crescent shape. These and the gunwale are tastefully inlaid with mother-of-pearl and wreathed with shells and feathers.

The British islands are under a resident commissioner, and have some trade in copra, ivory, nuts, pearl shell and other produce. Coco-nuts, pine-apples and bananas, with some cocoa and coffee, are cultivated on small areas. The German islands have a small trade in sandalwood, tortoise-shell, &c. The total population may be roughly estimated at 180,000.