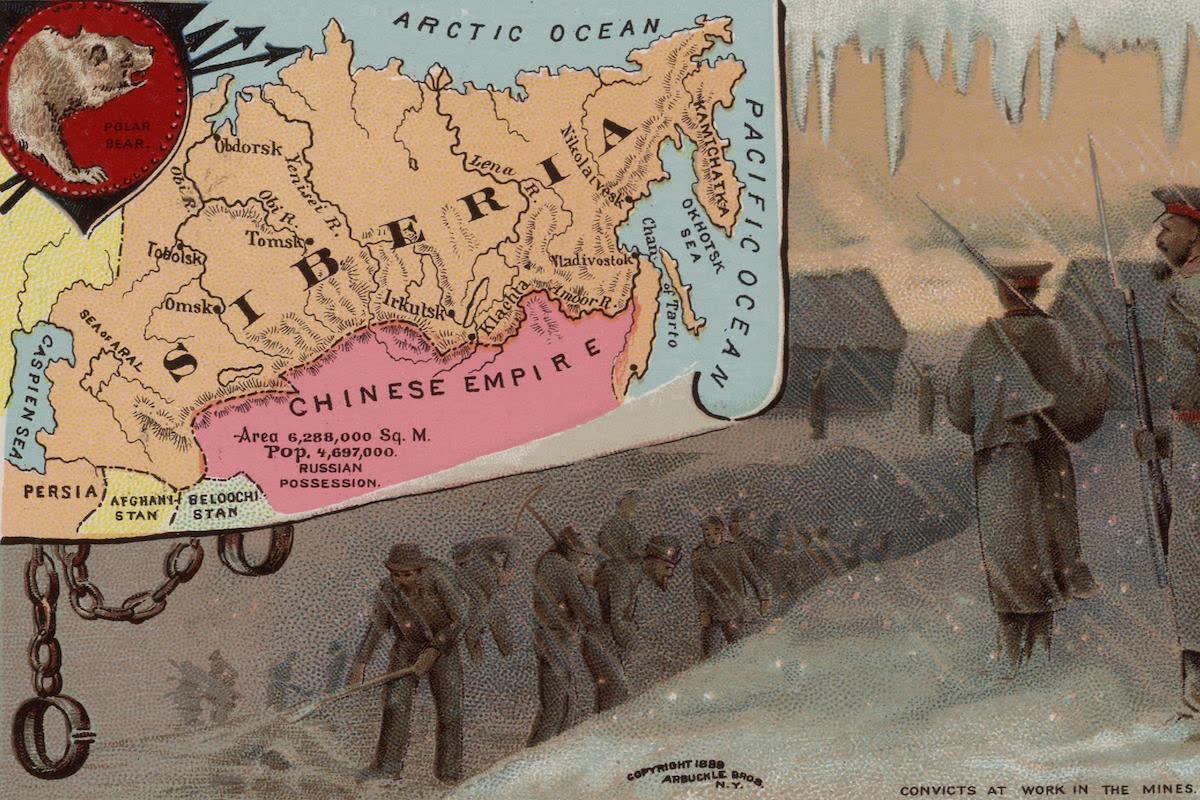 Siberia (s??-b?? r?-a), a vast territory belonging to Russia in northern Asia. It covers 4,786,730 square miles, stretching from the Chinese empire to the Arctic Ocean. The earliest inhabitants are by some writers called Yeniseians, who were followed by a race of considerable skill, judging from their relics found in mounds. Turks conquered the country in the 9th century, and were themselves conquered by the Mongols two centuries later.

Russians first invaded the region in 1580, by a band of Cossack robbers, followed for two centuries by other bands of Cossacks, traders, hunters, dissenters flying from religious persecution and peasants escaping from serfdom. In the first 80 years the Cossacks had reached the Sea of Okhotsk, but Russia’s possession was not acknowledged by China before 1857. Bering Strait was discovered in 1648 by Dejnef, the Cossack, who sailed around the northeastern end of Asia; but, as his discovery was not made known, the honor still belongs to Bering. Consult Lansdell’s Through Siberia; Kennan’s Tent-Life and Siberia and the Exile System; and Dewindt’s The New Siberia.

Surface. A large part is only imperfectly known. It is covered with a network of highlands and mountain-ridges, of which the Great Altai and Sayan Mountains, separating Siberia from Mongolia; the Barguzin and South Muya ridges, svith others still unnamed; and the Stanovoi Mountains, which form a high wall on the coast of the Sea of Okhotsk, are the most important. Some of the peaks of the Altai Mountains and a few others rise into the region of perpetual snow. A belt of forests on the northwestern border of the central plain and, beyond that, another belt of high plains 500 miles wide, 1,700 to 2,500 feet high and most of it very fertile, end in an immense lowland stretching to the shores of the Arctic Ocean.

These lands in western Siberia are very fertile, are the granary of Siberia, and contain one third of the population. Between Obi and Irtish Rivers are great marshes, which can be crossed only when frozen; and, farther north still, come the tundras (salt prairies and frozen swamps), where the ground is frozen hundreds of feet deep and thaws only on its surface in the summer. Trees disappear, only a few low bushes and a few flowering plants surviving the cold. Yet 50,000 human beings call this region home, and wander over it with sledges drawn by reindeer and dogs. In southeastern Siberia, in the Amur province, are high plains, covered with oak forests and rapidly filling with emigrants from Russia; while there are fertile tracts on the frontier of Korea and a splendid harbor at Vladivostok on Peter the Great Gulf.

Drainage and Climate. Great rivers — the Obi, Yenisei, Irtish, Lena and Amur, being some of them — greatly assist internal communication in this great country, and four lines of railroad have already entered Siberia on the west, one of which, the trans-Siberian line (q. v.) opened in 1899, established uninterrupted steam-communication through the Russian empire. Siberia is the coldest country in the world. Yet the summers are much warmer than is usually supposed; melons grow in the open air in some parts, and barley sown in May will ripen by August. The summers, however, are short, and by November all the rivers are frozen, and in the extreme north the thermometer has recorded 75° below zero. The air is very dry and there is no wind, which makes the cold more endurable.

Inhabitants. Siberia had a population of 8,220,100, January 1, 1910, according to the Russian Statistical Committee. These figures include native Siberians, Koreans, Manchurians, Chinese and about 90,000 Russian immigrants each year. The Russians belong to the Greek church; the Turkish tribes are Mohammedans; while others are Buddhists.

Natural Resources. Siberia is rich in minerals, but mining is undeveloped; gold, silver, lead, copper and iron are mined, however, in considerable quantities, a profitable trade in timber is carried on, and the coal-mines yield over five million tons annually.

Occupations. The chief occupations are farming and cattle-breeding. In a single year 11 million acres were in meadow-land, 9,773,000 in cereal crops and 171,000 in potatoes. The wheat-crop in 1910 was 45,000,000 bushels; the oat-crop of Asiatic Russia 79,743,000 bushels, the larger part coming from Siberia. The live-stock industry is quite valuable, and horses, cattle, sheep and pigs are raised in considerable numbers. Hunting is profitable for the valuable furs of the sable, ermine, gray and white foxes; and fishing is carried on extensively.

Manufactures. Government factories are operated in some of the larger towns, and porcelain, hardware, leather and earthenware are among the products. Extensive woolen and linen factories are among the industries. In Asiatic Russia there are 8,005 miles of railroad. There are 339 schools, supported in the main by local authorities, with 773 teachers and 43,786 pupils.