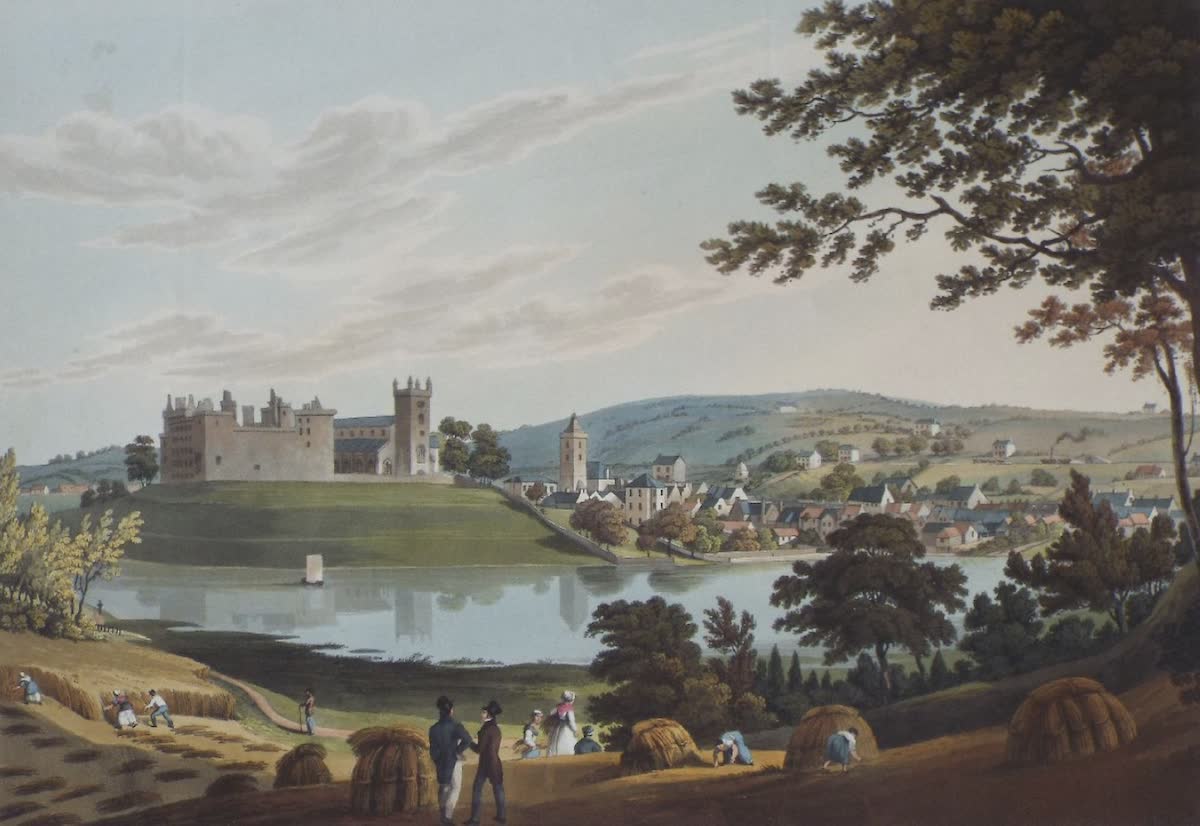 Scotland is one of the political divisions forming the British Empire, and is the northern part of Great Britain, surrounded by the ocean on all sides except the south, where it touches England. It is 274 miles long and from 24 to 146 miles wide, including 29,796 square miles, which makes it about as large as Indiana. The coast of 3,000 miles is deeply indented, so that very few places are more than 40 miles from the sea, and there are 186 islands, mostly in the Hebrides, Orkney and Shetland groups.

Solway Firth, Liddel and Tweed Rivers and Cheviot Hills separate Scotland from England. The rivers, flowing mostly to the sea, are not large, the Clyde of 106 miles being the longest. The Tweed, Forth, Tay and Dee are well-known, as are also the beautiful fresh-water lakes of Loch Lomond, Loch Katrine, Loch Leven etc. The division of the country into Highlands and Lowlands is rather a division of race than of country, for, though the Highlands include the more mountainous parts of the country, they have rich, level tracts, while there is hardly any part of the Lowlands without mountains.

The Highlands are that part of the north and northwest of Scotland, where the Celtic language and customs still linger, and include the Hebrides, but not the Orkneys and Shetlands, where the people are of Norwegian origin. There are nearly 200 mountain-peaks in Scotland over 3,000 feet in height, the highest being Ben Nevis, 4,406 feet. The northern Highlands, the Grampians and the Cheviot Hills, with their beautiful glens and mountain lakes make the famous scenery of Scotland. The nearness of the ocean tempers the climate, so that the thermometer rarely falls to zero in winter or rises above 80° in summer.

The animals and plants resemble those of England. About half of the birds are waterbirds, and fish, especially shellfish, abound. The country is not well-adapted to agriculture, because of its cool summers, late springs and heavy rains, but it is carried on with great care and the use of the most improved methods; and in the wildest mountain-regions sheep graze.

The fisheries form an important industry, especially the salmon, herring, cod and ling. The salmon is so abundant that before it was sent to England in large quantities, servants used to make a condition that they should not be fed upon it more than three times a week. The principal minerals are coal, iron known in the United States as Scotch pig, lead, granite, sandstone and other fine building-stones. The linen, cotton and wool manufactures are large, and there are silk, hemp, hosiery, hats, leather and soap factories and large breweries and shipyards.

Scotland, since its union with England, sends 16 peers to the house of lords and elects 72 members to the house of commons. It has its own courts and its state religion, which is Presbyterian. Its common-school system, going back to 1695, made the Scottish people of the i8th century the best educated in Europe. There are four universities, Glasgow, Aberdeen, Edinburgh and St. Andrews.

The early inhabitants were the Picts, a collection of Celtic tribes, and by the Romans the country was called Caledonia. The Scots were a tribe from Ireland, then called, Scotia, who settled on the western coast of Caledonia, and the kingdom of the Picts and Scots seems to have been first called Scotland in the loth century. There are Pictish kings mentioned in early Scotch history. The Saxons settled in the lowlands in 449, and one of their leaders, Edwin, founded Edinburgh (Edwin's burgh). The introduction of Christianity into Scotland by Irish missionaries dates back to the 6th century.

In the 9th century the Scots became the leading power in the country, and the government was in the hands of Prince Kenneth Macalpin. The first great battle of Scottish princes on English soil was fought in 937 between Constantino their king, aided by the Danes, and Saxon King Athel-stan. During the reign of Malcolm, the son of Constantine, Edmund, king of England, restored to that prince a part of the Cambrian kingdom, which Edmund had wrested from the Britons, and this grant was the pretext for the claim of homage from the Scottish rulers, made by the English kings for so many years. Malcolm II, Duncan and Macbeth, a usurper, the next three kings of Scotland, are well-known through Shakespeare's tragedy.

Malcolm III defeated Macbeth in 1057. His wife was Margaret, the sister of Edgar, the Atheling of England, and her influence and that of his own life in England led to the introduction of English customs; while the tyranny of William the Conqueror drove large numbers of the Saxons into Scotland, The three sons of Malcolm who succeeded him, Edgar, Alexander and David, continued their father's policy; David was to Scotland what Arthur was to Britain. He established Norman, English and French colonies, introduced a system of written law, and placed the religion of the country on a new basis, providing for the support of the clergy and the building of churches. His grandsons, Malcolm IV and William the Lion, and Alexander II, the son of William, bring the list of Scottish kings to Alexander III, one of the ablest and best of their rulers. His sudden death in 1286 ended the period of Scotland's prosperity that had lasted for 400 years. The struggle for the succession between Balliol and Bruce and the ambition of Edward I of England, who had conquered Wales, to add Scotland to his kingdom, brought in the series of conflicts under Wallace and Bruce, ending in the battle of Bannockburn.

Robert I (Robert Bruce) was succeeded by David, his infant son, and his grandson Robert, who, as Robert II, heads the list of the Stuart sovereigns of Scotland, which numbers fourteen; an unfortunate race, including Robert II; Robert III, who died of grief, with his older son murdered and his younger son an English captive; James I, for eighteen years a prisoner in England and finally murdered; James II, killed in battle; James III, murdered with his son in rebellion against him; James IV, killed at Floddem; James V, who died broken-hearted at the rout of Solway Moss; Mary, twice a widow and twenty years a captive, beheaded at Fotheringay Castle; and James VI of Scotland and I of England. The ferns of the powerful nobles of Scotland and the struggles with England kept the country in a state of turmoil. In 1503 James IV married Margaret of England which finally resulted in the Union of the two kingdoms. Under James V religious struggles added to the troubles of the country, and James VI became king of England on the death of Elizabeth in 1603.

The Scotch parliament met for the last time in 1706. The leading statesmen of both Scotland and England felt that nothing but a complete union of the two countries would bring about permanent peace, and, though opposed by a majority of the people, the Scottish parliament passed the Act of Union on Jan. 16, 1707. The union was unpopular in Scotland for many years, but with the evident prosperity of the country under the new arrangement discontent gradually disappeared; though Scotland and England are still two countries, and a Scot abroad, if asked if he is an Englishman, will seldom answer "yes." The Gaelic language used in the west and north of Scotland is a Celtic dialect, while the Lowland Scotch is a form of the Saxon, being the same as the northern English of Northumbria. The dialects are many, classed as Border Scotch, Central Scotch and Northeastern Scotch. The chief cities of Scotland are Edinburgh the capital (population 355,366), Glasgow (872,021), Dundee, Aberdeen, Leith, Paisley and Greenock.

See Scotland under Early Kings, by Robertson; Scotland as It Was and as It Is, by Argyll; Scotland from the Earliest Century to the Present Time, by Mackintosh.